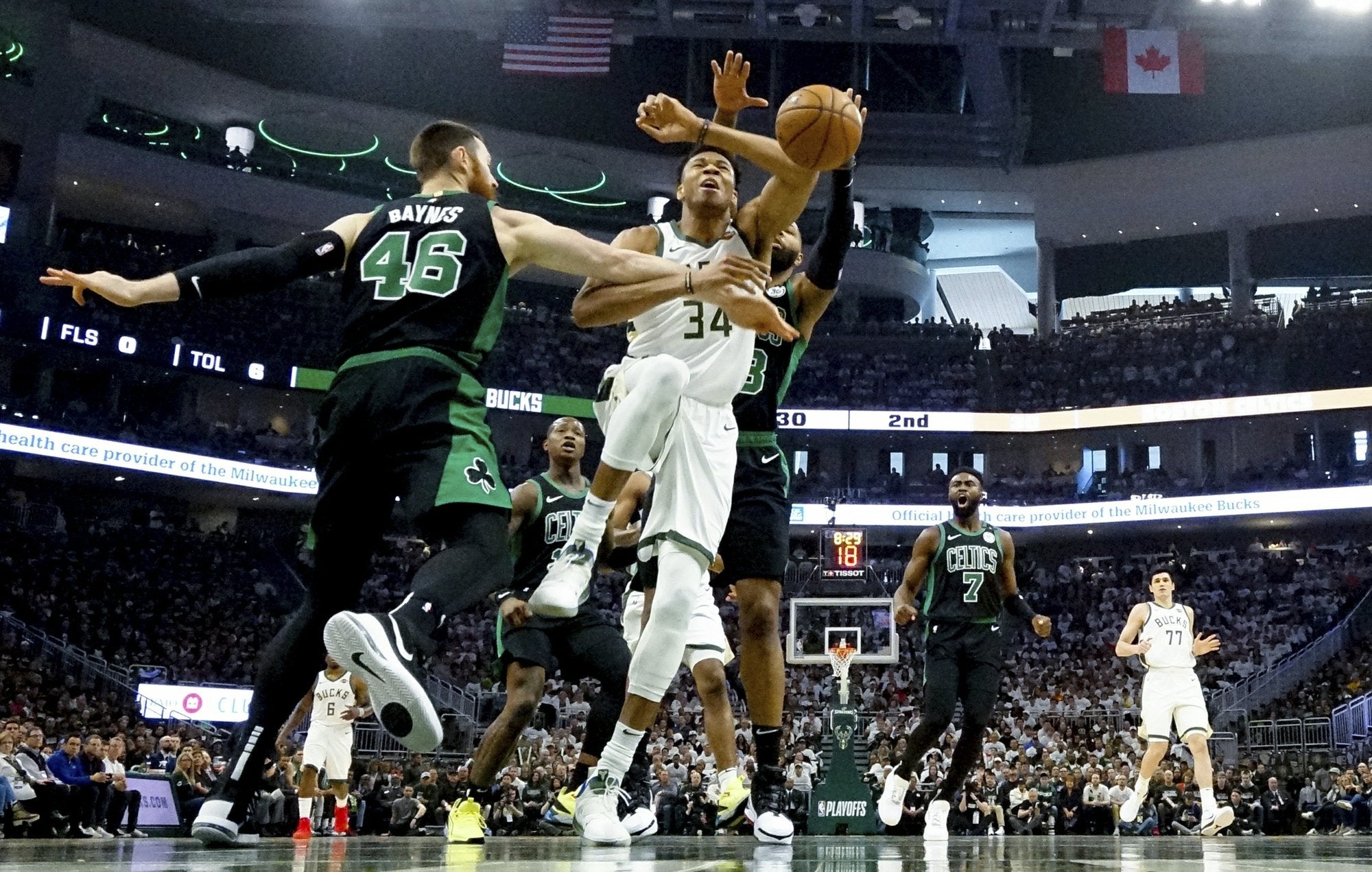 Milwaukee Bucks’ Giannis Antetokounmpo is fouled during the first half of Game 1 of a second round NBA basketball playoff series against the Boston Celtics Sunday, April 28, 2019, in Milwaukee. (AP Photo/Morry Gash)

Antetokounmpo, the Milwaukee Bucks’ MVP candidate, desperately wanted to provide a spark and cut into a second-half lead against Horford’s Boston Celtics in the opener of a second-round playoff series on Sunday. He drove hard into the lane, quickly switched directions and tried to lay the ball up over Horford, who met him at the rim and blocked the shot.

Antetokounmpo corralled the ball and went up a second time only to be met by Horford again, who this time spiked the ball to the court.

The Celtics clamped down on Antetokounmpo all game and cruised past the Bucks, 112-90.

“Our focus was to make sure that we just made it tough on him every time, just making sure he earned everything he got,” Horford said. “I felt like we did a pretty good job of that.”

Kyrie Irving had 26 points and 11 assists, tying his playoff career high, and Horford added 20 points and 11 rebounds to pace Boston, which controlled the game for long stretches while playing stingy defense against Antetokounmpo.

Jaylen Brown chipped in with 19 points and Gordon Hayward had 13 off the bench for the Celtics.

Antetokounmpo scored 22 points but shot just 7 for 21. He didn’t make his first field goal until the first minute of the second quarter.

“It was one of the toughest losses we’ve ever had, all season, especially at home,” Antetokounmpo said.

Game 2 is Tuesday in Milwaukee.

Bucks coach Mike Budenholzer is expecting his star player to bounce back.

“As great as he’s been, he hasn’t been perfect every night,” Budenholzer said. “He’s hard on himself, so there will probably be some point where I put my arms around him and tell him, ‘You’re going to be great.’”

Khris Middleton had 16 for Milwaukee, which completed a four-game sweep of the Detroit Pistons on Monday and advanced to the second round of the playoffs for the first time since 2001. The Celtics came off a sweep of their own against Indiana.

The Celtics knocked Milwaukee out of the playoffs in seven games last year, winning the final game at home. This year, Milwaukee is the top seed in the East and has home-court advantage throughout the postseason after posting the NBA’s best record, but Boston didn’t play like an underdog in any way.

The Celtics jumped out early, leading by as many as 11 in the opening quarter. Boston shot 52% while the Bucks shot only 5 of 19.

The shooting woes continued for the Bucks until midway through the second quarter, when Milwaukee used a 15-0 run to pull even at 40. The teams then traded baskets with the Celtics grabbing a 52-50 lead at the half.

Boston used a 9-0 run in the third quarter to again build a double-digit lead, which grew to as much as 21 as Milwaukee again failed to make shots.

“This is a hard team to play against,” Celtics coach Brad Stevens said. “That wasn’t their best game.”

Irving thinks the Celtics have been rounding into shape in the playoffs after an uneven regular season.

“We were dealing with our ups and downs, but I think we just have an appreciation for the group that we have,” he said.

Celtics: Boston players wore a black stripe with the No. 17 on their jerseys to honor Hall of Famer John Havlicek, who died Thursday at the age of 79. The team won eight championships during Havlicek’s 16 seasons with the Celtics. Havlicek was the MVP of the 1974 NBA Finals when the Celtics defeated the Bucks in Game 7 at the MECCA in Milwaukee. A moment of silence was held before tipoff. … G Marcus Smart traveled to Milwaukee but wasn’t in uniform. Smart has been out since suffering a left oblique tear on April 7. Smart has been practicing with the team but isn’t expected play in Game 2 either. “I don’t see any way that he’s available until what we thought initially, four to six (weeks) and I said at the start that four seems awfully aggressive,” Stevens said. ….F/C Aron Baynes left the game in the third quarter after rolling his left ankle.

Bucks: Starting guard Malcolm Brogdon, who is recovering from a partially torn plantar fascia in his right foot, remained out but took part in shooting drills before the game. He’s also expected to miss Game 2 before being re-evaluated. The 2017 Rookie of the Year has been out since March 15. … Center Pau Gasol (left foot soreness) was inactive. He missed the final 15 regular-season games and didn’t play in the opening round.

The teams had to deal with an unusual noon tip time. “You play when you are told to play,” Stevens said. “If you aren’t ready because of the time of the day, you’re probably not going to be successful anyway.”

The Celtics had six days off and the Bucks five. “Guys are sick of practice. Guys are sick of film. They are ready to play,” Stevens said. The extended layoff created challenges, Budenholzer said. “We tried to balance rest and getting healthy and working on our execution and our game plan and playing, letting them keep their rhythm,” he said.