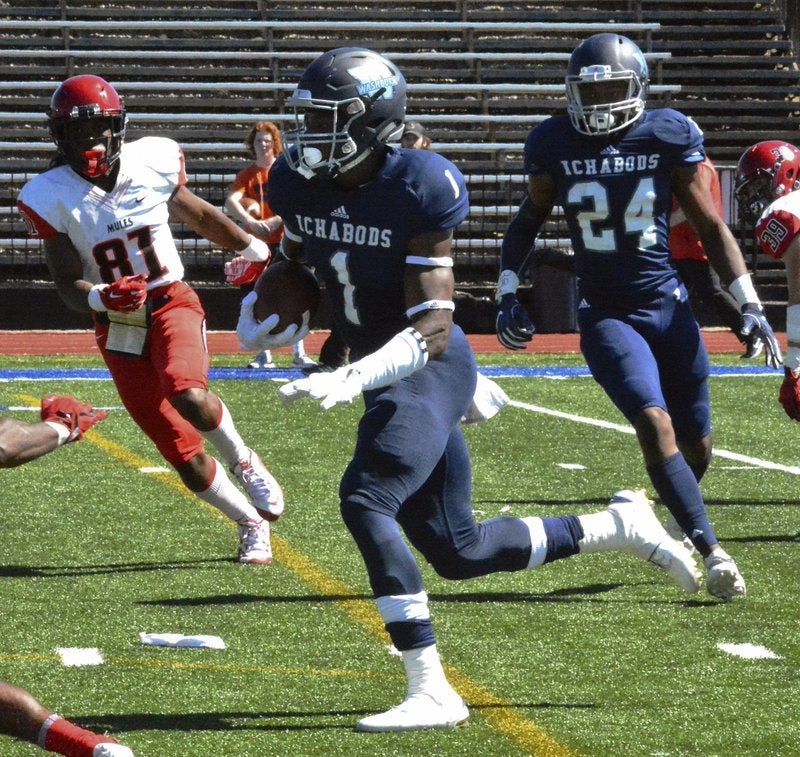 In this Sept. 22, 2018 photo, Washburn defensive back Corey Ballentine carries the ball during an NCAA college football game in Topeka, Kan. Police in Kansas are investigating a shooting that killed one current Washburn University football player and injured a former player just hours after he was drafted by the New York Giants. Topeka police say officers found 23-year-old defensive back Dwane Simmons dead when they investigated gunshots shortly before 1 a.m. Sunday, April 28, 2019. Ballentine is the wounded player who was picked by the Giants in the sixth round of the NFL draft Saturday. (Phil Anderson/Topeka Capital-Journal via AP)

TOPEKA, Kan. — Washburn University’s joy over one of its own going to the pros quickly shifted to grief this weekend after a shooting killed a current Washburn football player and wounded the former member of the team who was drafted by the New York Giants just hours earlier.

Police in Topeka, Kansas, where the university is located, said officers found 23-year-old defensive back Dwane Simmons dead when they investigated gunshots shortly before 1 a.m. Sunday. Cornerback Corey Ballentine was wounded, but his injuries were not believed to be life-threatening. Ballentine, also 23, grew up in Topeka and was picked by the Giants on Saturday in the sixth round of the NFL draft.

A preliminary investigation determined that the shooting occurred during a social gathering outside a residence, Topeka police spokeswoman Gretchen Koenen said in an email Sunday evening. She said dozens of people were at the gathering and police were working to gather evidence and witness statements.

“We want to emphasize that we need those who were present to let us know what they saw,” Koenen said.

Washburn president Jerry Farley said, “This was a terrible way to end a day which should have been a day of celebration and a day to look forward to Dwane’s upcoming year at Washburn and the beginning of Corey’s professional career.”

“Dwane is one of the most energetic and well-liked players I have ever coached at Washburn,” Schurig said. “Dwane’s infectious smile and love for football and his teammates was truly inspirational.”

Farley said both Simmons and Ballentine have been great representatives of the university.

It’s not yet clear how Ballentine’s injuries from the shooting might affect his football career.

In a statement Sunday, the Giants said, “We are aware of the tragic situation and continue to gather information. We have spoken to Corey, and he is recovering in the hospital. Our thoughts are with Dwane Simmons’ family, friends and teammates and the rest of the Washburn community.”