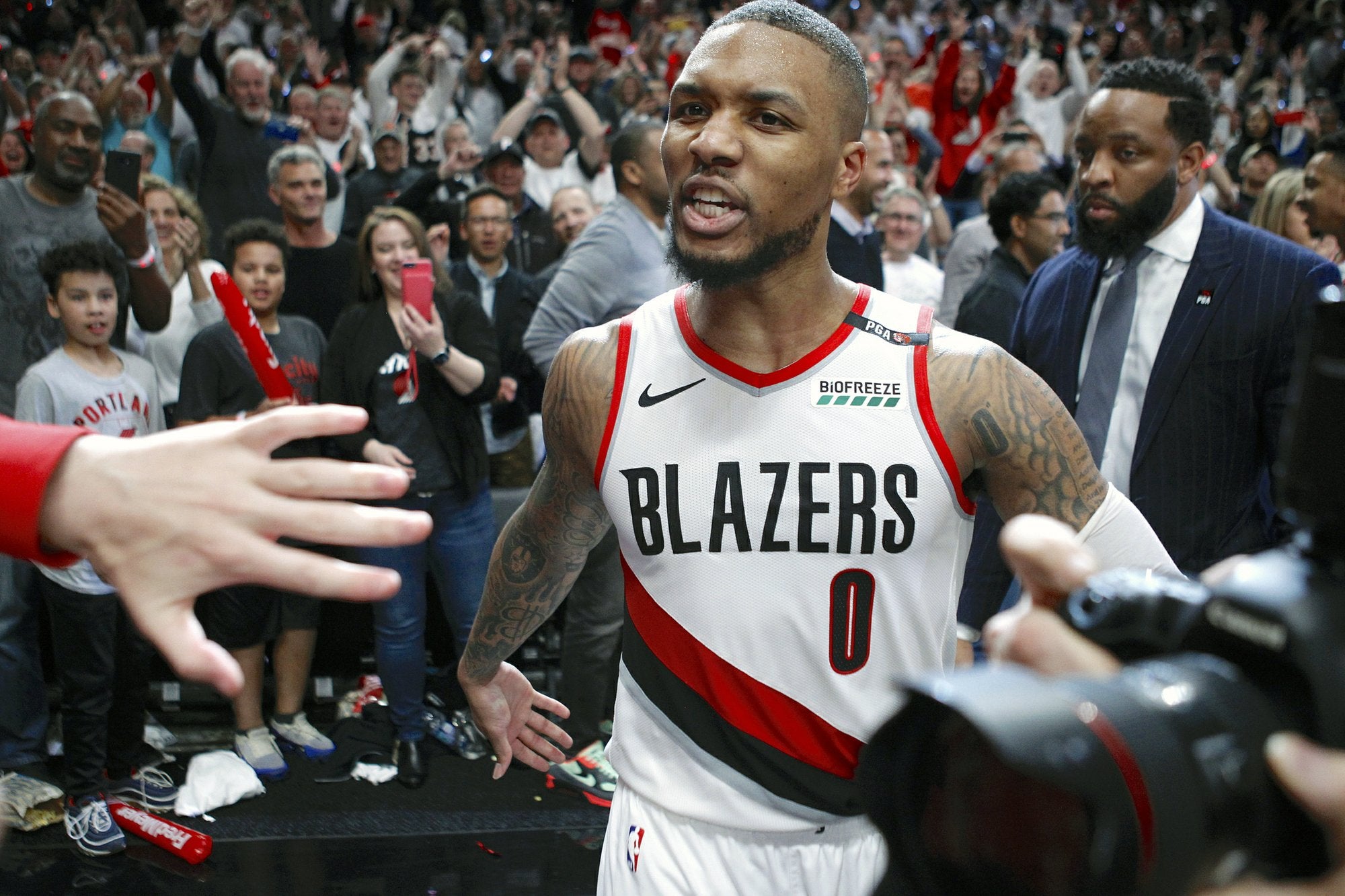 PORTLAND, Ore. — After he made his unforgettable 3-pointer at the buzzer to clinch Portland’s first-round series over Oklahoma City, Damian Lillard was mobbed by his teammates.

The television camera moved into the scrum, and Lillard looked directly into the lens. His expression was pure told-you-so.

“Obviously he can score the ball with the best of them. But Dame has a chip on his shoulder, and he has since the day he walked into this league,” said Golden State Warriors forward Draymond Green. “Just the way he grinds, he played like a guy from Oakland with a chip on his shoulder and a guy who has been doubted forever.”

The doubters don’t bother the 6-foot-3 Lillard. They seem to motivate him, fuel his hunger to prove them wrong.

He enters the NBA conference semifinals on a roll, as confident as ever.

And it’s not just because of the 37-footer that eliminated the Thunder: He had 50 points in last Tuesday’s deciding game, a 118-115 Game 5 victory that sent the Blazers through to the Western Conference semifinals for the first time in three seasons. He had 34 points in the first half and finished with 10 3-pointers, second most ever in the playoffs.

He averaged 33 points over the five games against the Thunder, best for a playoff series in franchise history.

He has the Nuggets attention — along with the rest of the NBA.

Lillard averaged 23.8 points per game to lead the Blazers in the regular season. Portland finished third in the Western Conference with 53 wins for a sixth straight appearance in the playoffs. Lillard has been on each of those teams.

“This was not a coming-out party. This is who he is,” said Blazers guard Seth Curry. “You watch basketball, you pay attention, you watch highlights, you know who he is as a player. He has done this all year and he’s been doing this every year.”

It seems the 28-year-old Lillard has spent his entire basketball career off the radar.

Lillard didn’t get a lot of interest from recruiters when he was a kid growing up in Oakland, California, and wound up at Weber State. He grabbed Portland’s attention and after an impressive hour-long solo workout and a dinner with owner Paul Allen, the Blazers took him with the sixth overall pick in the 2012 draft.

Now a four-time All-Star, Lillard had another series-clinching 3-pointer, back in 2014 in the first-round against the Houston Rockets.

For the past several years, the Blazers have had a reputation as the West’s overachieving underdogs — a smaller market team that always puts up a fight in a conference dominated by the Warriors. In a way, the whole team has taken on Lillard’s prove-them-wrong persona.

Portland has been swept in the postseason’s opening round for the past two seasons. Last season especially stung because the Blazers were a third seed with homecourt advantage over New Orleans.

Lillard was asked at practice this week whether the Blazers are playing with a chip on their collective shoulder, given the recent past. His drew on his own story when talking about his teammates.

“Over time you’ve gotta grow and you gotta move on from stuff. You gotta let it play its part, you can’t just hold to it,” he said. “I know what my story is, I know I was under recruited, I went to a small school but I don’t come in here every day like ‘They didn’t want to recruit me.’ It was what it was. It kind of pushed me to where I was at that time.

“Then you just move on to the next thing. I think that’s where we are.”

Lillard has moved on from the first-round series, from the shot and perhaps from his past. While he’s known to point to his wrist after big shots, indicating “Lillard Time,” it’s now as if that’s no longer necessary.

“It’s was a great, great feeling to go out that way, and get that series,” Lillard said. “But at the end of the day it’s just the first round, you don’t want to get too emotionally excited about it, and try to trying to move forward and lay an egg because you’re too emotional about this whole thing. It’s a great feeling, I’m excited about it. But I’m ready to move on.”