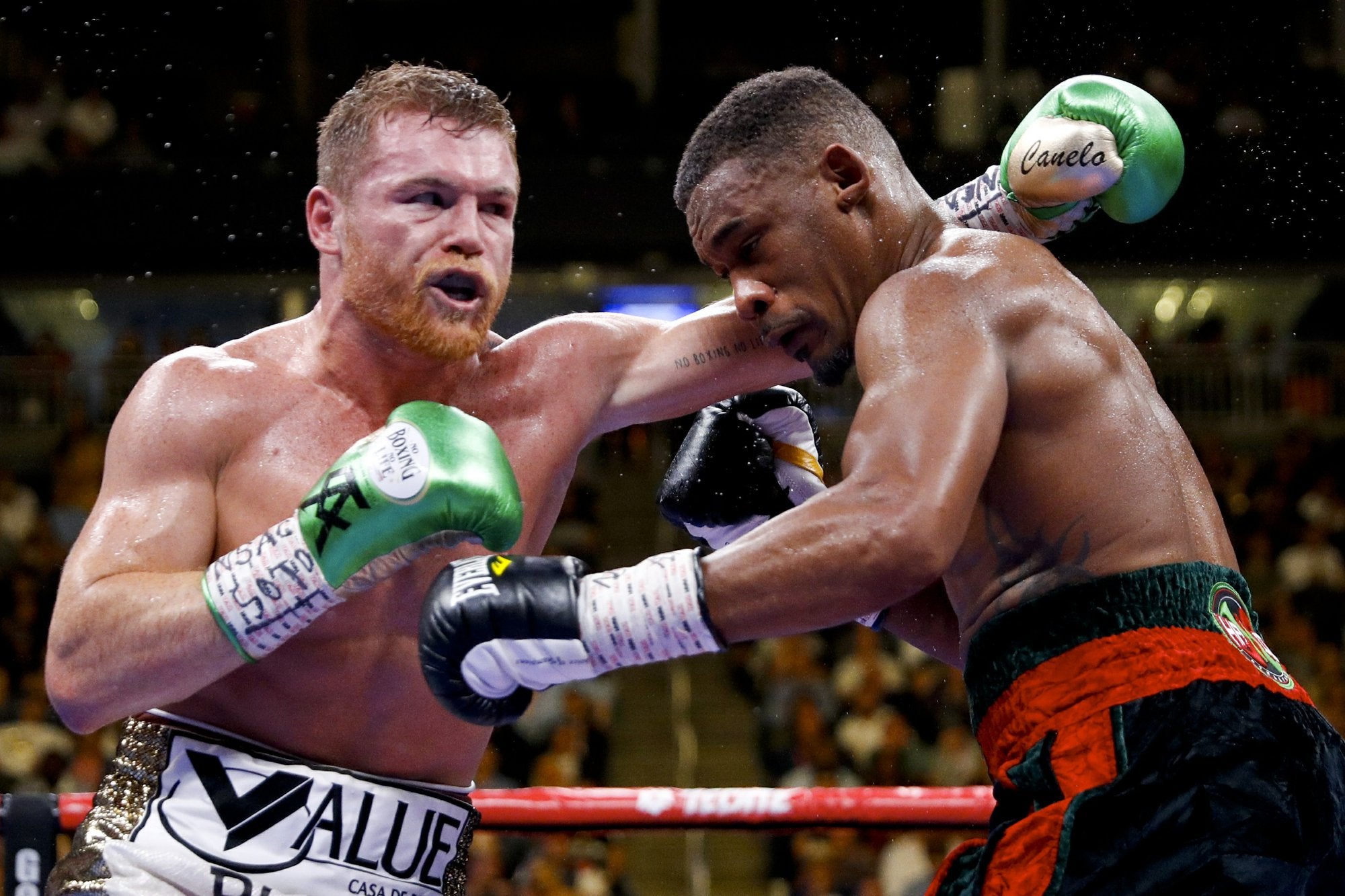 LAS VEGAS — Daniel Jacobs was bigger. Canelo Alvarez was better — but not by much.

Alvarez added another title belt to his collection Saturday night by winning rounds early and outboxing Jacobs in their middleweight showdown to take a close but unanimous 12-round decision.

“It was just what we thought,” Alvarez said. “We knew it would be a difficult fight. We just did our job.”

Jacobs, who lost $1 million out of his purse by not making the contracted weight the morning of the fight, was clearly bigger than Alvarez and landed perhaps the biggest punch of the fight in the ninth round when he connected with a left hook.

But Alvarez was fast and quick and kept Jacobs off balance with his movement as he won a narrow decision in the same arena where he fought to a draw and a close win over Gennady Golovkin.

“He’s a pot shotter,” Jacobs said. “I felt I did enough to get the victory.”

The judges didn’t, though, largely because Alvarez was more active early and was the more aggressive of the two fighters. Alvarez built a lead early, winning the first five rounds on one scorecard and four of the five on the other two.

But Jacobs seemed to find himself midway through the fight and roared back to make it competitive on the scorecards. He won the 12th round on two of the three scorecards.

Alvarez, a 5-1 favorite at fight time, was tested but did enough to win in a fight that had no knockdowns and no serious fouls. Neither fighter ever appeared badly hurt, though Jacobs landed some of the bigger punches in the late rounds.

That included the left hook in the ninth that seemed to shake Alvarez, if only for a moment.

“It was a hard shot but I went to the corner and they asked me and I said it was no big deal,” Alvarez said. “I continued with the fight. What do you want?”

Alvarez, the red-headed Mexican sensation, earned $35 million for risking his titles against Jacobs, a Brooklyn fighter who held a piece of the middleweight crown himself. He got another $1 million from the purse of Jacobs after Jacobs weighed in too heavy the day of the fight.

Jacobs had weighed in at the class limit of 160 pounds at the official weigh-in on Friday. But the two boxers had agreed in their contract not to weigh more than 170 pounds Saturday morning and Jacobs weighed 173.6.

Alvarez was aggressive from the opening bell, throwing punches with intent while Jacobs was content to try and fight from the outside while backing up most of the time. Neither fighter landed any sustained flurries, but Alvarez had more snap to his punches and landed them with more consistency.

By the middle rounds, Jacobs was switching from conventional to southpaw and back again, trying to find a rhythm. But Alvarez kept moving his head and making Jacobs miss, and often found him with a counter.

The two traded punches on several occasions, and Jacobs landed his biggest punch with a left hook in the ninth round that got the attention of Alvarez.

Alvarez (52-1-2) had lost only once in his career, dropping a decision five years ago to Floyd Mayweather Jr. in a fight he acknowledged later he was not ready for.

He entered the ring a 5-1 favorite over Jacobs (35-3-1), who narrowly lost his own fight with Triple G in 2017. Jacobs, who beat the odds by beating cancer in 2011, had vowed he would beat them again by beating Alvarez but it was not to be.

“I got the short end of the stick,” said Jacobs, who insisted the week of the fight that he was not worried the judges would be influenced by the pro-Alvarez crowd of 20,203 at the T-Mobile Arena on Cinco de Mayo weekend.

Alvarez was already guaranteed $35 million as part of his reported $365 million deal with DAZN, the streaming platform that has contracts with several top fighters. He got the flat fee instead of the usual share of pay-per-view proceeds because the fight was offered on DAZN for the cost of a subscription.

Golovkin sat ringside for the fight, which set up a possible third bout with Alvarez, perhaps in September.

“I’m here in Vegas because I want that fight,” Golovkin said.