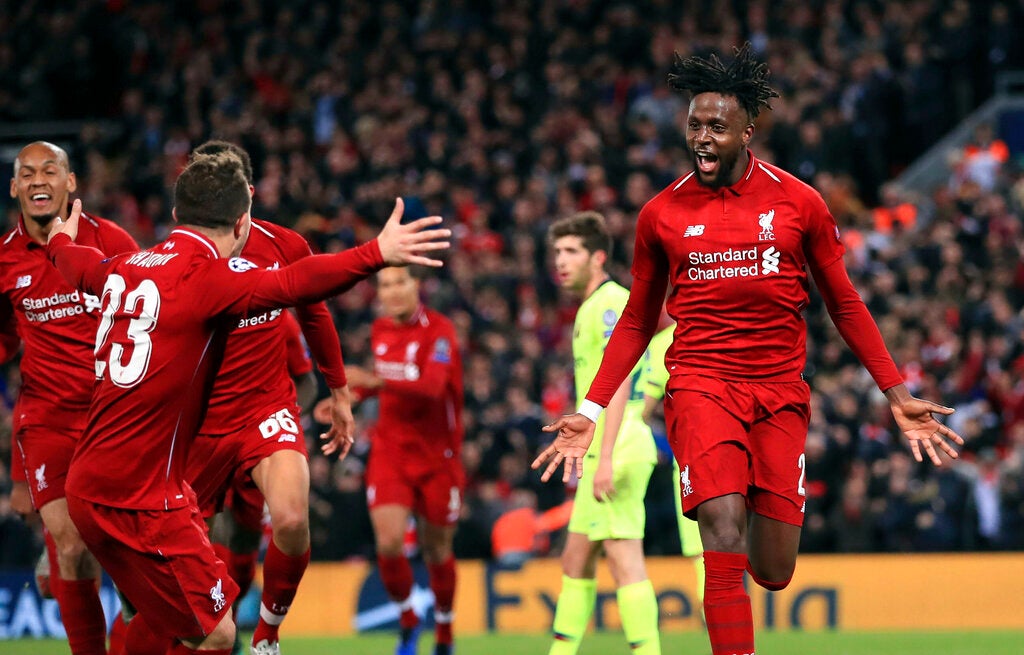 LIVERPOOL, England— Liverpool’s players had their hands on their heads, seemingly unable to comprehend their achievement. One of them, James Milner, was in tears. When he wasn’t punching the air, Liverpool manager Juergen Klopp stood in front of The Kop in full voice and just took it all in.

Just when Liverpool fans thought they had seen it all — the so-called “Miracle of Istanbul” in particular, but also those storied comebacks at Anfield against Saint-Etienne, Olympiakos and Borussia Dortmund down the years — along came another European night that just might top them all.

The Liverpool players faced a 3-0 deficit against Barcelona from the first leg of the Champions League semifinals. They faced the great Lionel Messi, perhaps in the best form of his life. They faced fatigue from a grueling Premier League title race with Manchester City and the absence of two of the team’s key forwards, Mohamed Salah and Roberto Firmino.

How to explain, then, a remarkable 4-0 win that sent Liverpool into a second straight Champions League final, 4-3 on aggregate?

“We know this club is a mix of atmosphere, emotion, desire and footballing quality,” Klopp said. “For me, this club has a big heart and tonight the heart was pounding like crazy. You could feel it all over the world.”

It took a goal of breathtaking quality — but also extraordinary cheek — to complete the greatest in a long line of famous comebacks by Liverpool, which is one win away from becoming European champion for a sixth time.

Euphoria had already engulfed Anfield when Liverpool, leading 3-0 and smothering Barcelona with its intensity, was awarded a corner in the 79th minute. Trent Alexander-Arnold, a 20-year-old right back, put the ball down in the quadrant and then turned around as if he was about to leave the kick to a teammate.

In an instant, he spun round again and whipped in a low cross that Barcelona’s players weren’t prepared for. Divock Origi was ready, though, and he swept home a finish from eight meters (yards) into the top corner for his second goal of the game.

Klopp was full of praise for the lucid thinking of Alexander-Arnold, the youngest player on the Liverpool team, and said he hadn’t even seen the corner being taken.

It was only the third time in the history of the competition that a team rallied from three goals down after the first leg of a semifinal and progressed to the final, after Panathinaikos in 1970-71 and Barcelona in 1985-86. No team had done it in the Champions League era.

“When you have a collapse of this nature,” Barcelona coach Ernesto Valverde said, “we will have a few horrible days ahead.”

For Barcelona, it was the second straight year that the team let a three-goal lead slip, having beaten Roma 4-1 at home in the quarterfinals in 2018 before losing the return leg 3-0 to go out.

As for Liverpool, given the opposition this display rivaled the comeback from three goals down against AC Milan in the 2005 Champions League final.

There was also the 3-1 win over Saint-Etienne in the 1977 European Cup and the 4-3 win from 2-0 down against Borussia Dortmund in the 2016 Europa League quarterfinals. The last-gasp 3-1 win over Olympiakos, sealed by Steven Gerrard’s late long-range goal, in the 2004-05 group stage also lingers long in the memory.

“The people from outside, they doubted us and thought we couldn’t do it,” said Georginio Wijnaldum, a halftime substitute who scored two of the goals. “But once again we showed that everything is possible.”

Klopp had delivered a stirring speech on the eve of the game, telling his players to “fail in a beautiful way” if they were to get eliminated.

They took that to heart.

Salah, Liverpool’s top scorer who missed the game as he followed protocols after a concussion, entered the stadium before kickoff wearing a T-shirt bearing the message: “Never Give Up.”

Then teammate Andrew Robertson set the tone on the field, pushing Messi’s head with two hands while the Barcelona forward was on the ground after an early challenge. Fabinho followed that up with a crunching tackle on Luis Suarez, who was jeered and goaded relentlessly by Liverpool fans at the ground he graced for 3½ years.

A goal was needed to really give Barcathe jitters and it arrived after seven minutes, with Origi tapping into an empty net after goalkeeper Marc-Andre ter Stegen parried a shot by Jordan Henderson.

Barcelona already appeared rattled, with Suarez living up to his role as the player opposition fans love to hate. In one incident, the striker flicked his boot back into the right knee of Robertson as they ran along together. Robertson needed treatment and was substituted at halftime, with his injury later confirmed to be a calf muscle problem.

Wijnaldum, who replaced Robertson, made an almost instant impact, making it 2-0 by sweeping home a low cross from Alexander-Arnold. Two minutes later, the Dutch midfielder made another run into the area and met a cross from Xherdan Shaqiri with a firm header into the corner past a flat-footed Ter Stegen.

The goals came in the 54th and 56th minutes — the times of Liverpool’s first two goals in that 2005 final in Istanbul.

Philippe Coutinho, another former Liverpool player, was substituted for Nelson Semedo after an ineffective display and Barca quickly improved, exerting more control. Liverpool’s players might also have wondered how to approach the game with the score tied on aggregate.

Then came the coup de grace after the cheeky play by Alexander-Arnold at a corner. Barcelona had no answer, with Messi — the star of the first leg with two goals — largely snuffed out.

Tottenham or Ajax await in the June 1 final in Madrid. Ajax leads 1-0 from the first leg.

Read Next
A lot more to offer
EDITORS' PICK
Villar Group gears up for AllValue Shopping Party on Dec. 3; around P 1-million promos and discounts up for grabs
A delightful blessing!
Legarda: Ending Violence Against Women, a cause for all
Gov’t eyeing COVID-19 vaccine booster for essential workers, indigents by Dec. 10
Omicron poses ‘very high’ global risk, countries must prepare–WHO
PH logs 665 new COVID-19 cases, lowest since July 2020
MOST READ
Quiboloy warns of ‘much worse than Omicron virus’ if his ‘persecution’ is not stopped
Bongbong Marcos’ conviction in tax case not a crime involving moral turpitude — lawyer
Omicron poses ‘very high’ global risk, countries must prepare–WHO
Marcoleta defends pol ads on ABS-CBN
Don't miss out on the latest news and information.