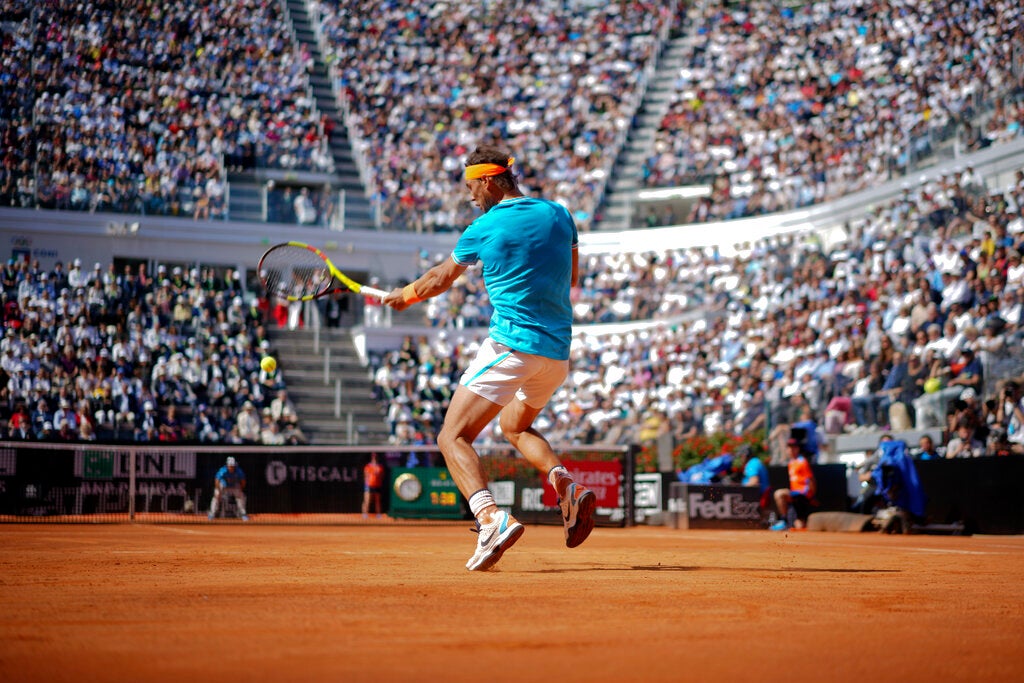 Rafael Nadal of Spain returns the ball to Fernando Verdasco of Spain during their quarterfinal match at the Italian Open tennis tournament, in Rome, Friday, May 17, 2019. (AP Photo/Andrew Medichini)

Roger Federer and Naomi Osaka both pulled out of the Italian Open on Friday before their quarter-final matches due to injuries just a week before the start of the French Open, as defending champion Rafael Nadal swept into the last four.

The eight-time champion came through 6-4, 6-0 against compatriot Fernando Verdasco to set up a rematch with Greek rising star Stefanos Tsitsipas for a place in the final.

Tsitsipas advanced after Federer — returning to clay after a two-year absence — retired with a right leg injury before their game.

“I am not 100 percent physically and after consultation with my team, it was determined that I not play,” said 37-year-old Federer.

The 32-year-old Nadal, seeded second, advanced to his fourth straight semi-final but has not managed to go further on clay this season, ahead of his bid for a 12th French Open title at Roland Garros, starting on May 26.

Tsitsipas beat Nadal in last week’s Madrid Open semi-finals before falling to Novak Djokovic, but lost to the Spaniard in the Australian Open semis earlier this year.

Reigning US and Australian Open champion Osaka had earlier said she could not compete because of a problem with her hand.

“I woke up this morning and I couldn’t really move my thumb,” the 21-year-old told a press conference.

“I tried to practice and grip my racket and I just felt this pain every time I tried to move my hand in different directions.”

The Japanese star was due to meet Madrid Open champion and sixth seed Kiki Bertens.

Bertens goes through to meet either Britain’s Johanna Konta or Czech Marketa Vondrousova.

“I haven’t seen the doctor yet. I’ve seen the physio,” she said.

Osaka said she could stay in Rome before going on to the French Open, but did not rule out competing in Roland Garros.

“I’m going to stay here for one more day and see how it is,” she said.

“I haven’t really talked to everyone so don’t really know the plan is yet. I’ve never had this problem before, it’s brand new.”

“I’m going to take it like how I went to Australia,” added Osaka, who also retired with a leg injury against Bertens in the WTA Finals last October before going on to win in Melbourne.

“Grand Slams to me are like a playground, I have a lot of fun there.”

Osaka won twice on Thursday after the previous day’s play was rained off, retaining the world number one spot ahead of the French Open.

Federer was playing in the Italian capital to prepare for his return to the French Open for the first time since 2015.

“I am disappointed that I will not be able to compete today,” said Federer, who also reached the quarter-finals in Madrid.

“Rome has always been one of my favorite cities to visit and I hope to be back next year.”

The 20-time Grand Slam champion had been on court for nearly four hours on Thursday, saving two match points to win through in three sets against Borna Coric after earlier easing to a straight sets win over Portgual’s Joao Sousa.

The former world number one had been a late addition to the Rome tournament as he sought clay-court practice ahead of his bid to add to his lone French Open title from 2009.

Schwartzman, 26, won 6-4, 6-2 in 87 minutes in the quarter-final for his first win in four meetings with former US Open finalist Nishikori.

The world number 24, a French Open quarter-finalist last year, has not dropped a set so far on the red clay of the Foro Italico and next faces either the top-ranked Djokovic or compatriot Juan Martin del Potro.

“It’s not the best result I wanted, but I’m getting better every tournament from Barcelona and looking forward to playing the French,” said Nishikori.