Monty Williams hoping to give Suns some needed stability 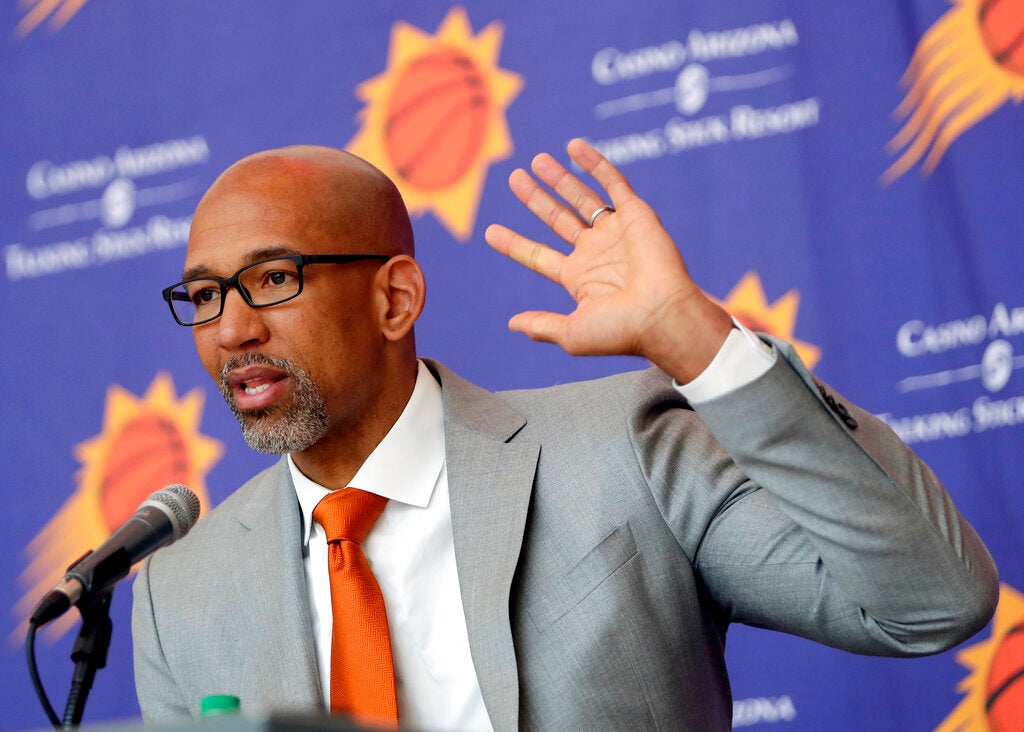 PHOENIX — The Phoenix Suns have gone through coaches like tear-away racing visors, the count up to five in five years.

The instability has hurt them on the court, the run of playoff-less appearances stretching to nine straight seasons with this year’s 19-63 finish.

“Continuity, having a staff here for a while and putting in a system that the players can rely upon, but ultimately it will come down to James, myself and the players pushing this thing forward,” Williams said during his introductory news conference Tuesday. “The players are going to have to embrace a level of work and commitment that it takes to be a champion.”

Williams was hired on May 3 to replace Igor Kokoskov, who was fired after one season in the desert.

Williams’s arrival in Phoenix was delayed while he finished out the playoffs as an assistant to Philadelphia coach Brett Brown. The 76ers were eliminated from the playoffs last week by Toronto on Kawhi Leonard’s hang-on-the-rim buzzer-beater in Game 7 of the Eastern Conference semifinals.

Williams’ name had been linked to numerous head-coaching jobs, including the Lakers, but he wound up in the Valley of the Sun after multiple discussions with Suns owner Robert Sarver.

“In my conversations with Mr. Sarver, I saw someone who didn’t duck the tough questions,” Williams said. “We both had tough questions for each other and in this day and age where people throw each other under the bus, make excuses, blame, I didn’t see that. I saw a man who really wants to bring success to this city and I mean that with all of my heart or I wouldn’t have come here.”

Williams had a previous stint as an NBA head coach, leading New Orleans from 2010-15. A year after he was fired, Williams’ wife, Ingrid, was killed in a car crash.

He didn’t know if he wanted to get back into coaching after her death, but was pushed by his kids to return to coaching the sport he loves.

“When everything happened to my family, my focus was just take care of my children,” said Williams, who has remarried. “That led me to believe I might not ever be able to coach again, and I was cool with that. But they weren’t. And to have your children want you to go back to doing what you love to do gave me even more confidence, more strength. Hopefully that translates and the players can pick up on that.”

The Suns have been known as a dysfunctional franchise, but were lauded for landing Williams, a well-respected, well-rounded coach.

In the Suns, Williams takes over a young team with two star-quality players at its core: Devin Booker and Deandre Ayton.

Booker has developed into one of the NBA’s best scorers, leading the Suns with 26.6 points per game. He had five 40-point games the final month of the season, including 50 and 59 in consecutive games.

Ayton was the No. 1 overall pick in last year’s NBA draft and didn’t disappoint, shooting 59% while averaging 16.3 points and 10.3 rebounds.

Phoenix should be able to add to its talent base with the sixth overall pick in this year’s draft.

“There’s so much room to grow,” Williams said. “I think we have a young team that’s learning how to win and they will and I have to do my job. I have to enhance the strengths but be honest about our weaknesses and get the players to consider a new way of doing some things. I think I’m here at the right time and I’m here with the right people.”