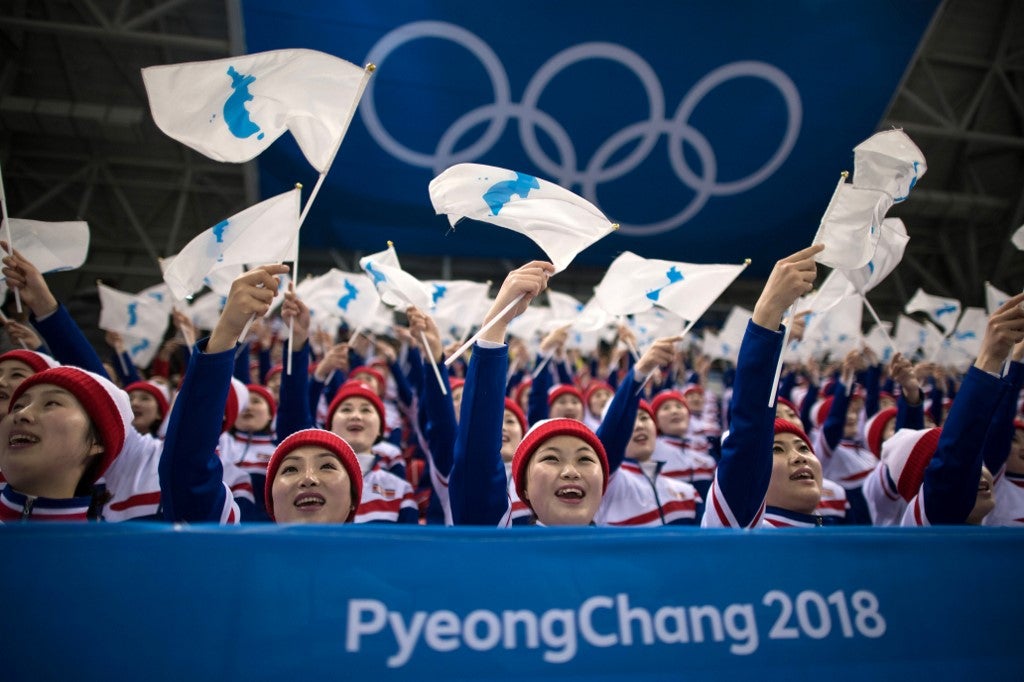 FILE – North Korean cheerleaders wave the Unified Korea flag as they attend the men’s preliminary round ice hockey match between South Korea and Czech Republic during the Pyeongchang 2018 Winter Olympic Games at the Gangneung Hockey Centre in Gangneung on February 15, 2018. (Photo by Ed JONES / AFP)

South Korea is dropping its plan for a joint women’s field hockey team with the North at the 2020 Tokyo Olympics, officials said Thursday, after Pyongyang failed to co-operate.

Sporting ties triggered a rapid diplomatic thaw on and around the peninsula last year, but are stagnating with the wider process over the North’s nuclear arsenal deadlocked.

The two Koreas formed their first-ever unified Olympic team — a joint women’s ice hockey squad — for the 2018 Winter Games in the South, where they proved a media sensation despite losing all five of their matches by a combined scoreline of 28-2.

The two Koreas then formed several joint teams for the 2018 Asian Games in Indonesia and in February agreed to send unified basketball, judo, field hockey and rowing squads to Tokyo.

But just weeks later a summit between North Korean leader Kim Jong Un and US President Donald Trump collapsed in disagreement over sanctions relief and what Pyongyang would be willing to give up in return.

That left North-South relations in limbo, with Pyongyang not responding to offers of talks or implementing previous agreements.

The International Olympic Committee has stipulated that, in team sports, any joint team Tokyo entries must have qualified as a single unit.

That means a joint women’s team needed to enter the IHF Women’s Hockey Series Finals in Ireland from June 8 to 16.

Thursday was the deadline for submitting squads and, with the North not responding, the South decided to enter alone.

“It will just be the South Korean team, not a unified team,” an official at the Korea Hockey Federation in Seoul told AFP.

South Korea’s sports minister Park Yang-woo held out hope of a change of heart by Pyongyang.

“We have repeatedly sent our request but there has been no response. We will wait until the very last minute,” he told reporters earlier this week.

“If there is progress in talks for joint teams later, we will resume discussions but we have to prioritise the opinions of the athletes,” he said.

Pyongyang and Seoul have announced plans for a joint bid to host the 2032 Summer Games, but officials in the South Korean capital say there has not been any discussion on the project with their northern counterparts.