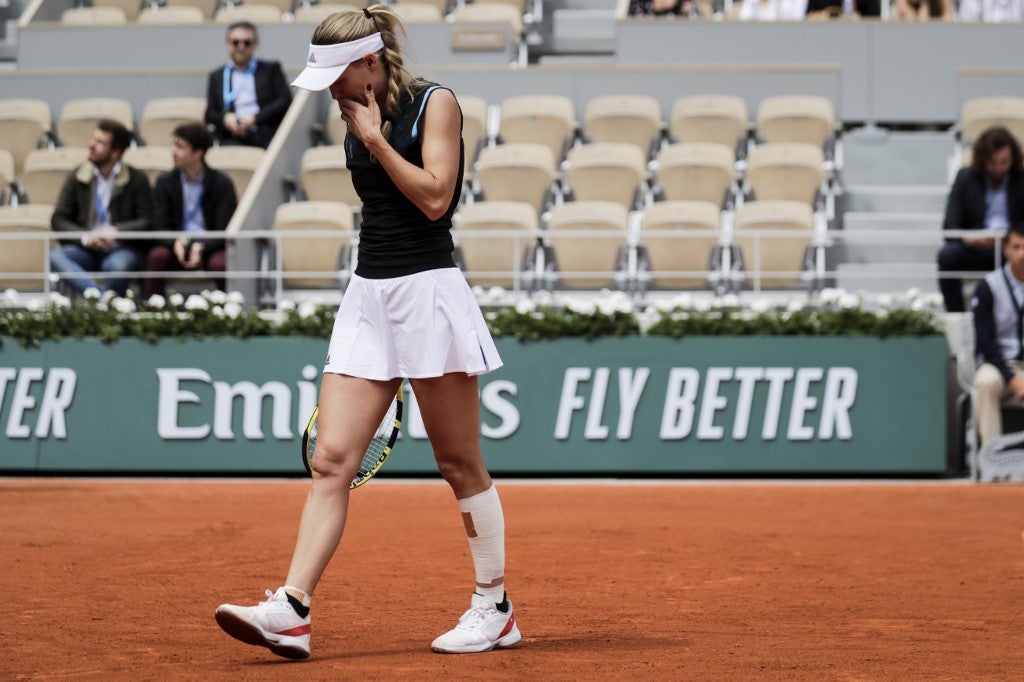 Denmark’s Caroline Wozniacki reacts as she plays against Russia’s Veronika Kudermetova during their women’s singles first round match on day two of The Roland Garros 2019 French Open tennis tournament in Paris on May 27, 2019. (Photo by Thomas SAMSON / AFP)

Former world number one Caroline Wozniacki was left “frustrated” after collapsing to a 0-6, 6-3, 6-3 loss to Russian world number 68 Veronika Kudermetova in the French Open first round on Monday and told her opponent she “got lucky”.

The Danish 13th seed had retired injured from her two previous matches in the lead-up to Roland Garros, but looked to have found form in a one-sided opening set.

Last year’s Australian Open champion lost her way in the second set, though, making 10 unforced errors, but said her opponent was fortunate to turn the match around.

“I think she got very lucky at the start of the second set and took advantage of the opportunities she got,” said Wozniacki.

“I ran out of steam in the end and made some unforced errors that I don’t usually do, so that was very frustrating.

“She had a few net chords and good shots on some of the important points at the start of the second set.

“It’s definitely frustrating. You want to win, you work hard and you want to see results.

“It hasn’t been a great year for me so far, so I’m going to work hard and try and turn it around.”

The 22-year-old Kudermetova cruised to victory in the decider on a sparsely-populated Court Philippe Chatrier to claim the biggest win of her career.

She will face either Kazakhstan’s Zarina Diyas or French wildcard Audrey Albie in the second round, having only made her main-draw debut at a Grand Slam event with a first-round Australian Open loss in January.

“I was a little bit nervous at the start of the match, but I took it game by game and tried to be more aggressive,” said the Russian.

For Wozniacki now, her focus will turn to the grass-court season, in which she has struggled in the past — never having reached the Wimbledon quarter-finals.

“I haven’t had the best lead-up to this tournament,” she said.

“I had a calf injury so haven’t really been able to play or practise for a couple of weeks.

“My calf now feels good so that’s a positive so I’m definitely going to go back and work hard and get ready for the grass season.”

It was the first time Wozniacki had lost in the opening round of a Grand Slam tournament since Wimbledon three years ago.

“I just have to try and stay positive, and obviously it’s not as easy to stay positive when things aren’t going your way,” she added.