Analysis: NBA Finals will decide a champion, and much more 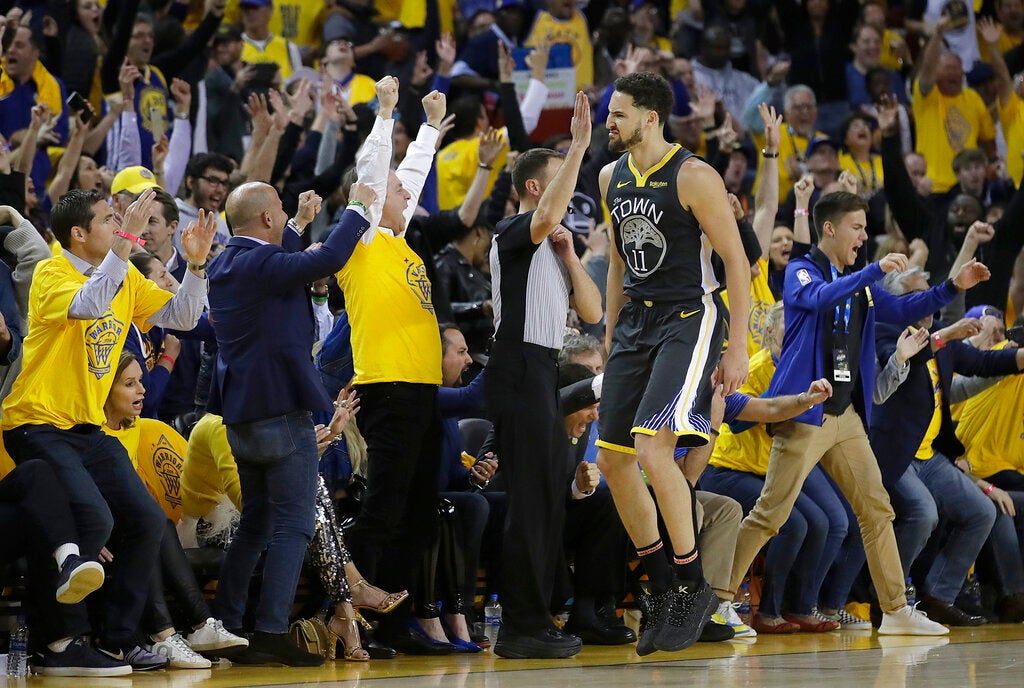 Golden State Warriors guard Klay Thompson (11) celebrates with fans after scoring against the Portland Trail Blazers during the second half of Game 2 of the NBA basketball playoffs Western Conference finals in Oakland, Calif., Thursday, May 16, 2019. (AP Photo/Jeff Chiu)

It all comes down to this.

It ALL comes down to this.

The next four, five, six or seven games of the NBA Finals between Golden State and Toronto will not only decide the 2019 championship, but how this series plays out is inevitably going to affect how free agency unfolds starting in a month or so.

It’ll affect Warriors star Kevin Durant and his annual stay-or-go decision. It’ll affect Raptors star Kawhi Leonard as he ponders his next move, or if he’ll be moving at all. Klay Thompson will be a free agent this summer. DeMarcus Cousins will be free this summer. Their thinking will inevitably be moved one way or another by this series; the decisions they’ll all make in the coming weeks will have a ripple effect on the rest of the NBA.

Durant made clear over the weekend that he’s tired of the incessant talk about his future.

“I know what I bring to the team,” Durant said, “but I also know that a lot of people on the outside don’t like to see us together.”

New York will be paying intense attention to everything that gets said, tweeted, Instagrammed and intimated. Brooklyn will be in the same boat. So will the Los Angeles Clippers, who think they’re on the cusp of building something really good, and the Los Angeles Lakers, who made the biggest signing of last summer by getting LeBron James and have done very little right since.

They will all be waiting to hear what Durant, Thompson, Leonard and Cousins decide.

And those are just the biggest fish — the whales, to use a term Miami President Pat Riley likes.

After that, there’s an additional 60 or so players who could be free agents this summer — some have opt-ins and might not be relocating — and who are coming off seasons when they averaged at least 10 points per game. Their teams next season will be affected on some level by who gets whom in the draft. How some teams pick in the draft will be influenced by what they’re hearing about free agency. And that hinges on this series.

So it’s not just a ripple effect.

The finals may create a tsunami.

“The latest I’ve heard from our basketball operations group is that, I believe, 40% of our players are going to be free agents this summer,” NBA Commissioner Adam Silver said at All-Star weekend in February. “So it’s two sides of the coin. Some people could say, ‘Oh my God, look at all that player movement.’ On the other hand, that player movement could be very positive for a lot of teams.”

If the Warriors win this series, as the oddsmakers in Las Vegas expect, it’ll be a third consecutive championship for Golden State — and some history. The Celtics, Lakers and Bulls are the only franchises to win three or more in a row. And out of that group, only the Celtics have won four in a row (eight, actually). Michael Jordan never did. Shaquille O’Neal and Kobe Bryant never did.

That would be the obvious recruiting pitch the Warriors would make to Durant and Thompson: “Come back and try to win No. 4. Come back and try to do something that very few players have done and something no one has done in a half-century.” That lure would undoubtedly be strong. But if they lose this series, it would seem much easier for either player to say it’s been a great run and it’s time to go play somewhere else.

If Durant stays, then the Knicks, Nets and Clippers would have to move on to Plan B for free agency.

Therefore, they probably should be rooting for the Raptors.

Durant is difficult to read because he uses social media to give cryptic hints that usually aren’t hints at all. Leonard is impossible to read. For all anyone knows, he already has decided to stay in Toronto or sign elsewhere. Or maybe he hasn’t even thought about the summer. Maybe he is as robotic as he tries to convey.

But the same theory applies: If Toronto wins this series, it’ll be harder for Leonard to leave. So for the teams that want him, they might want to root for the Warriors.

Let’s use the Knicks solely for example purposes. If they don’t get Durant or Leonard, then maybe Kyrie Irving crosses them off his list. Maybe that would mean Kemba Walker climbs up their charts. Maybe that means Jordan decides to offer Walker the super-max of $221 million or so to stay in Charlotte.

And the ripples go on and on.

They won’t be little waves gently rolling onto the shores, either.

This will be a summer of change and a summer of major spending in the NBA. This series is going to decide much more than who gets rings. This series will likely decide who plays where for many years to come.