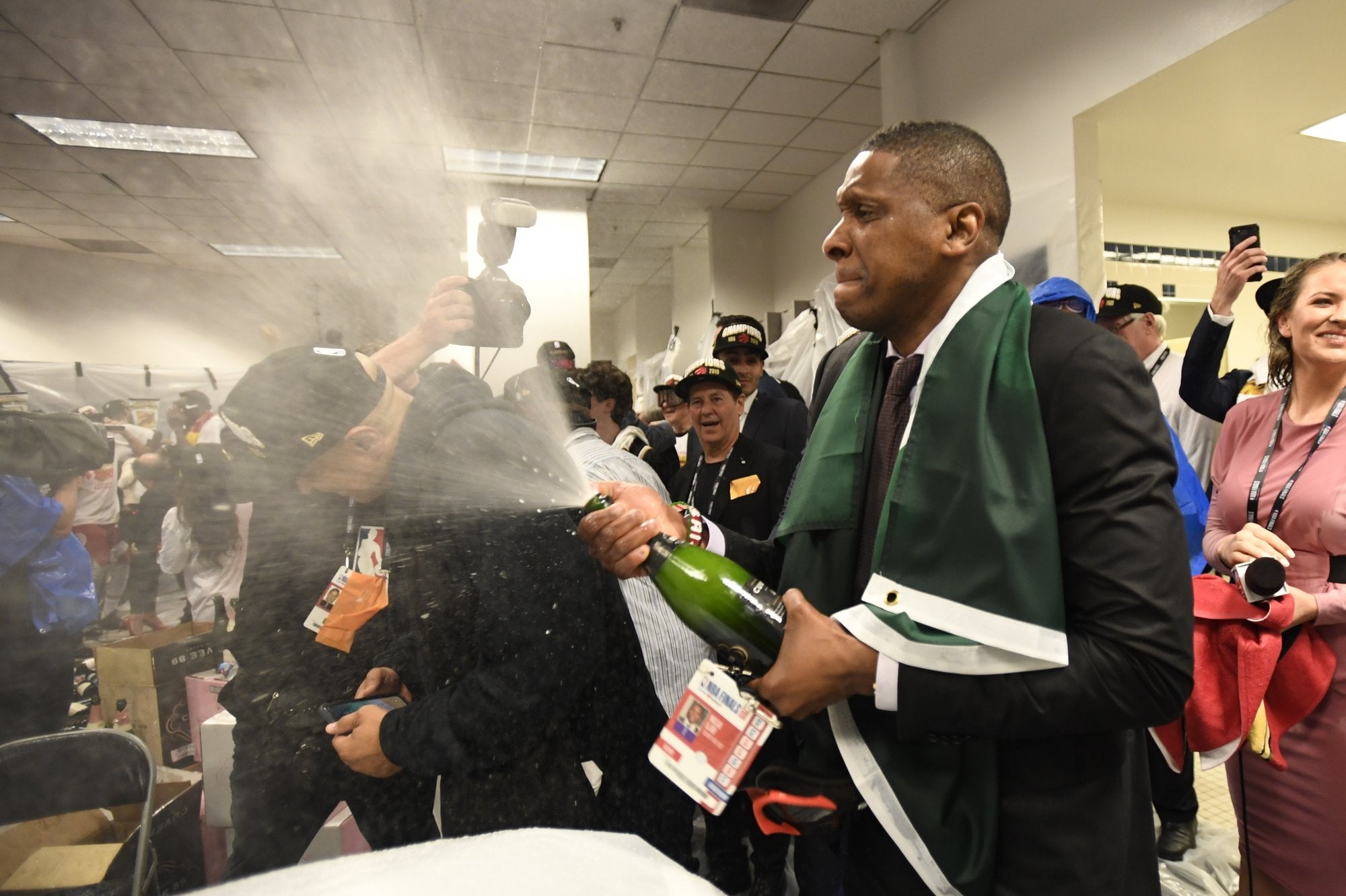 FILE – In this June 13, 2019, file photo, Toronto Raptors President Masai Ujiri celebrates after the team’s 114-110 win over the Golden State Warriors in Game 6 of basketball’s NBA Finals in Oakland, Calif. Authorities say they are investigating whether Toronto Raptors president Masai Ujiri pushed and hit a sheriff’s deputy in the face as he tried to get on the court after his team won the NBA title in Oakland. (Frank Gunn/The Canadian Press via AP, File)

SAN FRANCISCO — A California police agency will pursue a misdemeanor battery charge against Toronto Raptors President Masai Ujiri after the executive was accused of shoving and hitting a sheriff’s deputy in the face and shouting obscenities as he tried to join his team on the court to celebrate their NBA championship.

After the game Thursday in Oakland against the Golden State Warriors, Ujiri tried to walk past the deputy who was checking court-access credentials, Alameda County sheriff’s spokesman Sgt. Ray Kelly said.

When the deputy stopped him, Ujiri shoved him back several feet, Kelly said.

“That’s when our deputy goes hands-on and moves Mr. Ujiri back from the court. Mr. Ujiri made a second, more significant shove and during that shove his arm struck our deputy in the side of the head,” Kelly said.

Ujiri was also accused of shouting obscenities at the deputy.

Several bystanders intervened and Ujiri got onto the court without displaying any credentials, Kelly said.

The deputy complained of pain in his jaw and was taken to a hospital for evaluation and later released.

“We had the opportunity to make an arrest and we chose not to,” Kelly said. “We decided it would be in everyone’s best interest to slow things down and do an investigation.”

Kelly said deputies took witness statements and were reviewing footage from body cameras worn by the deputy along with footage from the arena surveillance system and cellphones.

Warriors fan Greg Wiener said he was standing next to the deputy when the encounter occurred and did not see Ujiri strike him in the face.

“The thing about the cops saying the policeman asked for his credentials, that didn’t happen. There was no conversation at all,” Wiener said.

“This part about striking him in the face, yeah that didn’t happen,” he added.

Wiener said the encounter began when the deputy put his hand on Ujiri’s chest and pushed him. Ujiri shoved him back before bystanders intervened, Wiener said, adding that he has not been interviewed by authorities.

“This looks like somebody trying to embellish what happened to protect what they did, what the policeman did,” he said.

The Raptors said the team is also looking into the altercation and cooperating with authorities.

“We look forward to resolving the situation,” the team said.

“We are in contact with the Raptors and local authorities and in the process of gathering more information,” Bass said.

ESPN reported that Ujiri had watched the end of the game on television with other team officials outside the Raptors’ locker room. He then went down a tunnel to join the on-court celebration.

He said his office will recommend a charge of misdemeanor battery against an officer even though he understood that Ujiri had a tremendous amount of emotion while trying to meet his team on the court.

The results of the investigation will likely be forwarded next week to the Alameda County district attorney’s office. A spokeswoman for the agency did not immediately respond to a request for comment.

“It will be up to the DA to file charges,” Kelly said.

A video of the altercation obtained by NBC Bay Area shows Ujiri and a deputy being held back courtside by several bystanders. It doesn’t show a scuffle.

The video appeared to show Ujiri holding some type of credential in his right hand while standing by the court.

“Anybody who knows anything about him would say that some notion that he would be shoving people around in Oakland or elsewhere in the world is not credible,” Tory said.

Last week, the NBA banned Golden State Warriors investor Mark Stevens from games for a year and fined him $500,000 after he was seen on camera apparently shoving Toronto star Kyle Lowry during Game 3 of the playoffs.

Lowry had dived into a row of courtside seats to try to save a loose ball. Stevens, wearing an NBA-issued credential, was seated about two spots away from where Lowry landed and shoved Lowry in the upper body.

Lowry said Stevens repeated a vulgar phrase to him about four times during the brief incident.

The Warriors said later in a statement that the team and Stevens “offer our sincere apology to Kyle Lowry and the Toronto Raptors organization for this unfortunate misconduct.”