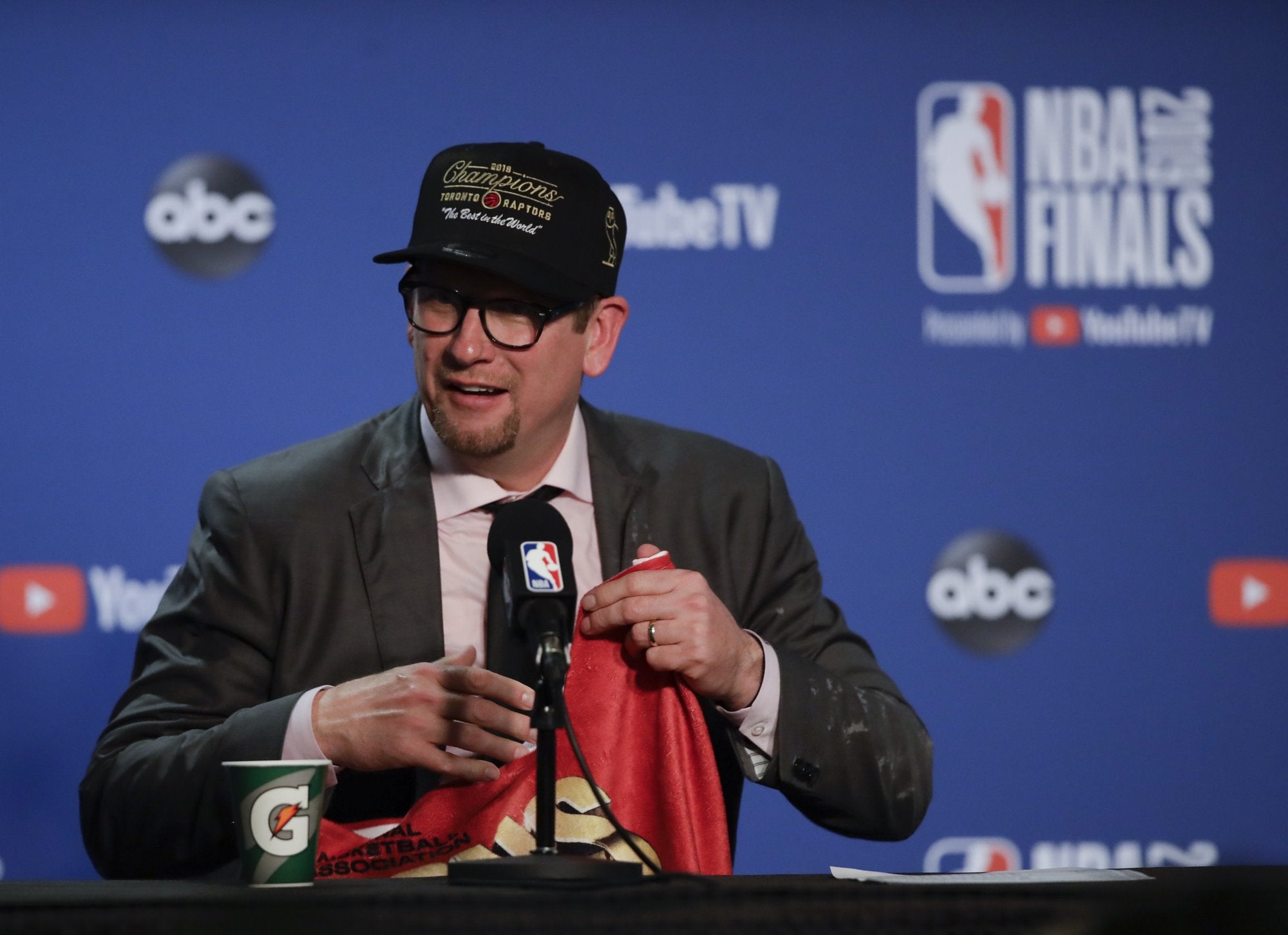 OAKLAND, Calif. — Whenever Toronto coach Nick Nurse needed inspiration this season, he merely needed to look at his office wall.

Hanging there is a big photo, a finish-line shot of the 2015 Travers Stakes at historic Saratoga Race Course. There are two horses in the frame; one is Triple Crown winner and overwhelming favorite American Pharoah, the other is Keen Ice — who wasn’t getting much attention from bettors and had never won on such a big stage.

Keen Ice ran a perfect race that day, and knocked off the champion.

Yes, and there’s symmetry now. His Raptors ran a perfect race — and knocked off the team that had won the 2017 and 2018 NBA titles.

Nurse, a 51-year-old basketball journeyman who has been a coach for 13 different teams in four countries over the last 30 years, is now the coach of the best team in the world. Unknown no more and someone who never will be anonymous again, Nurse guided the Raptors to their first NBA championship in a six-game defeat of the Golden State Warriors.

“I think you can’t do very good work if you don’t love what you’re doing,” Nurse said after the Raptors dethroned the Warriors on Thursday night. “I just, I don’t know, I never really got discouraged. I didn’t really care at the level I was coaching at, I was just trying to learn and get better. That’s it.”

Clearly, he learned. And he got better.

Toronto defeated Orlando, Philadelphia, Milwaukee and Golden State in these playoffs. That means Nurse, 0-0 as an NBA coach before this season, got his team past ones coached by Steve Clifford, Brett Brown, Mike Budenholzer and Steve Kerr. That foursome is about the toughest draw a first-year coach in the league could get in his maiden postseason voyage.

“He’s one of the hardest-working coaches I’ve seen,” Raptors assistant Jamaal Magloire said during Toronto’s victory celebration after the title-clinching win. “When it comes to this team’s success, he deserves every bit of it.”

Nurse played at Northern Iowa, started his coaching career there as an assistant and wound up becoming a head coach at Grand View University when he was just 23. He coached in Belgium and Britain. He won a pair of British Basketball League titles as a coach, in Birmingham in 1996 and London in 2000, then got a couple titles in what is now called the G League.

The second G League crown got him noticed. He was at Rio Grande Valley, guided them to a title in 2013 and that’s when the Raptors called and wanted to talk to him about offense. They ended up hiring him as an assistant.

Nurse is quirky, in a way that shows he’s secure doing his own thing.

He often arrived for pregame media sessions wearing a black Nike cap bearing his initials. He carries his guitar on road trips. He will be remembered for throwing a box-and-one defense at Warriors guard Stephen Curry during the NBA Finals, a scheme that probably had never been previously used by anyone in the title series.

He has paid his dues.

The G League, the BBL, the United States Basketball League, the Belgian League, NCAA Division I basketball, NAIA basketball, and now the NBA. Nurse has done the laundry. He’s done the driving. He did some of those jobs for almost no money at all, maybe a couple hundred dollars or so a week.

And now he’s the ninth coach to win a title in his first NBA season. Coaching nomads everywhere have a new hero.

His world is much different now.

For someone who has never chased attention, it’ll be unavoidable when the Raptors defend their NBA title next season.

“Nick has been unbelievable,” Raptors guard Fred VanVleet said. “He’s kind of been the captain of the ship, and he’s weathered the storms, and he’s kept us even-keeled, and he’s made some unusual adjustments and experimented with things. And some things worked and some things didn’t, but he was trying. He tried everything and you’ve got to give that guy a lot of credit in his first year to win a NBA championship.”