Gambles by Masai Ujiri pay off with NBA crown for Raptors 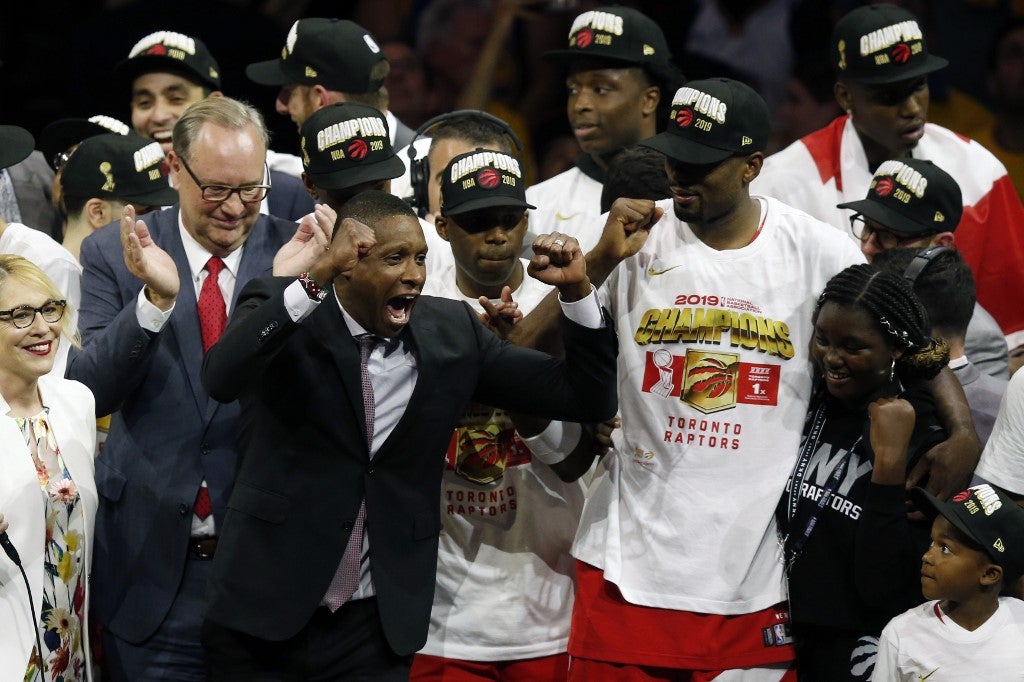 From the ashes of an epic playoff failure last year, the Toronto Raptors made a pair of risky moves and wound up winning the first NBA title in their 24-season history.

The Raptors defeated defending champion Golden State 114-110 Thursday to capture the best-of-seven NBA Finals four games to two, becoming the first team from outside the United States to win the title.

But it was an unlikely journey that began shortly after the Raptors won the Eastern Conference regular-season crown but were swept out by Cleveland in the second round of the playoffs.

That led Raptors president Masai Ujiri to fire Dwane Casey, who would be named NBA Coach of the Year for the campaign. Casey was quickly signed by division rival Detroit.

Nick Nurse, an assistant coach with the club since 2013, was promoted to head coach and proved a perfect fit.

Ujiri, who is from Nigeria, saw Nurse as the man to guide an intense squad.

“We’re a hardworking team and I think Nick has that persona and that ethic that really translates to everybody and the whole organization as a whole,” Ujiri said.

Then Ujiri traded DeMar DeRozan, the face of the franchise for a decade, to San Antonio to bring Kawhi Leonard to the Raptors.

It was a risk. Leonard had been the 2014 NBA Finals Most Valuable Player for the champion Spurs and was NBA Defensive Player of the Year in 2015 and 2016 but missed almost all of the 2017-18 campaign with a right quad injury.

But Leonard clicked with the Raptors and produced career highs of 26.6 points and 7.3 rebounds a game as Toronto achieved the second-best record in the NBA at 58-24.

“It’s surreal,” Ujiri said. “But I think when you put the team together and we all dream of a championship, the change was hard at the time, but we knew the kind of player we were getting and if we overcame and dealt with all the issues, we felt that could come together.

“We were all positive about this kind of moment and all dreamt about it.”

The Raptors added Spanish center Marc Gasol from Memphis at the trade deadline, adding a tough defender and calm influence to a young, strong, defensive-minded squad powered by Leonard.

In the playoffs, the Raptors dispatched Orlando in round one and overcame Philadelphia on a dramatic seventh-game basket at the buzzer by Leonard that bounced four times on the rim before dropping through for the winning points.

If that wasn’t enough of a thriller, the Raptors fell behind NBA season wins leader Milwaukee 2-0 in the Eastern Conference final before rallying to win four straight games and advance to their first final.

“We hit that dramatic buzzer beater to advance,” Nurse said. “We got on the plane the next day and had to play less than 48 hours after that. We came out and played unbelievably tough. The ball didn’t bounce our way that night. We didn’t get any breaks. But I thought we outplayed them.

“When we went down 0-2 our guys were like, ‘OK, let’s just get home and we’ll get this thing turned around.’ So that’s probably a moment of where I thought the team had something inside them to keep on going.”

Challenged to dethrone a dynasty to win the title, the Raptors used a stellar effort by Cameroon standout Pascal Siakam in game one, two impressive Leonard road performances to take two in Golden State, and clutch late 3-pointers by Fred VanVleet to edge the Warriors in the final game.