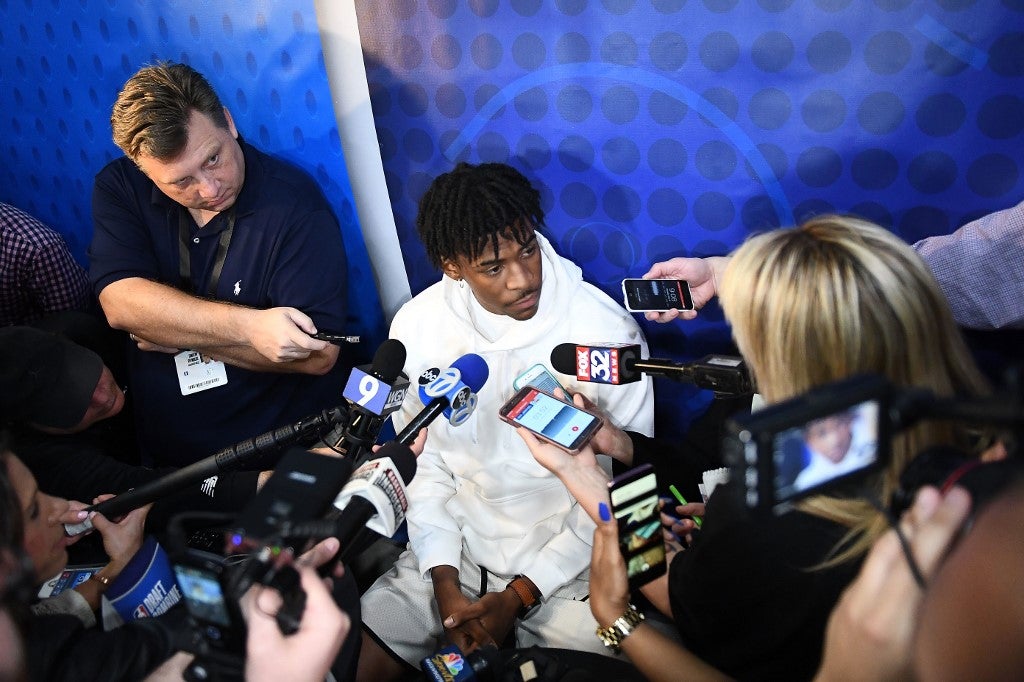 CHICAGO, ILLINOIS – MAY 16: Ja Morant speaks with the media during Day One of the NBA Draft Combine at Quest MultiSport Complex on May 16, 2019 in Chicago, Illinois. NOTE TO USER: User expressly acknowledges and agrees that, by downloading and or using this photograph, User is consenting to the terms and conditions of the Getty Images License Agreement. Stacy Revere/Getty Images/AFP

Ja Morant, Darius Garland and Coby White make up a clear top tier of point guards in next week’s NBA draft, though one has barely played in the past year.

Morant was an NCAA Tournament star for Murray State, while White blossomed into a one-and-done talent driving North Carolina’s fast-paced attack. But there’s more uncertainty with Garland after he appeared in just five games at Vanderbilt due to injury.

Morant could go No. 2 overall to Memphis, while Garland and White are top-10 prospects. Beyond them, there could be a long wait to hear another point guard called Thursday night.

Here’s a look at the top prospects:

The 6-foot-3 sophomore offers athleticism, offensive punch and playmaking ability capable of providing an immediate jolt to any team.

STRENGTHS: Morant made a rapid rise to dominance with scoring (seventh nationally at 24.5 points) and in setting up teammates (national-best 10.0 assists) as a fearless competitor. His skills were on full display in matchups against power-conference teams Alabama (38 points) and eventual Final Four team Auburn (25 points, eight rebounds and seven assists before posting the NCAA Tournament’s first triple-double since 2012 (17 points, 11 rebounds, 16 assists) in a rout of Marquette. It’s also worth noting that Morant improved his shooting percentages across the board, notably by going from 29.2% on 3-pointers as a freshman to 36.3% last year.

CONCERNS: Even with the strong power-conference performances, he spent most of the year dominating mid-major opponents. Morant has shown potential to be a solid defender, though that sometimes took a backseat amid his heavy offensive load and he’ll need to improve. Additionally, he must take better care of the ball (10 games with at least seven turnovers, including two with 10).

The 6-2 freshman displayed his potential before going down with a knee injury 2 minutes into his fifth college game.

STRENGTHS: He arrived on the college scene as a McDonald’s All-American with an offensive game blessed with deep shooting range. He averaged 19.8 points, 4.8 rebounds and 3.3 assists while shooting nearly 53% from the field and 48% from behind the arc (11 of 23) in those four full games. That included 33 points on 12-for-18 shooting with five 3-pointers against Liberty.

CONCERNS: The biggest question is how well he regroups from surgery to repair the meniscus injury in his left knee suffered against Kent State on Nov. 23. Even with a full physical recovery, Garland has lost a year’s worth of development and growth at the college level. That could set up for a slower NBA transition, both in knocking off rust and gaining full-speed trust in his repaired knee.

The 6-5 guard has the ability to score from anywhere — and in bunches.

STRENGTHS: White was an instate recruit who set a North Carolina prep career scoring record, then steadily developed as the Tar Heels’ floor leader to make himself a top-tier NBA prospect. He averaged 16.1 points with the ability to push in transition, score in traffic or separate for a shot against tight defense. He set a UNC freshman record for made 3s while also becoming the first freshman in program history to crack 30 points three times in a season — proof that he can get rolling in a hurry and illustrating why coach Roy Williams called him “the best scoring point guard that I’ve ever coached.”

CONCERNS: White can hit from anywhere but could be a bit more efficient, shooting just 42% from the floor and 35% from behind the arc. He will need to make more strides defensively and build on improvements made over the course of his freshman season.

— JORDAN BONE: The 6-3 junior from Tennessee is a second-round prospect who nearly doubled his scoring average last year (13.5 points, up from 7.3) and had a program-record 2.91 assist-to-turnover ratio.

— CARSEN EDWARDS: Size is a concern (6-0) but Edwards sure can score. The likely second-rounder averaged 24.3 points at Purdue and was dominant in the NCAA Tournament by going for 42 points in a rout of reigning national champion Villanova and then 42 more in an overtime loss to eventual champion Virginia in a regional final.

— AMIR HINTON: The 6-5 junior could be an intriguing second-round flier after averaging a Division II-best 29.4 points at Shaw.

— TY JEROME: The 6-5 junior is a tough-nosed competitor for a Virginia team that claimed its first NCAA title. He could go late in the first round with his ability to play on or off the ball, defend and hit from outside.

— SHAMORIE PONDS: The 6-1 junior from St. John’s could go in the second round with his scoring ability (19.5-point career average).