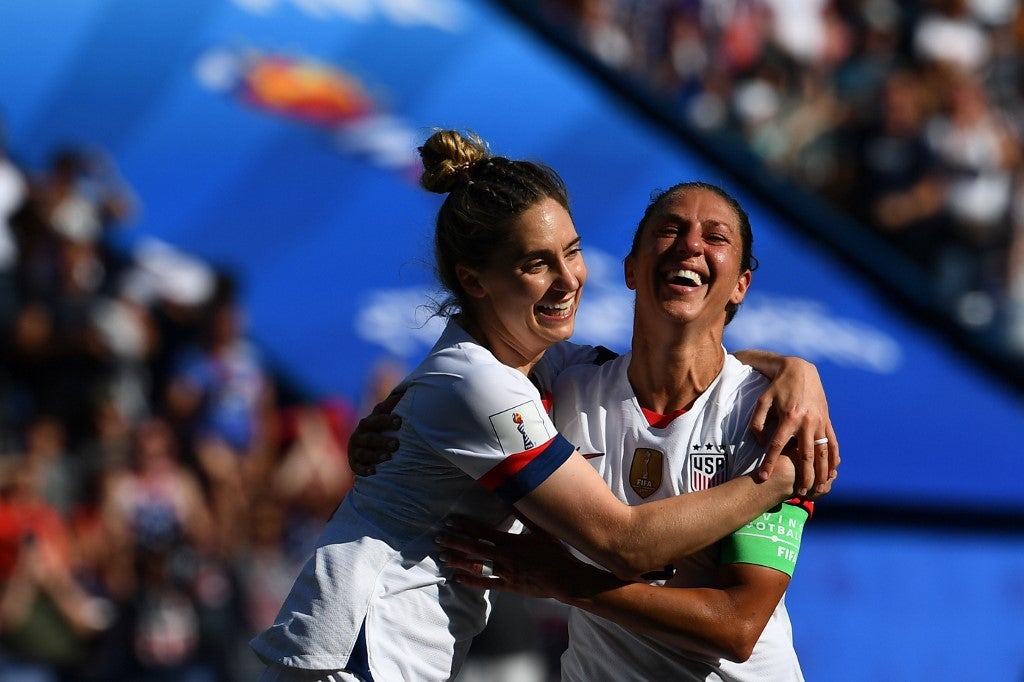 PARIS — Carli Lloyd wasn’t thrilled to open the Women’s World Cup on the bench for the United States. She accepted the role, but made no secret she wanted to start.

When the call came Sunday, Lloyd made it count with a pair of goals to lead the defending champions to a 3-0 victory over Chile. The win pushed the United States into the round of 16.

Lloyd was the hero of the World Cup in Canada four years ago when she scored three goals in the final against Japan that gave the Americans their third World Cup title. But she was on the bench when the U.S. opened the tournament, even though she scored later as a substitute in the 13-0 victory over Thailand.

“I know that my ability is there, I know this is my best version of me. I’ve just got to go out there and prove it,” she said. “Whether that’s coming off the bench and making an impact, whether that’s starting and getting the opportunity, which I’m grateful for, I’m just trying to make the most of it. I want to win.”

Lloyd became the first player to score in six straight World Cup matches with her goal in the 11th minute.

She added another on a header off a corner in the 35th for her 10th career World Cup goal, which moved her into third on the U.S. list behind Abby Wambach (14) and Michelle Akers (12). At 36, she became the oldest player to have a multi-goal game in the tournament.

She nearly got another hat trick — which would have made her the first player with two in the World Cup — but her penalty kick in the 81st minute went wide left.

The score could have been worse for Chile without unshakable goalkeeper Christiane Endler, who finished with six saves and fended off a flurry of U.S. shots in the second half.

Endler was named player of the match.

“I love the balls coming towards me and being able to showcase my skills,” she said through a translator. “Obviously it’s difficult to maintain concentration. I think in the first half it was difficult for me to get into the game. I think the second half went better for me and in general for the team.”

The victory over Chile was more subdued than the U.S. team’s record-breaking rout of Thailand. The Americans celebrated every goal even after the win was well in hand, and the display offended many who thought the champions should have shown more class. The controversy clouded the run-up to the match against Chile.

Several of the American players reached out to their Thai counterparts following the match. Lloyd exchanged encouraging words and tweets with goalkeeper Sukanya Chor Charoenying, and FIFA posted an interview with Thailand’s coach thanking the U.S. players for being professional and playing well.

After such a rout, Jill Ellis made sweeping changes to the starting lineup against Chile, including a new front line with Lloyd, Christen Press and Mallory Pugh. Alex Morgan was moved to the bench along with Megan Rapinoe and Tobin Heath.

Becky Sauerbrunn, who sat out the match against Thailand because of a minor quad injury, returned and anchored a backline that included 20-year-old Tierna Davidson, who was making her World Cup debut. Davidson is the youngest player to start for the United States in a World Cup since Tiffany Roberts against Norway in 1995.

Chile lost its opener to Sweden 2-0, but Endler was solid in that game, too, keeping the Swedes out of the goal until 83rd minute. The second goal got past the 6-footer in stoppage time.

Julie Ertz scored in the 26th minute with a header off a corner kick from Davidson that Endler got her hands on but couldn’t stop. It was Ertz’s first World Cup goal and came with her husband Zach Ertz, a tight end for the Philadelphia Eagles, looking on.

Endler denied Lloyd another chance at the hat trick when she tipped the U.S. captain’s shot over the net in the 72nd minute.

Sweden also advanced out of Group F with a victory 5-1 victory over Thailand earlier Sunday in Nice. Japan, playing in Group D with England, also went through to the knockout stage because both the United States and Sweden won.

Former Vice President Joe Biden was among the U.S. team’s well-wishers before the sold-out game at Parc des Princes stadium. Biden, who is seeking the Democratic nomination for president in 2020, referenced the team’s lawsuit against U.S. Soccer alleging gender discrimination and seeking equitable pay.

“As we cheer them on in the World Cup, we must support their fight off the field for equal pay. In 2019, it’s past time we close the pay gap and ensure women get paid as much as men,” Biden tweeted.

But for now, the players are concentrating on France and bringing home a fourth World Cup championship.

The United States plays Sweden on Thursday to wrap up the group stage. It is the first meeting between the two teams since Sweden ousted the Americans from the quarterfinals at the 2016 Olympics.

Chile wraps up the group with a match against Thailand on Thursday.