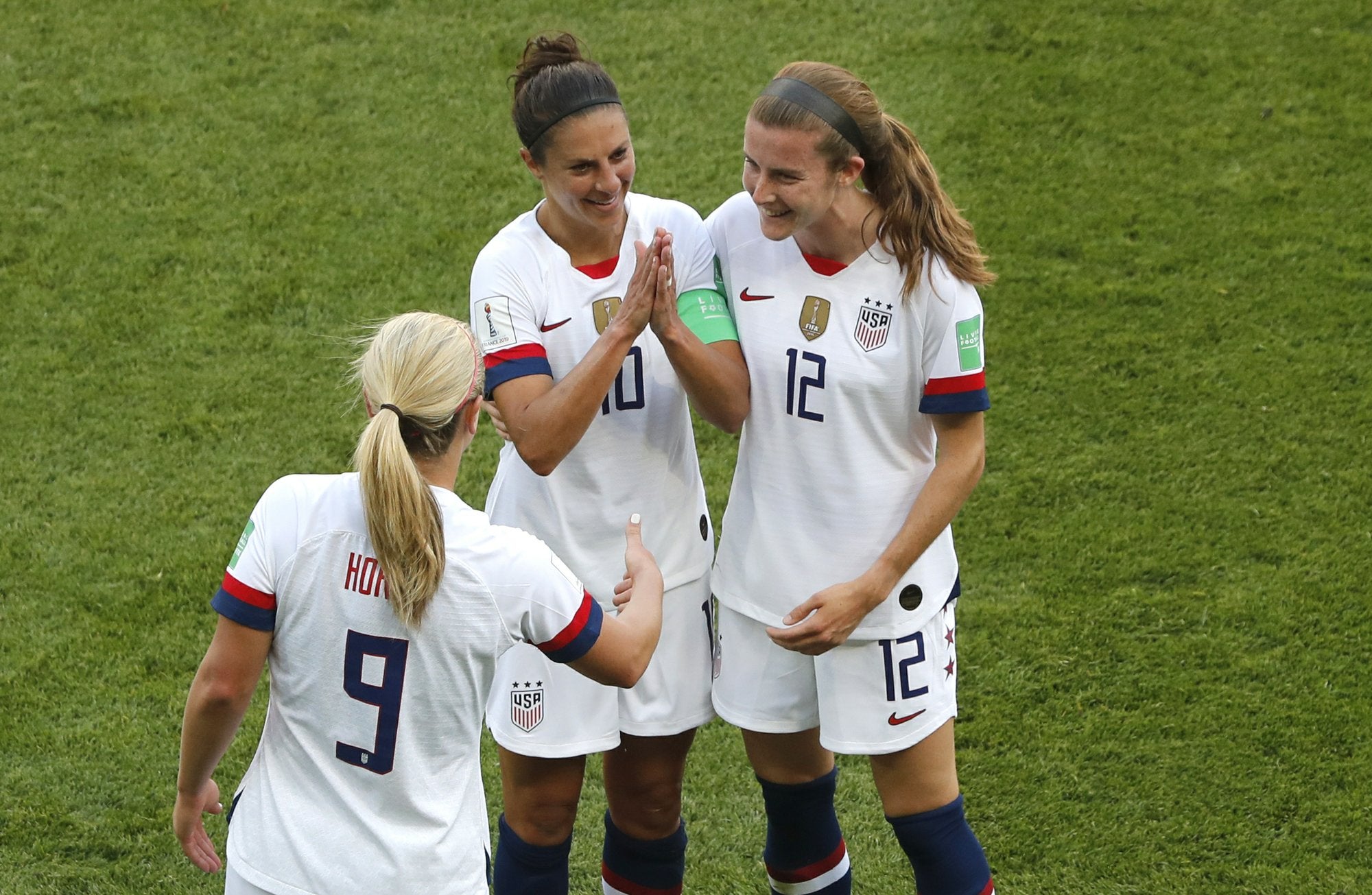 PARIS — Carli Lloyd had just scored on an 18-yard volley to put the United States ahead 11 minutes in against Chile. After leaping, pumping a fist and hugging teammate Lindsey Horan, she raised both hands chin high and made four tiny pitter-patter claps , the type seen more frequently at Pebble Beach than Parc des Princes.

A message? You bet.

Easy wins and lots of goals are par for the course when it comes to the U.S. women’s soccer team.

“I can’t take credit for it. I’m not sure if Lindsey is taking credit for it,” Lloyd said after a 3-0 victory Sunday night advanced the U.S. to the round of 16. “She had told me if we score, that’s what we’re going to do so I just went along with it after I did my little celebration But it was fun. I think it made a statement on the sideline there. It was cool.”

A record-setting 13-0 rout of Thailand that opened the tournament for the Americans sparked a debate back home. Celebration had not been discussed this much since Kool & the Gang. Some cried poor sportsmanship. Others argued players shouldn’t be asked to let up on soccer’s biggest stage.

All the harrumphing was heard across the Atlantic.

“I guess we could have just passed it around the back for a million times, but that’s boring. That’s disrespectful to everyone: fans, ourselves” said 33-year-old Megan Rapinoe, the pink-haired veteran famous for running to a corner flag and screaming “Born in the USA” into a television microphone after goal against Colombia in the 2011 World Cup.

“The only thing you ask of an athlete really is to put it all out there and do the best you can. It’s not in our DNA ever.”

“I’m guessing it was a shout-out to her husband,” Ellis said.

“We decided to do something different today,” Horan said with an impish smile. “Handshakes were part of it. Golf clap was part of it.”

Only the standout play of goalkeeper Christiane Endler lowered the Americans’ offensive output from Wonder Woman levels to the mere mundane. The U.S. peppered Chile with 26 shots to one for the South Americans, raising the U.S. margin to 65-3 over two matches that seemed more training than tests.

Alyssa Naeher, the Americans’ new World Cup goalkeeper, was noticeable only when an unmarked Carla Guerrero redirected Claudia Soto’s free kick past her midway through the first half. Guerrero was called offside.

More Americans were in the tournament-high crowd of 45,594 that filled Parc des Princes than walked around Sunday in Paris, Kentucky, or Texas. Quite different from the stands 21 years and one day earlier, when Germany beat the U.S. men 2-0 on the very same field in the Americans’ 1998 World Cup opener on goals by Andreas Möller and Jürgen Klinsmann.

Fans clad in red, white and blue jammed the Metro hours before kickoff, streaming on the No. 9 line at Trocadero, Republique and Richelieu-Drouot and emerging on at Porte de Saint-Cloud on the sunny afternoon.

“We’re in France, and yet we felt like we had a home game,” said Lloyd, at 36-year-old the oldest woman with a multi-goal World Cup match.

Despite their second easy win, the Americans maintained there was no reason to chill: Thailand is ranked 34th in the world and Chile is 39th. The Americans need a win or draw against No. 9 Sweden on Thursday in order to win the group. A victory likely means a second-round matchup against No. 13 Spain or No. 16 China, which would put the U.S. on track for a quarterfinal matchup against fourth-ranked France in Paris.

Ellis would not speculate whether her team would be better off finishing second and winding up in the other half of the bracket.

“There’s a lot of grass to navigate between now and potential matchups,” she said. “This game is a crazy game, and you have to bring it every single match.”

No team has won consecutive Women’s World Cups since the event began in 1991, a reason for sangfroid.

“We’re climbing up a mountain now,” Lloyd said, “and it’s only going to get harder.”