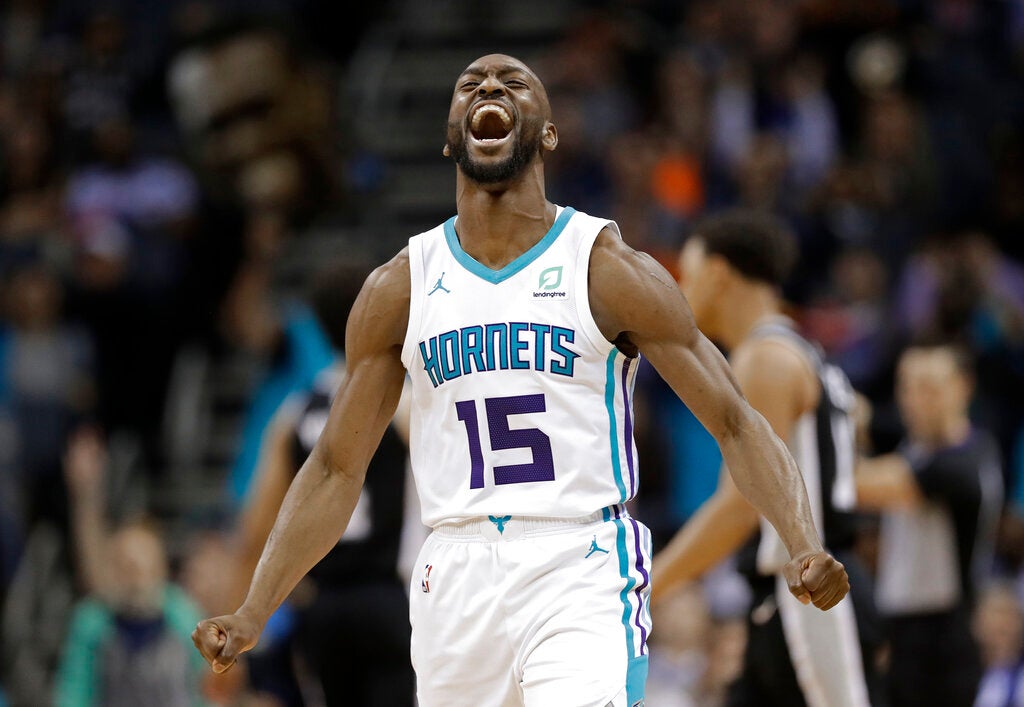 File-This March 26, 2019, file photo shows Charlotte Hornets’ Kemba Walker (15) reacting after making a basket against the San Antonio Spurs during the second half of an NBA basketball game in Charlotte, N.C. A person with knowledge of the situation says Kemba Walker has told the Charlotte Hornets of his intention to sign with the Boston Celtics once the NBA’s offseason moratorium ends July 6. Walker is planning to meet with the Celtics on Sunday, June 30, 2019, to discuss and likely finalize a four-year, $141 million deal, according to the person who spoke to The Associated Press on condition of anonymity because neither Walker nor the Hornets publicly revealed any details. (AP Photo/Chuck Burton, File)

The last time Kemba Walker was playing for a team in New England, he delivered a championship. Boston fans can only hope that repeats itself.

A person with knowledge of the situation said Saturday that Walker has told the Charlotte Hornets of his intention to sign with the Boston Celtics once the NBA’s offseason moratorium on player movement ends July 6. The person spoke to The Associated Press on condition of anonymity because neither Walker nor the Hornets publicly revealed any details.

The Charlotte Observer first reported that Walker had informed the Hornets of his decision.

Walker, who led UConn to an NCAA title eight years ago, can meet with the Celtics on Sunday after 6 p.m., and when he does he’ll likely agree on a $141 million, four-year deal — the most that Boston can offer. Charlotte could have offered Walker the so-called supermax deal of $221 million over five years.

Earlier this month, Walker said he would be willing to take less than the supermax figure to help Charlotte build a roster and said his “first priority” in free agency would be the Hornets. But amid reports that said the Hornets’ offer didn’t even reach $170 million, Walker clearly turned his attention elsewhere — as he said he would.

“I’m not saying that I’ll sign back with them. … If it doesn’t work out, I’m definitely prepared to play somewhere else,” Walker said earlier this month.

Boston turned out to be that somewhere else.

It’s a natural fit on multiple levels. The Celtics have been bracing to lose All-Star point guard Kyrie Irving, and now have a three-time All-Star in Walker to slide into the starting spot. And Walker played his college basketball in Storrs, Connecticut, less than 90 miles from Boston and is still revered after leading the Huskies to the 2011 NCAA title. UConn beat Butler — coached by now-Celtics coach Brad Stevens — in that championship game.

Walker’s departure will be a major blow for the Hornets, who — barring a late sign-and-trade, which does not seem likely — will lose their franchise player for nothing. Walker’s departure comes a few weeks after backup point guard Tony Parker, the longtime San Antonio standout who played with Charlotte last season, announced his retirement from the NBA.