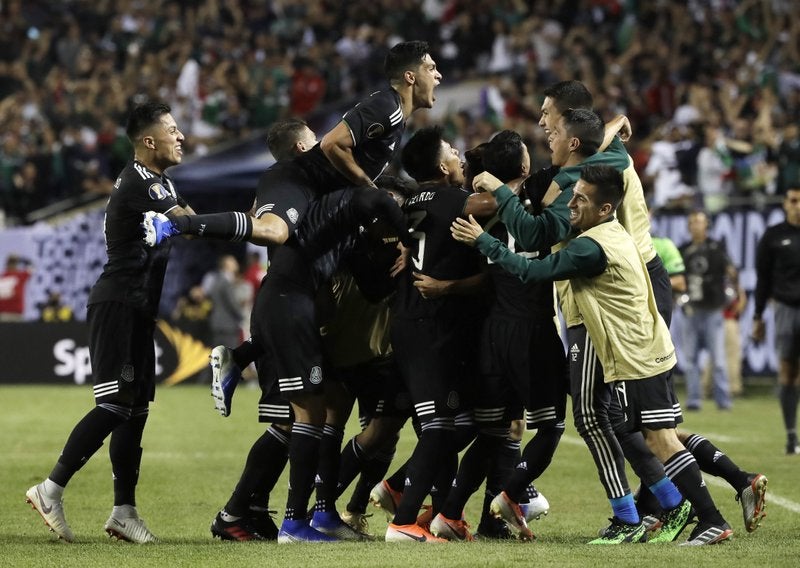 CHICAGO — U.S. men failed to follow the example of American women, showing just how far they are from success.

Christian Pulisic, the Americans’ 20-year-old star midfielder, was by far the best U.S. player and used bursts of speed and cutting ability to create chances.

Jordan Morris beat goalkeeper Guillermo Ochoa with a 6-yard header from Pulisic’s corner kick in the 51st minute, but Andrés Guardado headed the ball at the goal line.

Cristian Roldan had a chance to tie the score in the 87th minute, but his point-blank shot hit Héctor Moreno on the head and bounced away.

While the crowd in France was overwhelmingly pro-American as the U.S. beat the Netherlands 2-0 in the Women’s World Cup final earlier in the day, Mexican fans in green, white and red in the crowd of 62,493 made Solider Field seem like Mexico City’s Estadio Azteca. Whenever American Zack Steffen took a goal kick, there were loud chants of “puto,” an anti-gay slur Mexican fans repeatedly have been admonished for.

Mexico scored on a move started by Dos Santos, who plays in Major League Soccer for the LA Galaxy. He passed the ball to Rodolfo Pizarro, who switched from the left flank to the right in the second half. Pizarro crossed in the penalty area where Raúl Jiménez played a back-heel pass to Dos Santos, who had continued his run. His left-footed shot went by the outstretched arm of Steffen for just his third goal in 46 international appearances.

The U.S. has been rebuilding under Berhalter, the first American to coach the national team after playing in the World Cup for the U.S. Qualifying for the 2022 World Cup will not start until next summer, leaving the biennial championship of North and Central America and the Caribbean as the first measuring test for a team whose streak of seven straight World Cup appearances ended when it failed to make the field in Russia last year.

Mexico was playing in its first tournament under new coach Tata Martino. It has not lost a competitive match to the U.S. since 2013, re-establishing itself as the region’s power.