FIFA gets tougher on racism in disciplinary code update 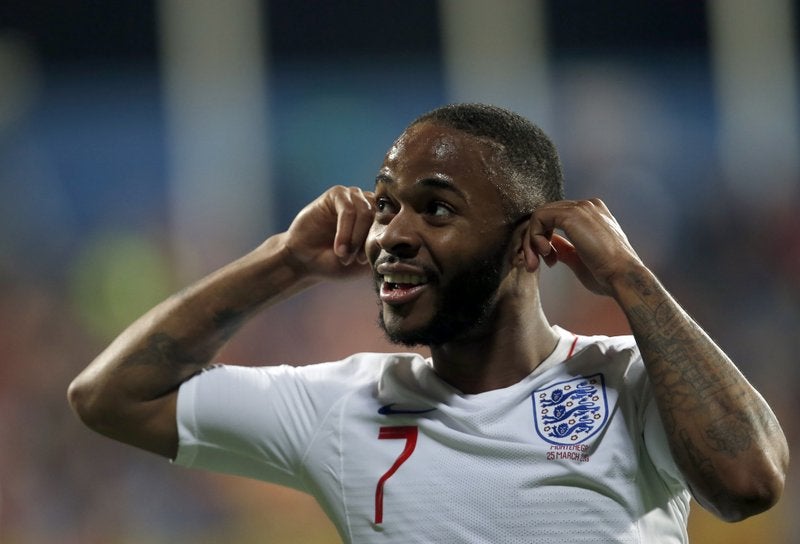 FILE – In this Monday, March 25, 2019 file photo, England’s Raheem Sterling celebrates scoring his side’s fifth goal after hearing racist chants, during their Euro 2020 group A qualifying soccer match against Montenegro at the City Stadium in Podgorica, Montenegro. FIFA is doubling its minimum ban for racist incidents to 10 games, and will start inviting players to make victim statements at disciplinary hearings. Stricter handling of racism and discrimination allegations is a key theme of the redrafted FIFA Disciplinary Code which takes effect next week. (AP Photo/Darko Vojinovic, file)

GENEVA — FIFA is doubling its minimum ban for racist incidents to 10 games, and will start inviting players to make victim statements at disciplinary hearings.

Stricter handling of discrimination allegations is a key theme of the redrafted FIFA disciplinary code which takes effect next week.

“Topics like racism and discrimination have been updated, putting FIFA at the forefront of the fight against this appalling attack on the fundamental human rights of individuals,” soccer’s world body said in a statement Thursday.

The minimum ban for players or officials rises from five to 10 games, and victims can soon be heard in person by FIFA judging panels.

“FIFA will not let down victims of racist abuse,” FIFA said, adding the victims “may be invited by the respective judicial body to make an oral or written victim impact statement.”

“For a first offense, playing a match with a limited number of spectators and a fine of at least 20,000 Swiss francs ($20,000) shall be imposed on the association or club concerned,” FIFA said.

In recent seasons, FIFA and European soccer body UEFA have closed cases of alleged racist abuse for lack of evidence beyond testimony of the players involved.

“In the past some players have felt let down by the action taken,” said Piara Powar, executive director of the Fare network, soccer’s leading discrimination monitoring group.

Overhauling its disciplinary rules, FIFA will also impose transfer bans on clubs that default on debts in cases processed in-house and at the Court of Arbitration for Sport (CAS).

FIFA is also preparing to open the doors of some judicial hearings, offer free legal counsel to parties, and publish more verdicts online.

“For the first time, certain types of disciplinary hearings — concerning doping and match-manipulation cases — will be open to the public if the parties request it,” FIFA said.

To modernize and improve its work, FIFA worked with London-based Fare and now includes specific language including sexual orientation as a discrimination issue, bringing it into line with FIFA’s statutes.

“We welcome the clear reference to homophobia,” Powar said. “FIFA has sanctioned acts of homophobia quite extensively in Latin America in particular, but the previous rules were not fit for purpose.”

When players are subject to abuse by fans, FIFA already has an escalating three-stage process for referees to act, leading to games being abandoned. It applies in all 2022 World Cup qualifying games, which Fare observers will attend after assessing the risk of discrimination.

FIFA has clarified that abandoned games are forfeited as a 3-0 loss by the fans’ team “unless there are exceptional circumstances.”

“Our expectation is that national Football Associations will mirror the new procedures and implement them,” Powar said of FIFA’s 211 member federations.

Transfer bans — typically imposed for breaking rules to sign youth players — will be extended to cases of defaulting on debts to players, coaches or other clubs. Previously, clubs risked a deduction of league points.

“A transfer ban has been shown to be the most effective instrument for this purpose,” said FIFA, which will lift a ban when debts are paid. Currently, teams are deducted points in about 10 mostly low-key cases per year, which are not publicized.

FIFA’s move toward more transparency will see judicial panel leaders make the final decision — to approve a request in a doping case or require it in a match-fixing prosecution — on allowing the media in and live-streaming proceedings.

This follows a European Court of Human Rights ruling last year which required CAS to relax secrecy around its traditional closed-door hearings. However, lawyers are rarely expected to recommend openness for their clients.