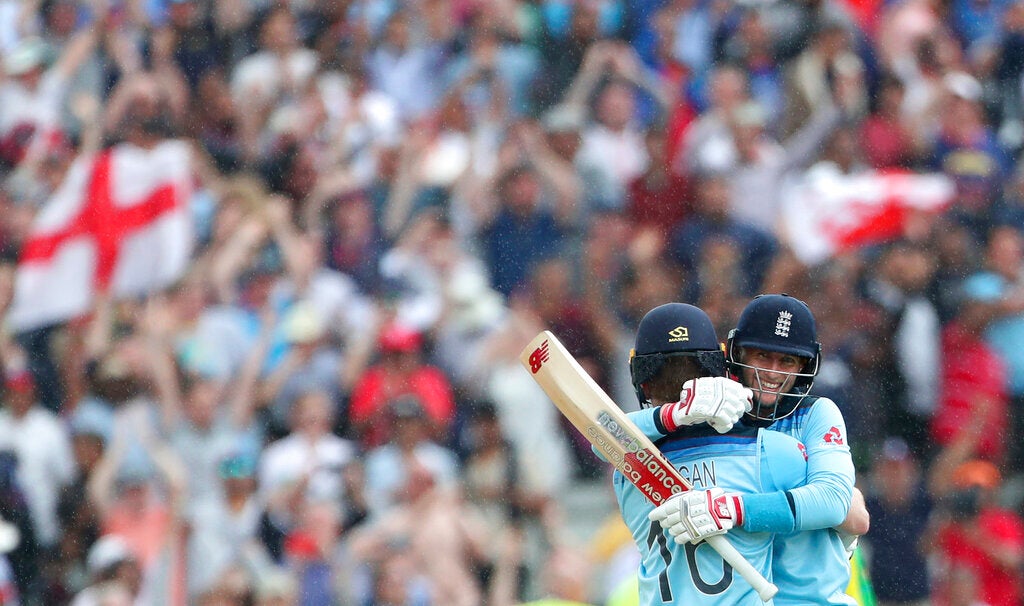 BIRMINGHAM, England— After a year of semifinal frustration for England football fans and players alike, the country is finally celebrating reaching the final of a major sporting tournament.

Eoin Morgan’s team thrashed traditional rival Australia in the semifinals of the Cricket World Cup on Thursday, exactly a year to the day since the England men’s football team went out in the World Cup semifinals.

Raucous fans at Edgbaston tweaked the football chant to sing “Cricket’s coming home” as England put the finishing touches on an impressive win over the defending champion by eight wickets with 107 balls to spare.

“Every England fan will have enjoyed that one!” British Prime Minister Theresa May tweeted. “Good luck for Sunday.”

May presides over the home of cricket, but the global showpiece has struggled to attract widespread public interest in England since the No. 1-ranked home side won the opener on May 30 — six weeks ago — against South Africa in London. It will probably be a different matter on Sunday in the final where England will face underdog New Zealand at Lord’s.

Bringing trophies home hasn’t been easy for England, whose fans tend to fear semifinals more than most.

This month, England was eliminated in the Women’s World Cup semifinals in France, losing to the United States 2-1. England captain Steph Houghton had a penalty kick saved in the 84th minute. That followed third place for England’s women at the 2015 World Cup and the semifinals at Euro 2017.

In June, the men’s team lost to the Netherlands 3-1 in extra time of the inaugural UEFA Nations League semifinals.

And on July 11 at the 2018 World Cup — in the semifinals — Croatia knocked England out of the tournament in extra time, extending the team’s 52-year wait for a second final appearance.

In the last major men’s cricket tournament, the 2017 Champions Trophy, England also bowed out … in the semifinals.

The rarity value of England winning a semifinal prompted Sky TV, the subscription broadcaster which owns the rights to the Cricket World Cup, to make the final on Sunday available to local free-to-air TV.

Asked, “Is it coming home?” Morgan played down the title talk.

“I wouldn’t get too carried away yet,” he said. “It is obviously a very exciting time for everybody, and ourselves included.

“Giving ourselves the opportunity for Sunday’s final is brilliant. We’ll be giving it everything we can in order to try and win that game.”

Morgan welcomed the TV decision amid growing support for the team and interest from the country.

In 2005, England regained the Ashes in a test series that sparked national celebrations, and then-Prime Minister Tony Blair invited the winning squad to Downing Street.

“(It’s) very cool,” Morgan said. “Particularly given the 2005 Ashes, for me, was sort of the day cricket became cool. Throughout the whole summer, the game was on the front and back page of every newspaper going around, everyone was talking about it.

“That is really good for the game and it’s the game I love.”