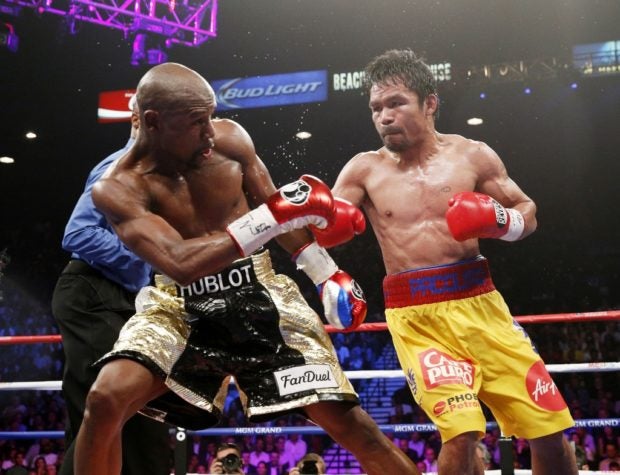 LOS ANGELES — Floyd Mayweather has “zero interest” in coming out of retirement for a rematch with Manny Pacquiao after their money-spinning 2015 superfight, close confidante Leonard Ellerbe said Wednesday.

Ellerbe, the chief executive of Mayweather Promotions, told the boxingscene.com website that not even the prospect of another lucrative payday would tempt Mayweather back into the ring.

Mayweather is believed to have earned an estimated $300 million from the points victory over Pacquiao, which remains the most lucrative fight in history and generated more than $600 million revenue.

Pacquiao’s long-time trainer Freddie Roach said last week he would be keen for the Filipino icon to set up a rematch with Mayweather after a frustrating defeat in the first meeting.

However while Mayweather will be at ringside for Pacquiao’s world title fight against Keith Thurman in Las Vegas on Saturday, Ellerbe says there is no chance of a rematch.

“Floyd has no interest,” Ellerbe told boxingscene. “He has zero interest. He’s been doing this all his life. And after a while, you get burned out. He’s given the sport everything.”

Ellerbe said Mayweather was instead happy in his retirement.

“He’s doing all the things that he never got a chance to do because boxing has consumed his life ever since he was 5 years old.”

Speaking to reporters last week, Roach said he was still bothered by Pacquiao’s loss to Mayweather, when the Filipino’s challenge was hampered by a shoulder problem.

“Hopefully we can get Mayweather to come to the table,” Roach said. “I would like us to have one more crack at him.”

“We didn’t fight a great fight that night. Manny’s shoulder didn’t help at all. He’s had surgery since then, he’s 100 percent now. I would like us to fight Mayweather again because I didn’t like the way we performed.”