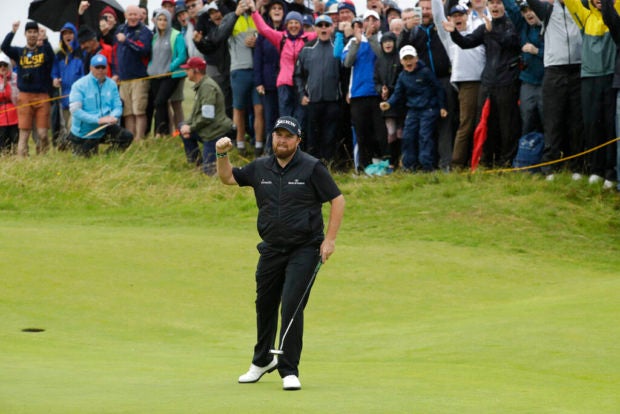 Ireland’s Shane Lowry celebrates after making a birdie at the 10th hole during the second round of the British Open Golf Championships at Royal Portrush in Northern Ireland, Friday, July 19, 2019.(AP Photo/Matt Dunham)

PORTRUSH, Northern Ireland — Everyone in the massive grandstand rose to cheer and celebrate a bold performance by Rory McIlroy, who longed for such support and affection on his walk toward his final hole at Royal Portrush in the British Open.

Except this was Friday.

And now McIlroy can only watch on the weekend as one of his best friends, Shane Lowry of Ireland, goes after the claret jug. Lowry birdied four of his opening five holes on his way to a 4-under 67 and shared the 36-hole lead with J.B. Holmes, who had a 68.

Lee Westwood and Tommy Fleetwood were one shot behind. Brooks Koepka and Jordan Spieth were three back.

This day was all about McIlroy, who kept the sellout crowd on edge as he tried to make the cut after opening with a 79. The roars had the intensity of a final round as McIlroy ran off five birdies in seven holes to brighten a gloomy sky over the North Atlantic. Needing one last birdie, his approach took a wrong turn along the humps left of the 18th green.

He was disappointed. He was proud of his play. Mostly, though, he said he was “full of gratitude toward every single one of the people that followed me to the very end and was willing me on.”

“As much as I came here at the start of the week saying I wanted to do it for me, by the end of the round there today I was doing it just as much for them,” he said.

Tiger Woods and Phil Mickelson won’t be around, either. It was the first time in 77 majors they have played as professionals that both missed the cut in the same major. Darren Clarke, who honed his game on the Dunluce Links as a junior and now calls Portrush home, missed the cut in a most cruel fashion with a triple bogey on his final hole.

And now the first British Open in Northern Ireland since 1951 moves on without them, still with the promise of a great show.

Lowry was so nervous he was shaking on the tee when the tournament began Thursday, swept up in the emotion of an Open on the Emerald Isle, and on a course he knows. He gave fans plenty to cheer when he opened his second round with three straight birdies, added a birdie on the fifth and holed a 40-foot birdie putt on No. 10 to reach 10 under, making him the only player this week to reach double figures under par. The cheers were as loud as he has heard.

“Just incredible,” Lowry said. “You can’t but smile, but can’t but laugh how it is. There’s no point trying to shy away from it. It’s an incredible feeling getting applauded on every green, every tee box. I’m out there giving my best, trying to do my best for everyone.”

He three-putted the 14th, saved par on the next three holes with his deft touch around the greens, and closed with a bogey to fall back into a tie with Holmes, who played earlier in the day and was the first to post at 8-under 134.

Holmes won at Riviera earlier this year, and then failed to make the cut in eight of his next 12 tournaments as he battled a two-way miss off the tee and felt so bad that he never thought he’d recover. But he did enough in Detroit three weeks ago to regain some confidence, and he has been in a groove at Portrush.

“You can have that great round and that day where everything goes right. But it’s nice to get two rounds in a row,” Holmes said. “It shows a little consistency. And two days in a row I’ve hit the ball really well and putted well.”

Fleetwood and Westwood, two Englishmen at different stages in their careers, each had a 67 and will play in the group ahead of Lowry and Holmes. Westwood is 46 and can make a case as the best active player without a major considering his status — a former No. 1 in the world and on the European Tour — and the number of near misses in the majors, such as Muirfield and Turnberry at the Open, Torrey Pines in the U.S. Open and Augusta National when Mickelson out played him in 2010.

Is it too late? Westwood wasn’t willing to look that far ahead.

The experience of winning majors was behind them.

Justin Rose had a 67 and was two shots behind, along with Cameron Smith of Australia and Justin Harding of South Africa. Another shot back was a group that included Koepka, who has won three of the last six majors. He was in a tie for eighth, the 16th time in his last 17 rounds at the majors he has ended a round in the top 10.

Koepka wasn’t happy with much about his 2-under 69, calling it “a little bit disappointing,” perhaps because he played in dry weather and only a mild wind.

“But at the same time, I’m close enough where I play a good weekend, I’ll be in good shape,” he said.

Spieth hasn’t quite figured out how to get the ball in play more often — too many bunkers on Thursday, too much high grass on Friday. But that putter is not a problem, and it carried him to a collection of mid-range birdie and par putts for a 67.

“I’m in contention. I feel good,” Spieth said, winless since his Open title at Royal Birkdale two years ago. “I feel like if I can continue to improve each day, hit the ball better tomorrow than I did today, and better on Sunday than Saturday, then I should have a chance with how I feel on and around the greens.”

Graeme McDowell, born and raised in Portrush, played well enough to make the weekend. He finished with four straight pars for a 70 to make the cut on the number at 1-over 143, and felt the pressure of sticking around for the home crowd.

Woods, meanwhile, began this major championship season as the Masters champion, ended it as a mystery. He missed the cut in two of the next three majors, and never seemed fully fit or engaged at the British Open. He was 3 under for his round through 11 holes with hopes of making it to the weekend, but he had no more birdies and finished with two bogeys for a 70 to miss by five shots.

“I’m going to have my hot weeks. I’m going to be there in contention with a chance to win, and I will win tournaments,” Woods said, facing the reality of a 43-year-old who has gone through eight surgeries on his knee and back. “But there are times when I’m just not going to be there.”