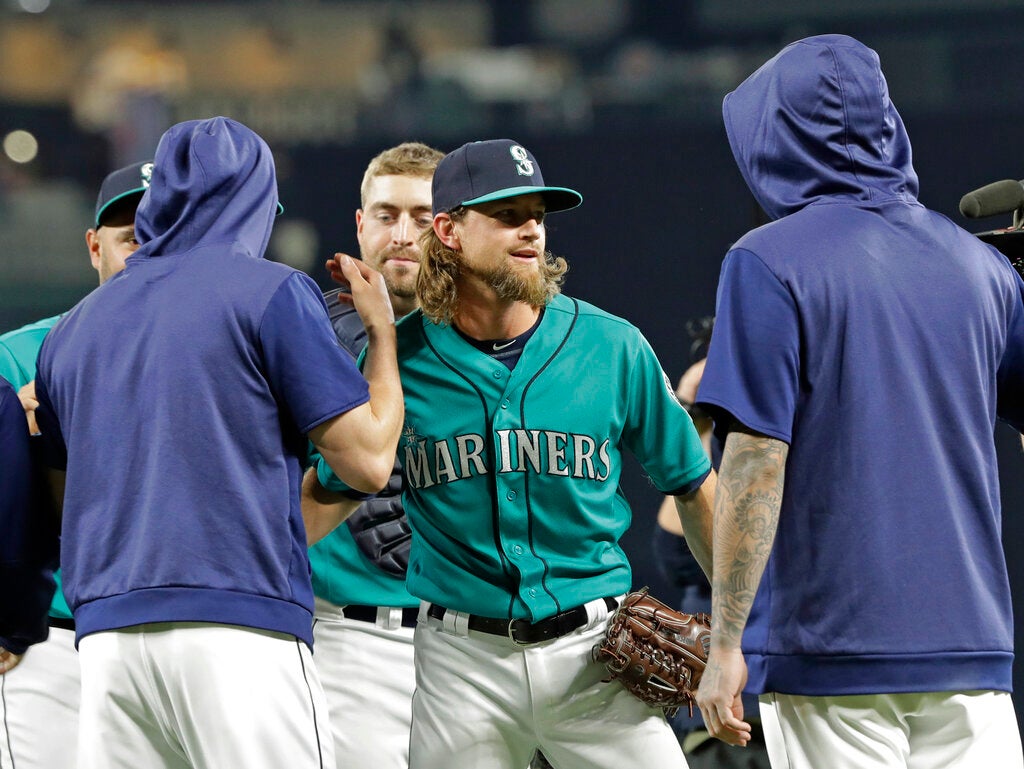 Seattle Mariners starting pitcher Mike Leake, center, is greeted by teammates after he threw a one-hitter against the Los Angeles Angels in a baseball game Friday, July 19, 2019, in Seattle. The Mariners won 10-0. (AP Photo/Ted S. Warren)

SEATTLE  — Mike Leake of the Seattle Mariners lost his bid to pitch a perfect game on a leadoff single in the ninth inning by rookie Luis Rengifo, then finished off the Los Angeles Angels for a 10-0 win Friday night.

A week after the worst start of his career, Leake almost achieved baseball immortality.

The Angels hadn’t come close to a hit and Leake hadn’t gone to a three-ball count before Rengifo grounded a clean hit to right field on Leake’s 79th pitch.

The fans gave Leake a standing ovation and he quickly waved to acknowledge their cheers.

After a walk, Leake (8-8) retired the next three batters for a one-hitter, striking out Mike Trout on a full-count pitch to end it. Leake fanned six overall and walked one.

Leake’s second career shutout came exactly a week after he was tagged by the Angels in his previous start, giving up seven runs on eight hits and a walk while getting just two outs. The Angels pitched a combined no-hitter that night in Anaheim while the entire club wore jerseys honoring late teammate Tyler Skaggs.

ATLANTA— Josh Donaldson’s bases-loaded single off Fernando Rodney in the ninth inning lifted Atlanta over Washington after Luke Jackson allowed a tying, two-run homer to Victor Robles in the top half.

Ronald Acuña Jr., who had three hits, led off the bottom of the ninth with a walk off Rodney (0-3) and took second on Dansby Swanson’s single. Freddie Freeman walked on four pitches, loading the bases.

Nationals manager Dave Martinez brought in left fielder Juan Soto as a fifth infielder, including three on the left side against the right-handed hitting Donaldson.

Donaldson hit a 2-0 pitch over Robles to center-field warning track, and the Braves boosted their NL East lead to 6½ games over the second-place Nationals. Atlanta had lost its previous five home games against Washington.

Encarnación lined his 12th career slam in the third inning off Kyle Freeland, and first-year Yankees DJ LeMahieu, Adam Ottavino and Mike Tauchman poured it on in their first games against their old club. LeMahieu had two hits and two RBIs, Ottavino struck out the side in a perfect relief inning and Tauchman had a career-high three hits, a stolen base and threw out a runner at home plate from left field.

Aaron Judge added a two-run homer, and J.A. Happ (8-5) struck out eight while pitching two-run ball over five innings for the Yankees. New York came from behind to win for a fourth straight game and improved to a major league-best 63-33 — 30 games over .500 for the first time this season. The Yankees lead second-place Tampa Bay by a season-high nine games in the AL East.

Jose Altuve, Alex Bregman and Yordan Alvarez led off the third inning with consecutive home runs to extend Houston’s lead to 4-0. Altuve hit his homer to left-center field, and Bregman sent his to left on the next pitch before Alvarez hit a 474-foot monster shot into the second deck in right field.

It was the first time the Astros had hit three straight homers since June, 20, 2018, against Tampa Bay.

Yuli Gurriel led off the second with a solo shot to left.

Verlander (12-4) allowed two runs and eight hits. The right-hander struck out at least 11 for the fourth time this season.

MINNEAPOLIS — Marcus Semien led off the game with a home run and later tripled and doubled as Oakland kept rolling, topping Minnesota on a sweltering night.

The temperature at first pitch was 94 degrees on a humid, muggy evening. It was tied for the second-hottest start in Target Field’s 10-year history, trailing only a 97-degree reading on July 16, 2012.

Khris Davis hit a pair of RBI singles as the A’s won for the 20th time in 26 games. The AL Central-leading Twins have lost four of five.

Playing at Dodger Stadium for the first time since the All-Star break, the NL West leaders turned a Miami error into the go-ahead run in the sixth.

Ryu (11-2), who started for the National League in the All-Star game, gave up one run on four hits with three walks and seven strikeouts.

Maeda took over for Ryu in the eighth, his first relief appearance this season. Maeda is expected to return to the rotation, but he was used out of the bullpen this time after a 35-pitch, rain-shortened start Wednesday at Philadelphia.

On a night dominated by starting pitchers Jacob deGrom of New York and Tyler Beede of San Francisco, it took a misplay in the field to score the only run of the game. Pablo Sandoval hit a fly ball off Jacob Rhame (0-1) that looked like it would be a routine out to end the inning. But left fielder Dominic Smith came in and misplayed the ball for an error, perhaps distracted by shortstop Amed Rosario.

Dickerson never stopped running and scored when cutoff man Todd Frazier’s throw home was off target, sending the Giants pouring out of the dugout in celebration. The victory lifted the Giants’ record to 49-49, the first time they have been at .500 since the start of the season.

The Diamondbacks broke open the game with six runs in the third inning against Jhoulys Chacin (3-10), punctuated by hitting a single, double, triple and home run in four straight at-bats.

Arizona’s Eduardo Escobar homered and had a run-scoring triple, and All-Star Ketel Marte had two RBIs for a career-high 60.

Archie Bradley (3-4) allowed a hit in 1 1/3 innings and Greg Holland worked a perfect ninth for his 16th save.

Christian Yelich hit a two-run homer, his majors-leading 35th, and Lorenzo Cain hit a solo shot for the Brewers, who scored three runs in the seventh inning to pull within 10-7.

García became the first White Sox player to have three doubles in a game since Adam Eaton against Minnesota on Aug. 2, 2014.

López (5-8) gave up two runs and six hits in seven innings with eight strikeouts. He had been 0-2 with a 5.34 ERA since beating Kansas City on June 9.

Tampa Bay dropped a season-high nine games behind the AL East-leading Yankees after arriving about 3:30 a.m. following a doubleheader loss in New York. The Rays have dropped behind Cleveland and Oakland for the two AL wild-card spots. The Rays held an eight-game lead over the third-place team in the wild-card race at the start of play on June 11 but have lost 20 of 35 since.

BALTIMORE— Anthony Santander and Keon Broxton homered off David Price, and Baltimore got six solid innings from rookie right-hander John Means in a rout of Boston.

Price (7-3) allowed six runs, eight hits and a walk in four innings to take his first loss in 13 starts since April 27. The left-hander was 8-0 at Camden Yards and 16-5 lifetime against the Orioles before turning in a surprisingly ineffective performance in 96-degree heat against the team with the worst record in the big leagues.

Sam Travis homered for the Red Sox, who had won 14 of their previous 16 road games.

Boston leadoff hitter Mookie Betts had his streak of scoring in 13 straight games come to an end, one short of breaking the franchise record he now shares with Ted Williams (1946).

CINCINNATI  — Jose Martinez homered and singled during a 10-run rally in the sixth inning and St. Louis overcame a seven-run deficit for a wild win over Cincinnati.

Down 7-0, the Cardinals put together their biggest inning of the season on the way to their sixth win in seven games.

Jesse Winker hit a two-out, two-run single in the ninth off Cardinals closer Carlos Martinez. But Joey Votto grounded out with runners at the corners to give Martinez his seventh save.

Journeyman catcher Ryan Lavarnway hit two homers, doubled and drove in a career-high six runs for Cincinnati in his first game in the majors this season.

DETROIT — Marcus Stroman breezed through seven scoreless innings, and Toronto batted around in both the fourth and the sixth on its way to a rout of Detroit.

Teoscar Hernandez homered for Toronto, which scored four runs in the fourth and five in the sixth, sending 10 batters to the plate in each inning. The Tigers lost for the 26th time in their last 29 home games. That does not include a May 19 game in which Detroit was also losing when the contest was suspended.

Stroman (6-10) allowed six hits. The All-Star right-hander struck out five with no walks in what was his first career start at Detroit.

Jordan Zimmermann (0-7) is now winless in his last 16 starts.

Harper hit a seventh-inning single off Pirates reliever Richard Rodríguez (3-4) that scored pinch-hitter Brad Miller to give the Phillies their first lead of the game.

Rookie outfielder Adam Haseley added a solo homer to start the scoring and a run-scoring double to cap it for the Phillies. The rally made a winner of Juan Nicasio (2-3), who pitched one-third of an inning in relief of starter Jake Arrieta.

Mercado had an RBI double in the third inning and a run-scoring single in the sixth. He also scored twice.

Mercado is batting .423 (11 for 26) with three home runs and eight RBIs over the last eight games. He was called up from Triple-A Columbus on May 14 and became the 12th Indians rookie since 1913 to have at least five hits in a game.

Shane Bieber (9-3), making his second start since being named MVP of the All-Star Game held at Progressive Field, allowed five runs in 5 2/3 innings.

Javier Báez also homered for the NL Central-leading Cubs, who have won six of seven since the All-Star break.

Josh Naylor tied the score 5-5 in the eighth inning against Pedro Strop (2-3) with his first career pinch homer, but the Cubs went back ahead in the bottom half.

Anthony Rizzo singled off Craig Stammen (6-5), rookie shortstop Fernandez Tatis Jr. threw Addison Russell’s grounder into center field for an error, Jason Heyward was intentionally walked and David Bote hit a grounder to third. Machado threw home for a forceout and catcher Francisco Mejia threw to first, even though he didn’t have a play on Bote. The ball hit off the glove of first baseman Eric Hosmer and bounced into short right field as Rizzo scored on Hosmer’s error.