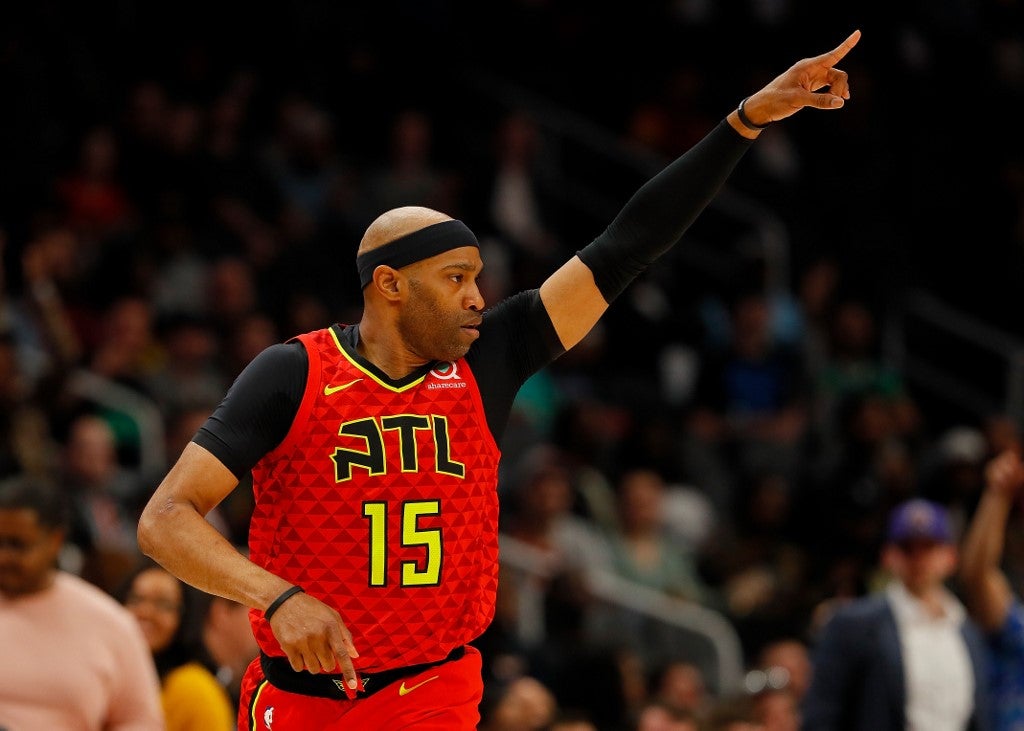 FILE – Vince Carter #15 of the Atlanta Hawks reacts after hitting a three-point basket against the Memphis Grizzlies in the first half at State Farm Arena on March 13, 2019 in Atlanta, Georgia. Kevin C. Cox/Getty Images/AFP

ATLANTA — Vince Carter is putting off retirement for at least one more season.

With that, he’ll claim the longest career in NBA history all to himself.

A person familiar with the situation confirmed that Carter has agreed to terms on a one-year contract to return to the Atlanta Hawks for his record 22nd season. The person spoke to The Associated Press on condition of anonymity because the deal has not been announced.

The 42-year-old Carter never wavered in his desire to play with someone this season. He is tied with Robert Parish, Kevin Garnett, Kevin Willis and recently retired Dirk Nowitzki — all of whom played for 21 seasons — for the longest career in NBA history.

“Just waiting for the right opportunity,” he said on a recent conference call to discuss the upcoming Jr. NBA Global Championship, when questioned by a reporter from the Atlanta Journal-Constitution. “Nothing has changed as far as that goal and that dream of mine.”

The deal was first reported by ESPN.

Essentially an extra coach during his first season with the Hawks, Carter served as a mentor to some of the NBA’s most promising young talent, including point guard Trae Young and forward John Collins.

Carter also showed last season that he’s still got some hoop skills. He was a valuable member of the playing rotation on a rebuilding team, playing in 76 games with nine starts, averaging 17.5 minutes and 7.4 points per contest.

While Carter is likely to get less playing time after the additions of Hunter and Reddish, the Hawks wanted him back and finish off what is expected to be a 14-man roster this season.

Carter entered the league in 1998 — the same year Young was born — as the fifth overall pick out of North Carolina. He sparked a wave of “Vinsanity” in Toronto, where his high-flying style made him one of the league’s top players. He began a run of 10 straight seasons where he was selected to the All-Star Game appearances and averaged more than 20 points a game.

Carter was dealt to New Jersey in a blockbuster trade early in the 2004-05 and spent nearly five seasons with the Nets. Since then, he bounced around to Orlando, Phoenix, Dallas, Memphis and Sacramento before landing in Atlanta last season.

The only blemish on his resume is the lack of an NBA title, which isn’t likely to change in Atlanta. The Hawks, who are in the midst of a total roster makeover focused on young talent, went 29-53 last season and are again pegged as a longshot to make the playoffs in the Eastern Conference.

After reporting for training camp a year ago in Atlanta, Carter said he still feels like a 20-something when a new season rolls around.

Coach Lloyd Pierce, who is heading into his second season with the Hawks, loved having Carter around to give players such as Young and Collins an extra shoulder to lean on during their transition to the NBA.

Pierce is only eight months older than Carter.

“When we have our locker room and on-the-bus debates and conversations, he’s on our side,” Pierce joked. “He can relate a little closer to the coaching staff than he can with the players.”