Duterte: Gilas no chance vs Italy in Fiba World Cup, let’s bet on China instead 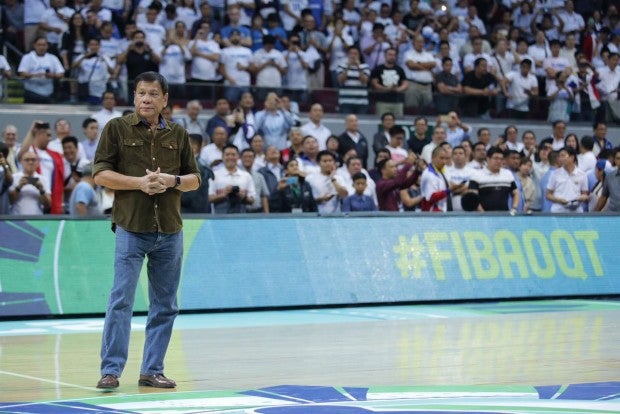 FILE – President Rodrigo Duterte in attendance at the FIBA OQT game between France and Philippines. Photo by Tristan Tamayo/INQUIRER.net

MANILA, Philippines—President Rodrigo Duterte doesn’t like the chances of Gilas Pilipinas against Italy in the upcoming Fiba World Cup 2019 in China.

Duterte is reportedly set to fly to China later this month to meet with Chinese President Xi Jinping and watch the Basketball World Cup where the Philippine national squad is set to face Italy, Serbia, and Angola in the group stages.

READ: Duterte to visit China in August for 5th time

(We will lose. We don’t have a chance. Let’s just bet on China. We will lose to Italy. Those idiots are big.)

However, Duterte said Gilas can easily beat Angola in the Group D matchup.

(Angola, that we can bury alive.)

Malacañang has yet to release details of Duterte’s impending fifth visit to China.