Getting that 'GLOW': Women around the world step into the ring | Inquirer Sports

Getting that ‘GLOW’: Women around the world step into the ring 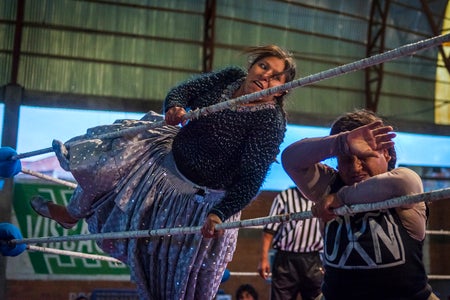 El Alto, Bolivia – Dec. 8, 2013: Cholita wrestlers during a wrestling fight in the city of El Alto, Bolivia. The Fighting Cholitas are a group of female wrestlers. INQUIRER.net stock photo

From the freestyle wrestling of Bolivia’s indigenous female wrestlers to the inclusive arena of Britain’s EVE league, there’s never been as much interest in women’s wrestling. Could it be that the hit Netflix series “GLOW”, which is back for a third season, might just have a lot to do with it?

The Guardian tracked the trend, putting the spotlight on EVE, the “riot grrls of wrestling,” who tout themselves as “Punk, Feminist, Empowered. Women Superheros Come To Life!” delighting audiences up and down the British Isles with their highly theatrical show (all the while supporting a number of charities and causes).

Elsewhere, 19-year-old Malaysian pro-wrestler Nor Diana, aka Phoenix, demonstrates that the same feeling of empowerment is what motivates the young hijab-wearing pro wrestler to hit the ring.

Likewise, the proud wearing of traditional garb in an otherwise spandex-wrapped world has been an integral part of some South American cultures, as reported on by The Washington Post and National Geographic. From Mexico to Bolivia, cholitas luchadoras have been taking on the mantle of a male-dominated sport (in petticoats, no less), putting on a show just about as colorful as anything the WWF has ever put on at the height of the neon 1980s.

Closer to the home (and aesthetic) of GLOW, World Wrestling Entertainment (WWE) featured its first-ever women’s main event during last April’s Wrestlemania, indicating that the success of GLOW might just have opened the notoriously macho American market to a mainstreaming of women’s wrestling.

The Guardian provides another interpretation of the phenomenon, courtesy of University of Iowa Professor Kerry Howley (author of the 2014 bestselling tome “Thrown”). According to Howley, women’s adherence to wrestling presents an alternative to the American zeitgeist’s obsessive adherence to wellness dictates.

“For many women there is an attraction to a way of life not bound to…preserving life years, of carefully guarding every cell from the inevitable …” she told the British daily. JB