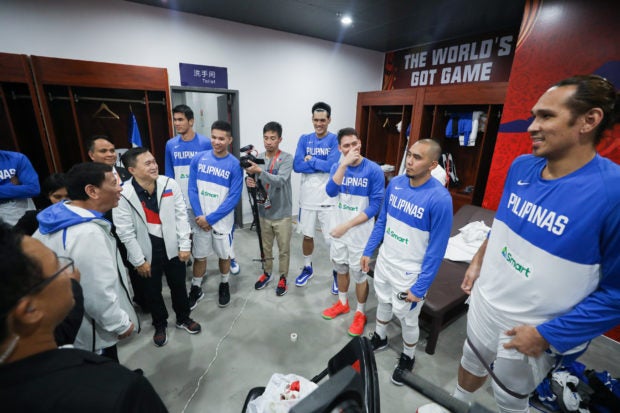 President Rodrigo Roa Duterte and Senator Christopher Lawrence Go share a light moment with the members of Gilas Pilipinas as they visit the locker room before watching the Philippines men’s national basketball team go up against Italy during the FIBA Basketball World Cup 2019 game at the Foshan International Sports and Cultural Center in Guangdong on August 31, 2019. SIMEON CELI/ PRESIDENTIAL PHOTO

MANILA, Philippines — Despite a loss against powerhouse basketball team Italy, Gilas Pilipinas still deserves admiration for the “grit and passion” they showed during the game, the Palace said Saturday night.

Gilas Pilipinas suffered a 108-62 beatdown against Italy at the start of their campaign in the 2019 Fiba World Cup at Foshan International Sports and Cultural Center in China.

But Panelo noted that “it’s not always the winning that counts, it’s how the game is played.”

“In the end we were outplayed and outscored but not without displaying some flashes of brilliance, although few and far between,” Panelo said in a statement.

“It’s not always the winning that counts, it’s how the game is played. Our Filipino players played with grit and passion.And for that they deserve our admiration,” he added.

Further, Panelo confirmed that President Rodrigo Duterte was also present during the game.

Before the game started, Duterte also visited the team, telling them that it is “never too late to dream.”

“We are here to give you the spirit to fight, kaya natin ‘to (we can do this),” Duterte encouraged the team.

READ: Duterte meets Gilas players in China: ‘We are praying for your victory’