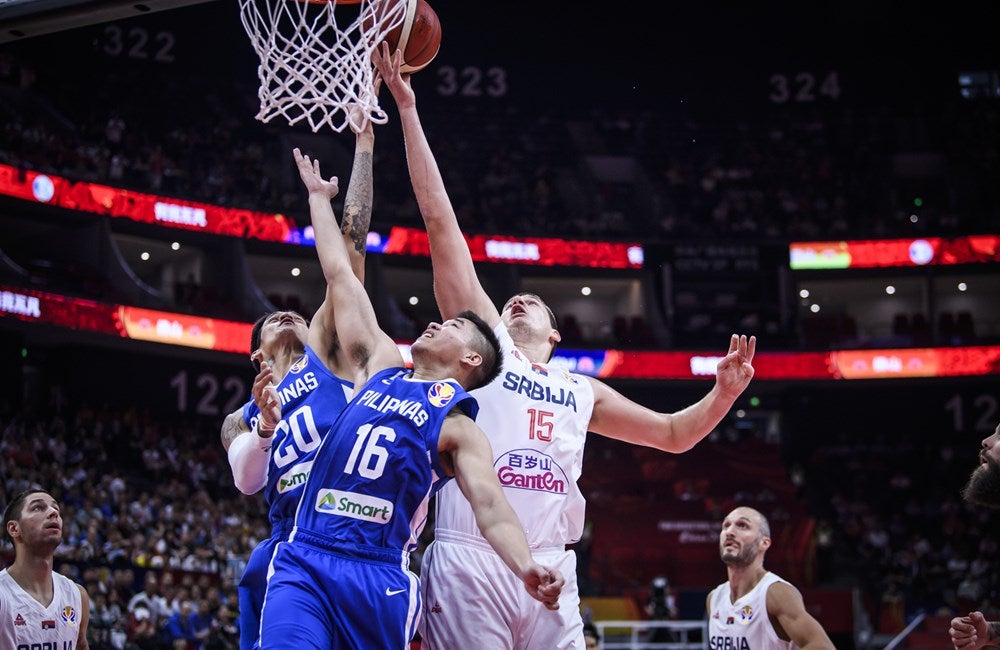 FOSHAN, China—Battling for survival against an enemy that was too big, too athletic and better at practically every aspect, Gilas Pilipinas on Monday night bowed out of contention in the Fiba World Cup—even if the Filipinos did play a much better game compared to two nights before.

Serbia, a team tipped by many as a force that could unseat the United States, dilly-dallied early by keeping Nikola Jokic out of the starting unit, but once it buckled down to work, ran roughshod on the Filipinos on the way to a 126-67 victory for a share of the Group D lead at Foshan International Sports and Cultural Arena here.

“Serbia is just too big, too good. I feel that Serbia has a good chance against the US and all the other tough teams. Our goal was to keep it close, but we couldn’t keep it close too long,” said Gilas head coach Yeng Guiao.

“There’s no way we could beat them inside the paint, they’re just too big and too good. Even their bigs were shooting the outside shot really well.”

Gilas had its first taste in the tournament, 9-7, courtesy of a Paul Lee short stab off the glass with four minutes gone in the first quarter, a short-lived stab at glory before the Serbs methodically broke away to break the hearts of a good-sized Filipino gallery that tried its very best coaxing the best out of Gilas in vain.

Raining three-pointers on the dumbfounded Gilas defense, Serbia opened up a 15-point lead at the end of the first, sat on a 27-point bubble at halftime, and then blew the Filipinos to bits inside the first three minutes of the third with a 72-35 lead Gilas never came close to overhauling.

”Tough loss. Our job was to make the game close. I think Serbia is the No. 1 team right now. Serbia was just too much for us,” Lee said.

It was the second straight defeat for the Filipinos, who lost their opening game, 108-62 to Italy. And though they showed a lot of fight in this one, they were simply no match at the brand of basketball the Serbs are capable of playing.

The Serbs doubled up on the Filipinos, 82-41, with 4:35 to play, and it was time for Jokic to get some rest. In appreciation, the Filipino gallery gave the Denver Nugget center in the NBA a huge round of applause while he was returning to the bench.

“Even if we tried to put our hands in their faces, it was not enough for us to disrupt their shots,” Guiao said. “They’re just too big and too good for us at this point.”

Losing for the second straight time meant that the Filipinos will not advance past group play, with the match against Angola on Wednesday staking nothing but a winning feeling for both squads before going home.

That means that, unless Gilas finds a way to top a Quaifying Tournament in February next year, the Philippines will again be out of the Olympics in Tokyo next year, making for a 48-year absence and counting in the Summer Games.

Win or lose against the Angolans, the Filipinos will be playing in the consolation round next and would need to finish in the top 24 overall to have a chance to play in the OQT.