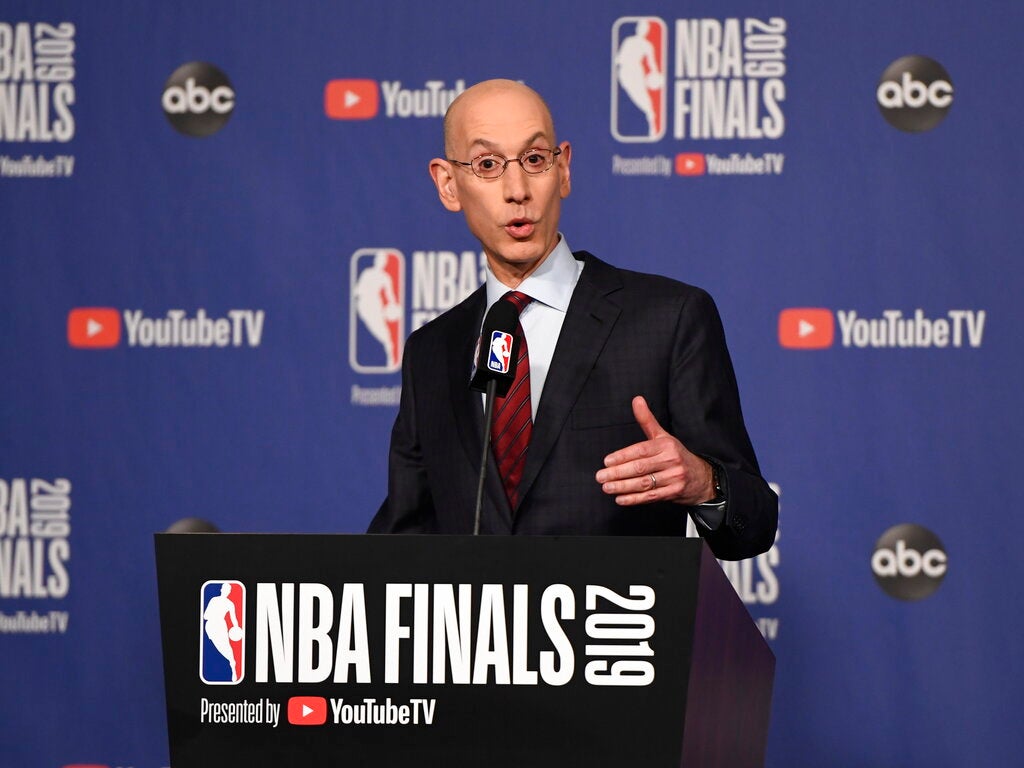 NBA Commissioner Adam Silver holds a news conference before Game 1 of basketball’s NBA Finals between the Golden State Warriors and the Toronto Raptors, Thursday, May 30, 2019, in Toronto. (Frank Gunn/The Canadian Press via AP)

BEIJING — NBA teams could be fined up to $10 million for tampering and up to $6 million for entering into unauthorized agreements with players, a person with knowledge of the league’s plans told The Associated Press on Saturday.

Other maximum-fine levels could be raised significantly as well, provided the league’s board of governors approves the measures Sept. 20. The league sent a memo to teams on Friday detailing the proposed fines, according to the person who spoke on condition of anonymity because the details were not to be released publicly.

The memo addresses what the league called a “widespread perception that many of the league’s rules are being broken on a frequent basis” when it comes to tampering, salary cap matters and the timing of free agency discussions.

In addition, teams will have to require its governor, top basketball operations executive and negotiators to certify annually that they did not talk to free agents or their representatives before the league rules allow. And with every player contract signed, each team’s governor will have to certify that no unauthorized benefits were offered and no rules were broken.

“It’s pointless, at the end of the day, to have rules that we can’t enforce,” NBA Commissioner Adam Silver said in July after the board of governors met and talked about ways to adjust that process in an effort to ensure fairness across the league.

Fines for tampering with players or team personnel could go as high as $10 million, double the current limit. If a team enters into an unauthorized deal with a player, it can be fined up to $6 million — and the player can get hit with a $250,000 fine as well.

Statements or conduct detrimental to the NBA could come with a $5 million fine now, up from the previous ceiling of $1 million. And a rule violation with no specific penalty could merit a $10 million fine, up from $2.5 million — the amount that Silver fined former Los Angeles Clippers owner Donald Sterling while banning him for life from the NBA in 2014 after he was found to have made racist remarks.

The league also has other penalties within its reach, such as forfeiture or transfer of draft picks, suspensions, voiding of contracts and prohibiting teams from hiring the person they tampered with.

Silver said in July that changes have to be made to the free-agent process after several deals were clearly struck before the negotiating period started on June 30 at 6 p.m. EDT. In theory, teams couldn’t talk to free agents before that time — which would mean that actually striking deals before then would be impossible.

The NBA has been largely powerless to stop the practice, which has gone on for years and seemed to be particularly out of control this summer. In the first 90 minutes of free agency this summer, at least $1.4 billion in contracts were committed to across the league — and those were just the ones known about.