Jeered and insulted by some PSG fans, Neymar scores winner in return 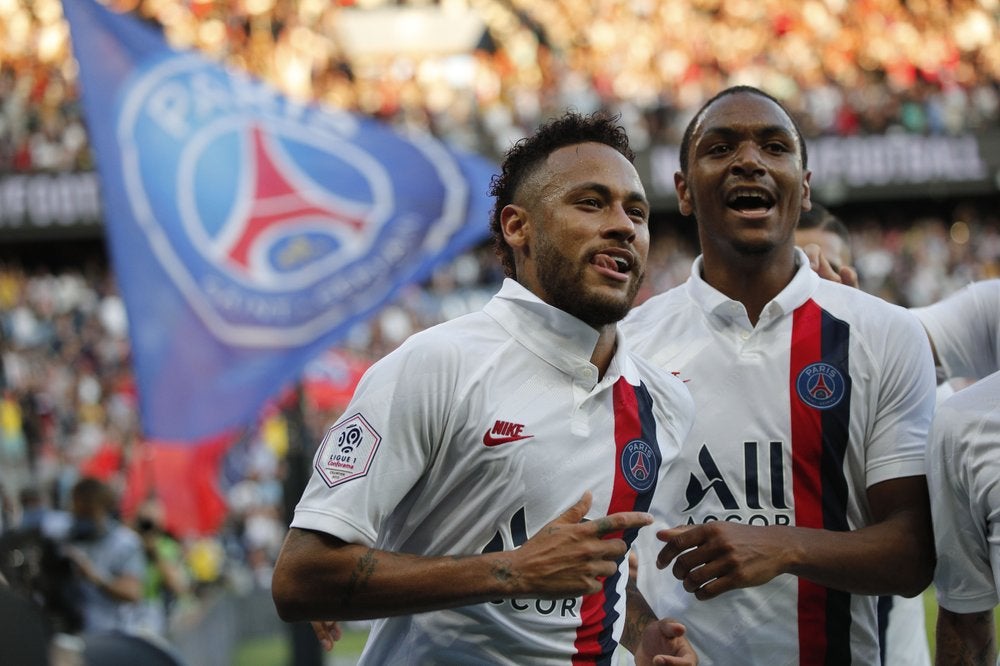 PARIS — Amid loud jeers and insulting banners from his own fans, Neymar scored a stunning bicycle kick during injury time for French league leader Paris Saint-Germain to beat Strasbourg 1-0 on Saturday.

Neymar met Abdou Diallo’s left-wing cross as it drifted behind him, brilliantly hooking it in with his left foot as he was falling backward. Even as Neymar celebrated, PSG ultras behind the goal where he scored still jeered him.

He angered those fans with his public desire to rejoin former club Barcelona in the offseason. The forward, who scored for Brazil last week, sat out four league games as he tried to force a move back but talks broke down.

“I stayed calm. We all know what happened; I understand that it’s very difficult for them,” Neymar said. “But as from now I am a PSG player. If they want to whistle me, no problem.”

Two offensive banners insulting Neymar — and his father who has also represented him in transfer talks — were also deployed at Parc des Princes. One of those referenced Neymar’s reported willingness to spend 20 million euros ($22 million) of his own money to push through the deal, which would reunite him with his friend and former teammate Lionel Messi.

Neymar thought he scored a second goal with seconds left, but Angel Di Maria was ruled offside before squaring to give him a tap-in.

Aside from the spectacular goal, it was mostly a rough afternoon for Neymar.

Some fans whistled and made offensive hand gestures when he ran out onto the field for the pre-match warmup. Then, when Neymar’s name was read out over the loudspeaker as the teams were announced, PSG’s ultras jeered loudly.

His first few touches of the ball were also met with loud boos. He was loudly whistled when he took a first-half corner and jeered again after trying an audacious lob over the goalkeeper from far out. The vitriol from PSG ultras behind the goal continued in the second half, although other sections of the crowd cheered him.

“It wasn’t easy because he’s a very sensitive person,” PSG coach Thomas Tuchel said. “It wasn’t either for the fans during the transfer window, and for that reason we have to accept their reaction … That’s the way it is.”

Neymar was asked if he had a message for the ultras.

“No, nothing. I just want to thank my teammates for allowing me to score this goal,” he said in comments translated to French. “The other players don’t deserve to put up with this situation. When the fans are behind the team, we are stronger together.”

It was his sheer determination to leave the club, along with an interview recounting how much he enjoyed playing in Barca’s 6-1 humiliation of PSG in the Champions League in 2017, which led to hostile chanting against him by PSG ultras in a home game last month.

One banner held aloft during that game urged him to “Get Lost.”

Neymar faced Strasbourg again, having been injured when the teams met in a physical French Cup match in January.

Meanwhile, goalkeeper Keylor Navas made his PSG debut after joining on a long-term contract from Real Madrid.

He made a crucial save in the 18th, diving low to his left to stop Ludovic Ajorque’s stinging shot reaching the bottom corner, and denied the striker again with 15 minutes left.

Striker Mauro Icardi, who joined PSG on a season loan from Inter Milan, came off the bench in the second half.

PSG is two points ahead of second-place Rennes, which drew at Brest 0-0.

Bordeaux beat Metz 2-0 at home, both goals inside the first 10 minutes.

Bottom side Dijon picked up its first point in a 0-0 home draw with Nimes.

Lyon drew at Amiens 2-2 on Friday.