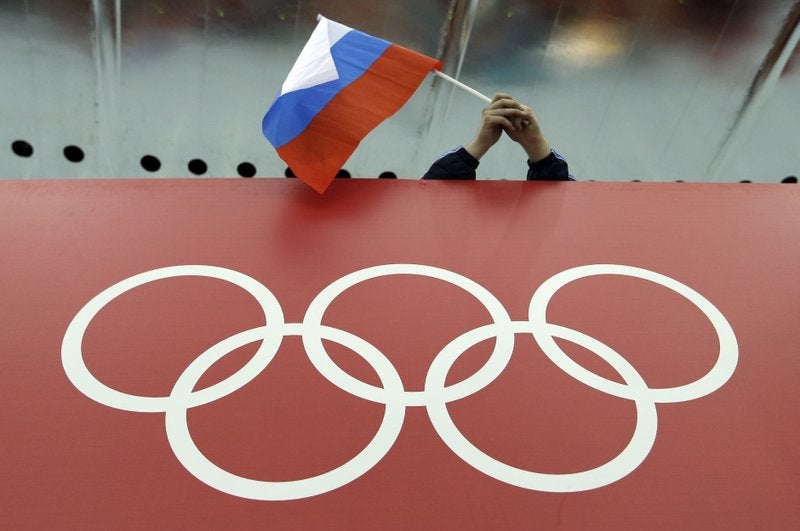 FILE – In this Feb. 18, 2014 file photo, a Russian skating fan holds the country’s national flag over the Olympic rings before the men’s 10,000-meter speedskating race at Adler Arena Skating Center during the Winter Olympics in Sochi, Russia. A person familiar with the case tells The Associated Press that Russia’s anti-doping agency could face suspension again based on information indicating data from the Moscow drug-testing lab had been manipulated before being delivered to the World Anti-Doping Agency earlier this year. (AP Photo/David J. Phillip, File)

DOHA, Qatar — The World Anti-Doping Agency is giving Russia three weeks to explain possible signs of tampering with data from its doping laboratory, an accusation which Russian officials fear could lead to a ban from next year’s Olympics.

WADA heard about the possible tampering at its executive committee meeting Monday in Tokyo. Turning over the data was a key requirement for the reinstatement of Russia’s anti-doping agency, and WADA has formally opened a compliance procedure that could lead to a new ban if the data was manipulated.

The computer files were critical to prosecuting cases against athletes alleged to have cheated at the 2014 Olympics and other major events.

He added that if Russia can’t either refute the claim or identify potential suspects, “then the Russian Olympic team’s prospects of taking part in the Games in Tokyo next year could be under threat.”

Russia was already required to send an officially neutral, smaller-than-usual squad of “Olympic Athletes from Russia” to last year’s Winter Olympics as a punishment from the International Olympic Committee for doping offenses. However, the IOC has since signaled that it considers the matter closed.

When asked about the data investigation Tuesday, the IOC said it “fully respects this process” and WADA’s jurisdiction.

The data was handed over to WADA in January after Russia breached an earlier deadline of Dec. 31, 2018. Before then, it was stored in a sealed-off area of the laboratory under the control of Russian law enforcement.

The data has been used to support suspensions against 12 Russian weightlifters, including 10 former world or European championship medalists, and cases in the winter sport of biathlon. WADA said it would continue to pursue cases while this latest review is ongoing.

The International Weightlifting Federation said it will “urgently liaise with WADA” about how to continue its cases.

WADA has been criticized for reinstating RUSADA under terms less stringent than the original roadmap. But director general Olivier Niggli told The Associated Press he stood by the decision.

“I believe it was actually a very important decision and absolutely the right decision,” Niggli said. “I’m convinced that we would not have the data if we had not taken that decision, so we would not even be talking about it today. There would still be a cloud of suspicion and nothing would have gone forward.”

Niggli conceded the tampering could force WADA to drop some of the cases, “but there will be a good number of cases which can still move forward.”

WADA would not set a firm timetable on a decision. The case is heating up a few days before the start of the track world championships in Doha, where 30 Russians will compete as neutral athletes while Russia’s track federation remains under suspension by the sport’s governing body.

Russia’s sports minister Pavel Kolobkov said his office had been told about the discrepancies between the data turned over by a whistleblower and data from the lab, which was being used to corroborate the whistleblower information. He indicated that Russian technical specialists will have access to the review.

“What, exactly, these inconsistencies are and what they are related to, that will be cleared up by experts in the field of digital technology from both sides, who are already cooperating,” Kolobkov said. “From our side, we will continue to offer all possible assistance.”

The Russian track federation said Monday it knows of 14 open investigations against its athletes, including the former Olympic gold medalists Anna Chicherova and Elena Lashmanova. The federation said it found out during failed attempts to secure neutral status, which would have allowed them to compete at the world championships.

Both Chicherova and Lashmanova have already served doping bans for other offenses and would likely have been refused the status regardless.

The head of the U.K. Anti-Doping Agency, which led the overhaul of its Russian counterpart, said the manipulation of data could spark fresh cynicism about whether the country had cleaned up its act.

“Clearly it’s incredibly concerning and incredibly disappointing,” UKAD CEO Nicole Sapstead told the AP. “This is data that should have been made available right from the off, it wasn’t.

“A number of obstacles were placed to avoid that data being obtained. And then when it’s finally obtained and you’re rooting through it and assessing it and assimilating it, you suddenly find that it all doesn’t quite tally.”