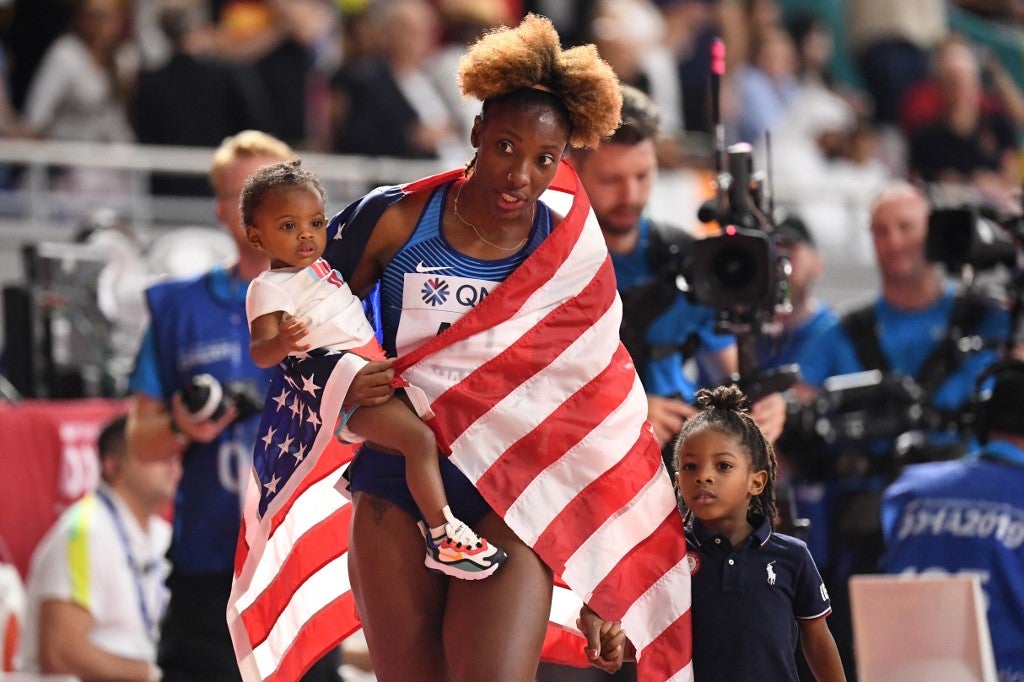 USA’s Nia Ali walks with her children after winning the Women’s 100m Hurdles final at the 2019 IAAF Athletics World Championships at the Khalifa International stadium in Doha on October 6, 2019. (Photo by Jewel SAMAD / AFP)

DOHA, Qatar — It’s no big leap to say Nia Ali had her hands full Sunday night — with one kid in her arms, another on her hip and a gold-medal ceremony on her schedule.

And that was after the race.

The American put an exclamation point on a world championships that any mother could love, adding her name to the list of title-winning moms at these games by pulling an upset in the 100-meter hurdles.

“It’s been such an inspiration to see everyone come together and feed off each other,” Ali said.

Her two kids, 4-year-old son Titus and 16-month-old daughter Yuri, came down from the stands to share the victory lap. With the American flag wrapped around her back, Ali cradled Yuri in her arms while Titus skipped, danced and jumped along the outside of the track.

Such a fitting way to close out a meet, and a year, that has been so much about mothers fighting for equal pay, for better contracts and for more corporate respect on tracks and soccer pitches across the globe.

Just as fitting: Allyson Felix, the American runner who helped spearhead a movement that pushed Nike to reconfigure terms for runners who become pregnant, got a gift gold without even stepping on the track.

The American 4×400 relay team, led by hurdlers Dalilah Muhammad and Sydney McLaughlin, blew out the field for a 2.97-second won over Poland. That meant another gold medal for Felix, who had run in the preliminary heat.

No nation had more golds than the U.S., which tied its championships record with 14.

The U.S. total of 29 (Usain Bolt-less Jamaica was second with 14) was one less than the record it set in London in 2017. It sends the signal that the Americans will have contenders spread throughout Olympic Stadium for the Tokyo Games next year.

It figures many of their most competitive races will be between themselves.

Ali beat out world record holder Keni Harrison to give the U.S. women their second 1-2 finish in the hurdles, two nights after Muhammad set the 400-meter hurdles world record in a close victory over McLaughlin.

But Ali’s win was hard to see coming — for everyone but her, that is.

Harrison is the world record holder, and she has been finishing second most of the year to Danielle Williams of Jamaica. Williams is the world leader who refused to leave the track after false starting in her national championships, but was later given a reprieve, and a spot here, after her federation declared the race null and void.

“Lord knows I’ve been through a lot,” Williams said after she finished third. “I can’t be complaining.”

When Ali crossed the finish line and saw her name come up first next to a personal-best time of 12.34 seconds, she broke into tears. It was her first win in anything resembling a major race since 2016.

“I replayed this race so much in my head, and every time, that’s the way it ended for me,” she said. “So just to see it play out … exactly how I envisioned it, that was my natural reaction.”

With Ali’s event placed on the last day of the championships, she said it’s been nice to sit back and watch all the moms succeeding.

Felix, who became a mother last November, also won gold last weekend in the new event, mixed relay, and now has 13 total — two more than the record she shared with Bolt coming into Doha.

New mom Shelly-Ann Fraser-Pryce of Jamaica has won two golds. China’s Liu Hong picked up a gold in the race walk. Even Alysia Montano, a mother of two who was part of the Nike movement along with Felix, was in town last week to accept two bronze medals reallocated because of doping at the 2011 and 2013 worlds.

Ali hasn’t been as vocal, but she’s been on quite a journey over the past four years nonetheless — one that includes multitudes of trips from home in Florida to training sessions in Germany, and to competitions around the globe. Her boyfriend is Canadian sprinter Andre De Grasse, who is every bit as busy.

Ali told one story about having to break from training in Europe recently so she could head home for a parent-teacher conference for Titus, who is in preschool.

“It was important for me to be there and get a good feel of what he’s going to have to go through this year,” Ali said.

Now, though, it’s time to head back home and get back into the routine.

Show and Tell is every Thursday. If Titus is good on the flight home, Mom might let him bring a gold medal to school.