Column: Freedom of speech has its consequences for NBA 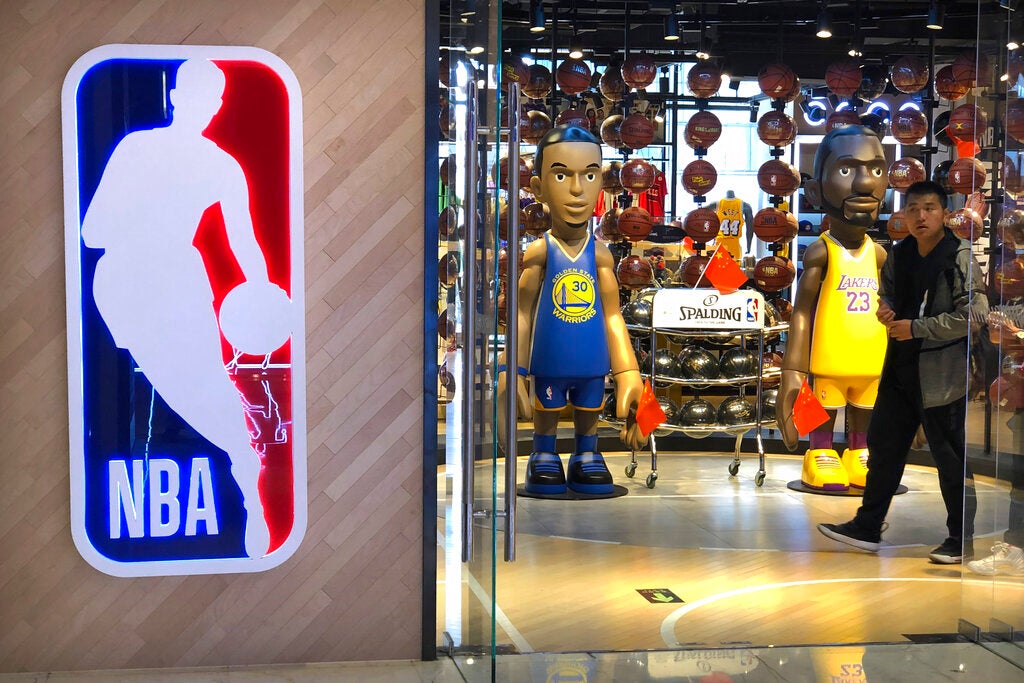 A man walks past statues of NBA players Stephen Curry of the Golden State Warriors, left, and Lebron James of the Los Angeles Lakers holding Chinese flags in the entrance of an NBA merchandise store in Beijing, Tuesday, Oct. 8, 2019. Chinese state broadcaster CCTV announced Tuesday it will no longer air two NBA preseason games set to be played in the country. (AP Photo/Mark Schiefelbein)

If the NBA really wanted to make a statement it should have never issued a statement, much less two.

No need to complicate things when two team owners had already genuflected to the irate citizens of China. Or when James Harden took it upon himself to apologize to an entire nation.

The simple path for the NBA was to do what the creators of the show South Park did this week after finding themselves caught between an authoritarian regime that tolerates no dissent and the pile of cash that doing business in China can bring.

Admit what is really important.

“Like the NBA, we welcome the Chinese censors into our homes and into our hearts,” Trey Parker and Matt Stone said in a statement of their own. “We too love money more than freedom and democracy.”

The South Park creators, of course, make their millions by being funny. And there’s a lot to chuckle about in a post that, among other things, declares that the leader of China doesn’t really look like Winnie the Pooh after all.

There’s nothing funny about this for the NBA.

A league that has painstakingly built a reputation for social awareness for the briefest of moments looked no different than any other corporation chasing money in China. A league that embraces personal freedom seemed unable to understand that freedom means something very different in China.

All this while LeBron James and company were speeding their way toward Shanghai and an exhibition game reception that figures to be very different than they were expecting.

If Commissioner Adam Silver’s tortured response to the crisis facing the league is any indication, even LeBron will have a hard time explaining his way out of this one.

Silver’s first statement expressed regret that the Friday night tweet by Houston Rockets general manager Daryl Morey supporting protesters in Hong Kong had offended the league’s friends and fans in China. That not only didn’t mollify China — which offered a more nationalistic translation for the audience at home — but was attacked on social media as failing to stand up for the right of free speech.

Silver tried again and pretty much got it right. But that meant further antagonizing a country where the NBA has a big investment and is making even bigger profits.

“It is inevitable that people around the world — including from America and China — will have different viewpoints over different issues. It is not the role of the NBA to adjudicate those differences,” Silver said. “However, the NBA will not put itself in a position of regulating what players, employees and team owners say or will not say on these issues. We simply could not operate that way.”

Give Silver credit for standing up for free speech, albeit a bit late. The commissioner quickly realized how off-tone his first response was and did his best to at least make it sound better.

Unfortunately for the NBA, though, it’s in a lose-lose situation in a country that seems to be aching for a fight.

Workers at a Shanghai gym were seen in a video painting over the Houston Rockets logo, and the team’s merchandise has disappeared from stores. State broadcaster CCTV cancelled its planned airing of two games between the Los Angeles Lakers and Brooklyn Nets in China, while the streaming service Tencent — which recently signed a five-year, $1.5 billion deal for NBA rights — said it would not show Rockets games.

Deals that individual players like James have in China could be in jeopardy, too. And any dream of the NBA one day introducing the Beijing Pandas as its newest expansion team will remain a dream.

All because of a tweet supporting protesters in Hong Kong, who want nothing more than the same personal liberties that every NBA player and employee enjoy. A tweet that may soon end Morey’s employment much the way kneeling during the national anthem ended Colin Kaepernick’s time in the NFL.

Freedom of speech does have its consequences. There’s a price paid for speaking out, as Kaepernick found out and as Muhammad Ali did a half century before him.

But the price paid for backing down on values of a league that has led the way on social issues would be even worse. That’s why it was critical that while Silver said Tuesday in Tokyo that he was sympathetic to the outrage, the league will stick by its principles of free speech.

Yes, there’s a chance the Chinese money may be gone. The exposure carefully cultivated over three decades, too.

But Silver had to take a stand for a right held dear by most Americans. He had no other alternative if he and the league wanted to keep their credibility and self-respect.

At least no alternative as funny as that suggested by South Park’s creators after the show seemed to vanish in the Chinese media following an episode in which Pooh and Piglet are jailed in China and mistreated after memes comparing Chinese leader Xi Jinping to Pooh circulated online.

“Long live the Great Communist Party of China!” the show’s creators tweeted. “May this autumn’s sorghum harvest be bountiful! We good now China?”