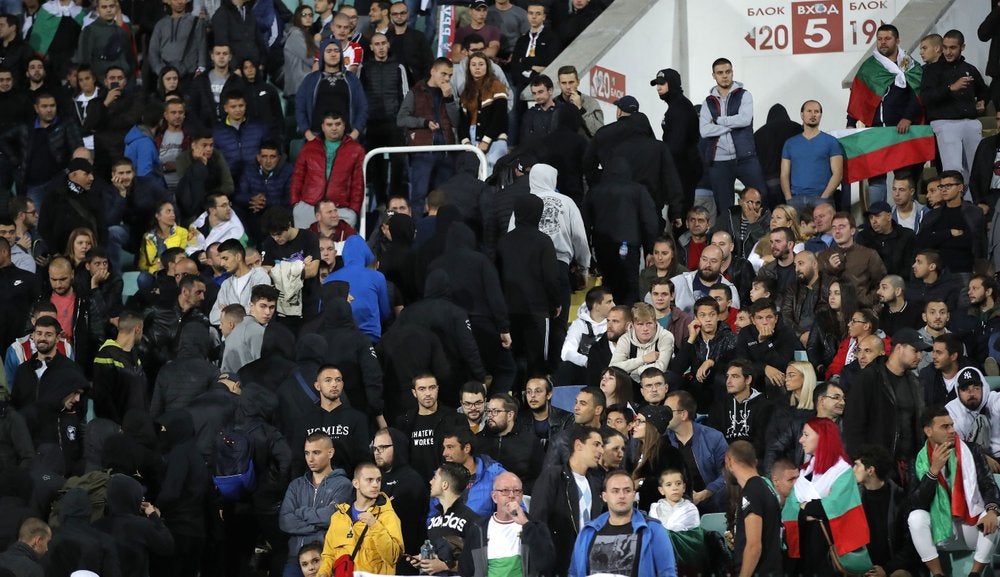 SOFIA, Bulgaria — England’s Football Association called on UEFA to take “very stringent” action after the country’s European Championship qualifier against Bulgaria was stopped twice in the first half because of racist chants and Nazi salutes from the home supporters.

England’s 6-0 win was halted in the 28th minute and again in the 43rd, but the English players opted against leaving the pitch and the game was quickly resumed after both breaks.

Bulgaria supporters in the crowd were seen directing monkey chants at England players, doing Nazi salutes and holding up shirts with the UEFA logo and the text “No Respect” — a reference to the European governing body’s “Respect” campaign aimed at curbing racism in the sport.

During the first break, the public announcer warned that the match could be called off completely unless the racist abuse stopped — the first step in UEFA’s anti-racism protocol for games. During the second break, dozens of Bulgaria fans involved in the chanting, many of them wearing dark hoodies, left the stadium.

“I would like to see a very stringent review by UEFA because I know they take racism very seriously,” English FA Chairman Greg Clarke said. “We should join a movement to drive racism out of our game and have zero tolerance for it.”

The FA also issued a statement saying the England players “were subjected to abhorrent racist chanting,” which seemed to be aimed mainly at black players like Raheem Sterling and Tyrone Mings.

“As we are sadly aware, this is not the first time our players have been subjected to this level of abuse and there is no place for this kind of behavior in society, let alone in football. We will be asking UEFA to investigate as a matter of urgency,” the FA said.

Mings initially asked one of the assistant referees if he had heard the chants and England coach Gareth Southgate then held a discussion with the fourth official before the game was halted for the first time.

“It was quite clear to hear on the pitch, but we showed a great response, we showed a good togetherness and ultimately we let the football do the talking,” Mings told ITV. “We made a decision at halftime to come out and play the game which we thought was the right decision and if anything else had happened we would have taken appropriate action.”

The delays led to six minutes of added time, during which Sterling tapped in England’s fourth goal.

Bulgaria captain Ivelin Popov appeared to have a heated debate with a section of home fans, asking them to stop the chants, as the rest of the players went to the dressing rooms at half time.

The second half passed without interruption, with Sterling scoring his second goal with a precise finish in the 69th, and Kane completing the rout in the 85th, shortly after he was denied by the post.

The Vasil Levski Stadium in Sofia was already subject to a partial closure for the match after Bulgaria was sanctioned for racist chanting during qualifiers against Kosovo and the Czech Republic.

“We have made two statements by winning the game but also we have raised the awareness of everyone of the situation,” Southgate said. “The game was stopped twice. I know for some people that won’t be enough.”