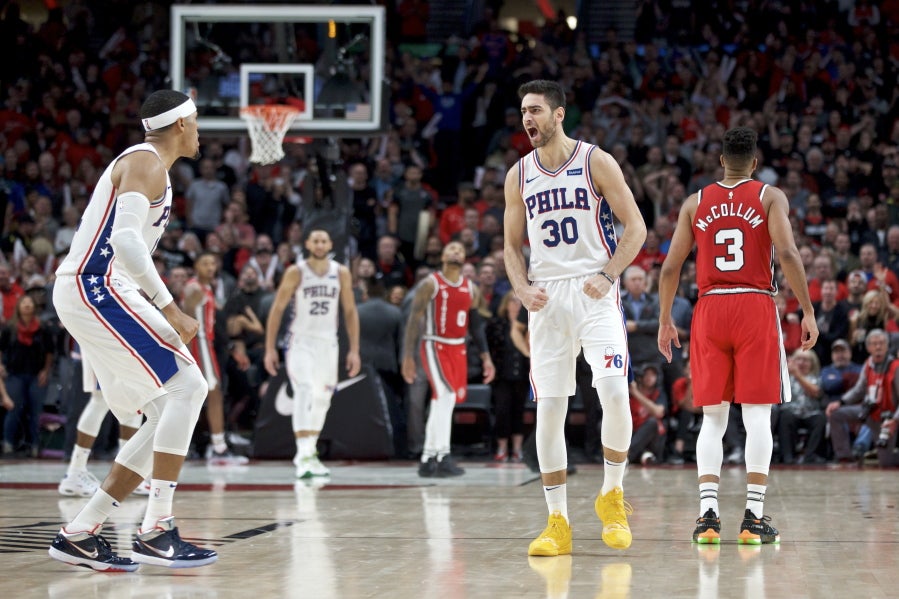 Furkan Korkmaz drained a three pointer with less than a second on the clock as the Philadelphia 76ers rallied late to edge Portland 129-128 and remain the only unbeaten team in the new NBA season.

The 76ers are the last undefeated team in the league, going 5-0 to start the season for the first time since 2000-01.

Anfernee Simons made a corner three-pointer with two seconds left to put the Trail Blazers in front but the Sixers got the ball back after a timeout. That set the stage for Korkmaz’s heroics as the Turkish shooting guard nailed a falling-down, 24-footer for the win.

“I didn’t know how to feel or how to act. It was the biggest shot of my career,” he said. “We were working on that in practice. I knew that if I was open I would take the shot”.

The 76ers were playing without star Joel Embiid who was serving the first game of a two-game ban for fighting.

The Blazers led by as many as 21 points in the third quarter but the Sixers closed the gap to 103-100 with just over 10 minutes left. Damian Lillard’s three-pointer with five minutes to go put Portland up 121-113 but the Sixers wouldn’t go away.

Lillard had 33 points, including eight of Portland’s 19 three pointers.

Elsewhere, Giannis Antetokounmpo flirted with a triple double as the Milwaukee Bucks beat the defending champion Toronto Raptors 115-105 in the first meeting between the clubs since last season’s Eastern Conference finals.

Antetokounmpo scored 36 points, grabbed 15 rebounds and added eight assists for the Bucks, who built up a 26 point lead then held on for the victory.

Eric Bledsoe added 14 points and nine rebounds for the Bucks, while Khris Middleton and Brook Lopez each had 11 points.

Kyle Lowry led Toronto with 36 points and Pascal Siakam had 16 points before fouling out late in the fourth quarter.

The Raptors rallied in the fourth by cutting the lead to just four points but couldn’t win on the road.

Also, Andrew Drummond finished with at least 20 points and 20 rebounds for the third consecutive game as the Detroit Pistons held on to beat the Brooklyn Nets 113-109.

Drummond had 25 points to go with his 20 rebounds for the Pistons, who were playing their second game in as many nights.

He added six assists and five blocks to go 20-20 for the fourth time in seven games.

Bruce Brown added career highs of 22 points and seven assists, and Luke Kennard finished with 24 points and helped seal the win with a driving basket and two free throws in the final 30 seconds.

The game was a series of runs by both teams with the Pistons taking a 14 point lead at one stage of the third after the Nets outscored Detroit by 15 in the second quarter.

Spencer Dinwiddie hit a free throw with seven seconds remaining, and Drummond did the same with six seconds left to put the Pistons up 111-108.

Prince then split a pair, missing the second on purpose, and Drummond grabbed the rebound and made a pair with three seconds left to clinch the victory.

Eric Paschall had a season-high 25 points for Golden State while starting in place of injured Draymond Green.

Green suffered a torn ligament in his left index finger on Friday, joining a long list of injured Warriors including Stephen Curry, who underwent hand surgery this week and will be out for three months.