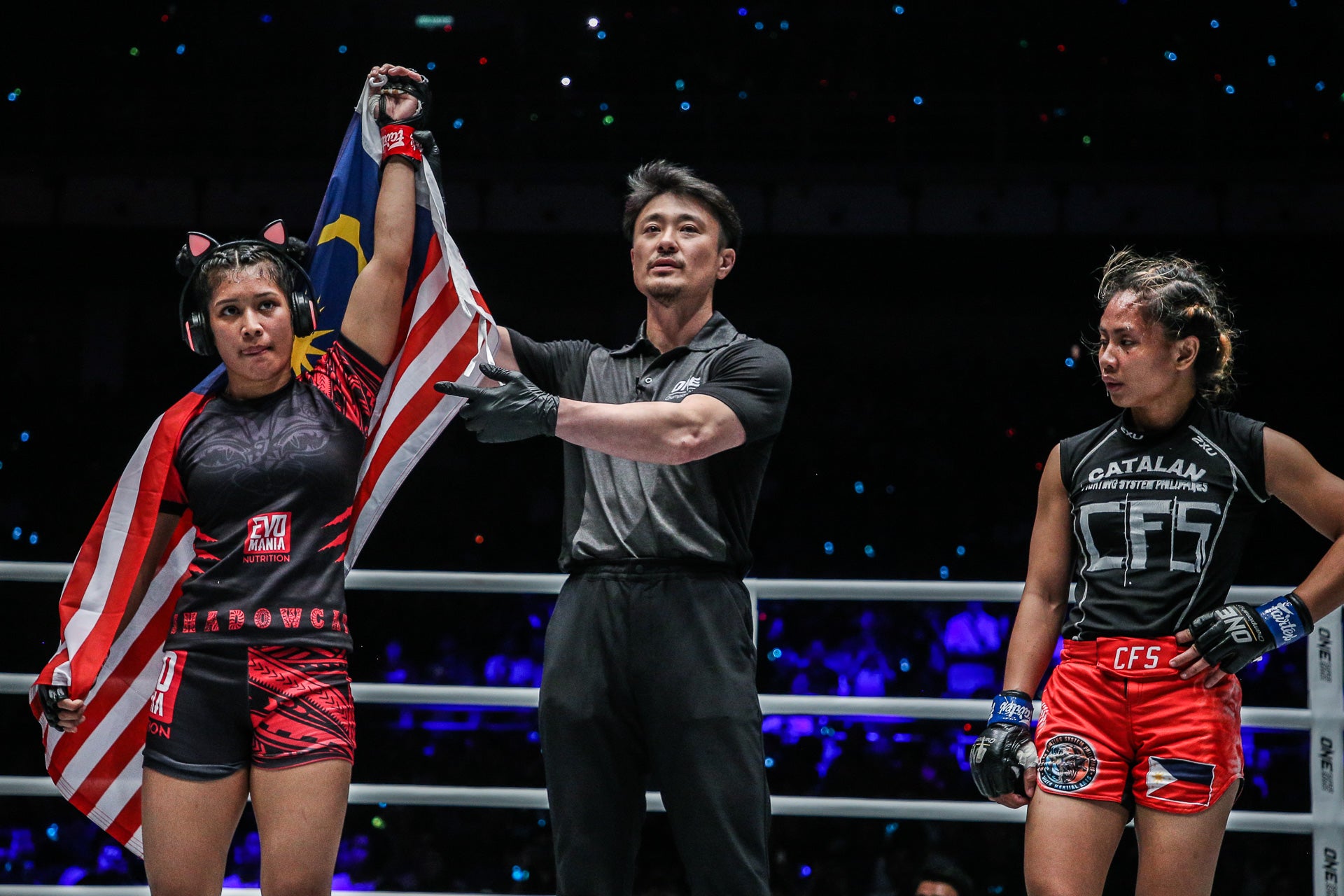 FILE – Malaysia’s Jihin Radzuan, left, wins after submitting the Philippines’ Jomary Torres in ONE: Masters of Destiny. Another Filipino in Denice Zamboanga gets a crack at Radzuan when she makes her ONE Championship debut in ONE: Mark of Greatness on Dec. 6 in Kuala Lumpur, Malaysia. Photo from ONE Championship

Denice Zamboanga wants nothing less than a memorable ONE Championship debut and she knows there’s no better way to accomplish that than by spoiling a hometown hero’s parade.

The unbeaten Filipina hopes to leave a good first impression when she battles Malaysia’s pride Jihin Radzuan on Dec. 6 at Axiata Arena in Kuala Lumpur, Malaysia.

Zamboanga is aware it will not be an easy maiden stint being up against Radzuan, who many people believe is the future of Malaysian mixed martial arts.

“She’s well rounded, so I need to be careful with her striking and ground game. I don’t see any weaknesses from her, except for her wrestling. I guess my wrestling is better than hers,” Zamboanga said.

“I know she’s a strong fighter and she’s also hungry to end [the year] with a win, but I will do everything so I can keep up with whatever she’ll throw in our fight.”

Zamboanga has won all five of her matches, four of which ended early. Radzuan, on the other hand, has beaten some of the most notable names in the atomweight division – Priscilla Hertati Lumban Gaol and Jenny Huang.

Despite facing a tough foe, the Team Fairtex representative is out to make the most out of this opportunity.

“I don’t have any plans of wasting this magnificent opportunity ONE Championship has given me,” Zamboanga said.

“This match is for everyone who believes in me. I dedicate this to God, family, friends, and supporters.”

With her first ONE appearance right around the corner, Zamboanga looks forward to making an unforgettable mark in the largest martial arts organization in the world.

“[I am] really grateful to be part of the best organization in the world. I’m very excited to represent my own country. This is a big opportunity for me, fighting against a top contender in my division, especially [in] my debut fight,” the 5-0 athlete said.

“I’m working very hard for this fight. I want to start my ONE Championship journey with a win.”