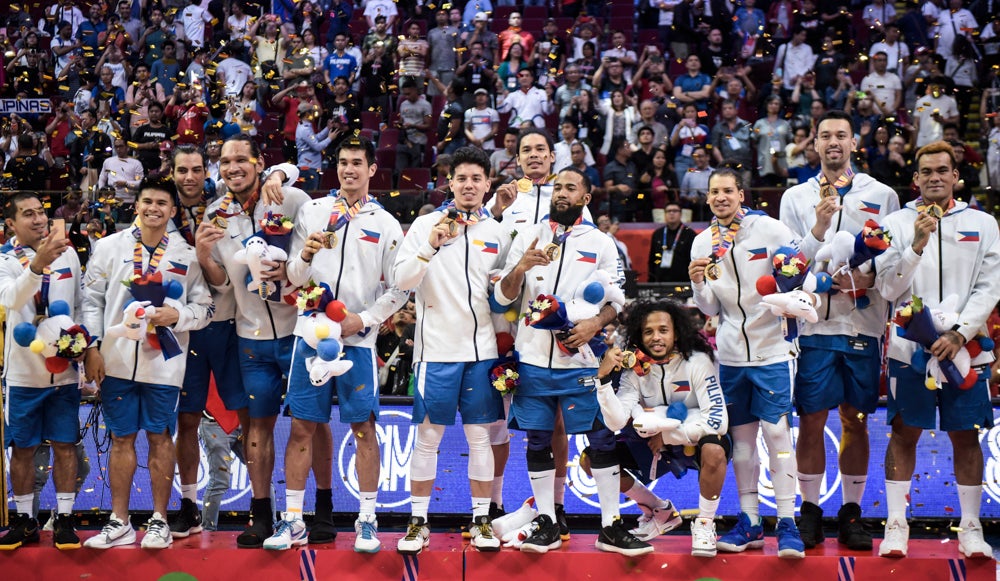 MANILA, Philippines —  Thailand coach Chris Daleo looked at his bench and shook his head in disbelief as Gilas Pilipinas had one of its stretches where it could do no wrong.

To no one’s surprise, the Philippines went on another clinical third quarter on its way to the gold medal after walloping Thailand, 115-81, in the 30th Southeast Asian Games.

“It’s just a real honor to be around these guys. Amazing to be around Chris Ross, June Mar (Fajardo), Christian (Standhardinger), watching these guys play. I was always on the other side,” national team head coach Tim Cone said.

“Years ago I coached the centennial team, I always waited for my chance to really work for the gold. This is so special to me, to come back and coach the national team for a short time. It’s been truly special. I never had a gold,” added Cone.

Cone wasn’t the only member of the team who had never won a SEA Games gold medal with eight of his players also claiming their first before a mammoth hometown crowd at Mall of Asia Arena.

Picking up where their female counterparts, who won their breakthrough basketball gold earlier, left off, the Filipinos extended their reign in the region with their 13th consecutive men’s basketball title.

Just like when it manhandled Indonesia in the semifinal, the Philippines took Thailand’s best punch and rolled with it before unleashing a flurry of its own in the third period.

Facing little resistance against a much smaller Thailand frontline, Fajardo easily came away with 17 points and 13 rebounds while Wright continued his hot shooting with 14 points on 4-of-7 shooting from the field.

Ross, whose defensive intensity set the tone for his team throughout the tournament, only had eight points but he kept Gilas’ engine running like a well-oiled machine, setting his teammates up to finish with eight assists.

Thai-American Tyler Lamb led all scorers with 33 points but failed to draw enough help from his teammates.