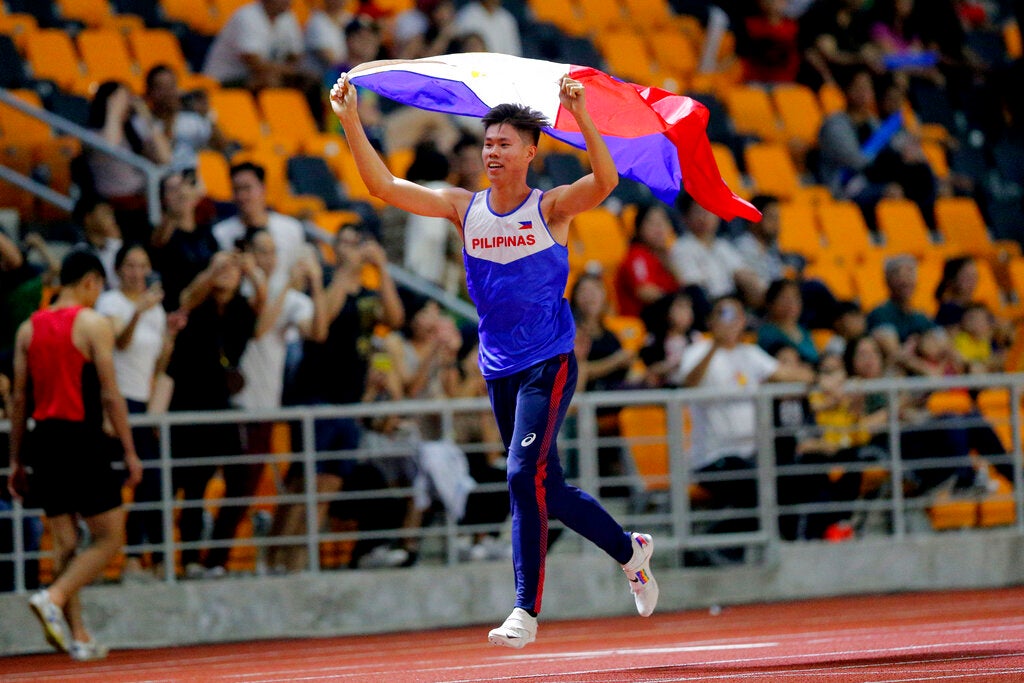 Philippine’s, Obiena Ernest celebrates with his national flag after winning in the men’s pole vault final during the athletics competition at the 30th Southeast Asian Games at Athletics Stadium. (AP Photo/Tatan Syuflana)

MANILA, Philippines — There was no stopping the Philippine juggernaut in the 30th Southeast Asian Games.

The Philippine delegation got off to a scorching start with 23 gold medals in just the first day of competitions and never hit the brakes on its way to the overall title with 149 gold medals.

By Day 3, the Filipinos had already surpassed their tally from the 2017 Games.

Filipino arnis athletes, who copped a total of 20 medals, delivered the most golds for the Philippines with 14 while athletics produced the most wins with 27 medals, 11 of which were gold.

The Filipino jins also netted an impressive medal haul with eight gold, nine silver and four bronze medals as they more than doubled their previous output in 2017 in Malaysia.

History was also made in this year’s regional meet after the Philippine women’s basketball team won its first ever gold medal, allowing the Filipinos to sweep all four basketball events which included 3×3 men’s and women’s competitions.

Swimming also ended a 10-year gold medal drought thanks to James Depairine, who accounted for the sport’s lone gold in the meet.

Carlos Yulo was the Philippines’ most bemedaled athlete for the Games with a haul of two golds and five silvers in seven gymnastics events.

It marked the first time since 2005, where the Games were also hosted here, that the Philippines clinched the overall championship with 113 gold, 85  silver and 93 bronze medals.

All in all, the Philippines, which also drew 10 golds from dancesport and seven from wushu, won 387 medals including 117 silver and 121 bronze.

Second place Vietnam didn’t even come close with 98 golds. Thailand came in third with 92 golds while Indonesia, which started in second, slipped to fourth with 72 golds.