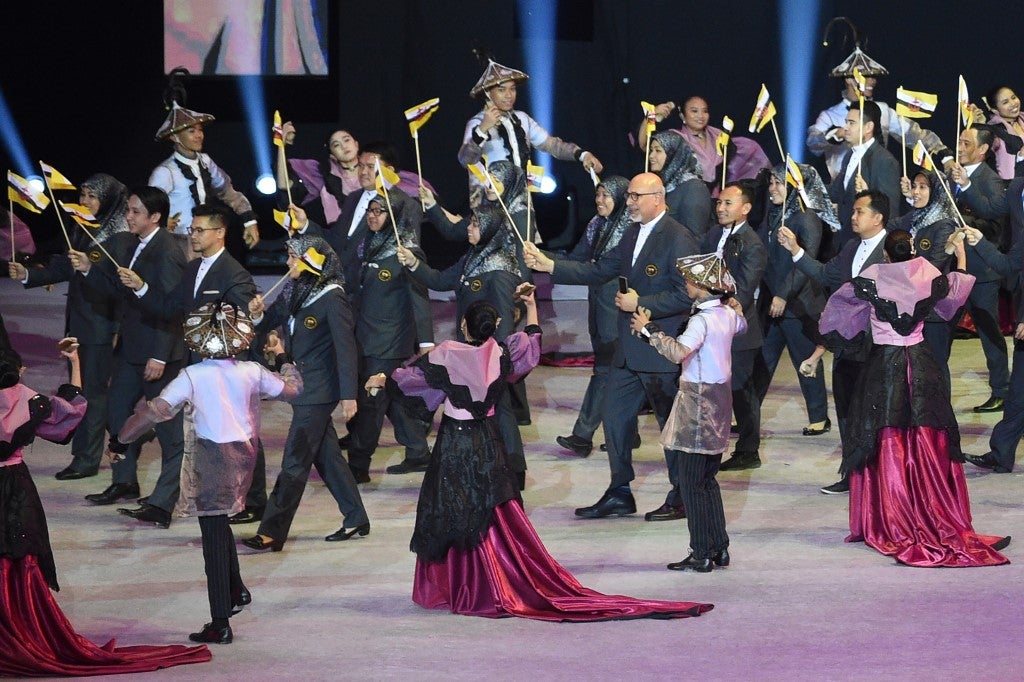 Athletes and officials from Brunei march during the opening ceremony of the SEA Games (Southeast Asian Games) at the Philippine Arena in Bocaue, Bulacan province, north of Manila on November 30, 2019. (Photo by TED ALJIBE / AFP)

The Brunei Darussalam contingent that embarked on a sporting mission at the 30th Southeast Asian Games in Manila,  became the most successful team ever assembled in an away SEA Games since making their debut in 1977.

The national contingent entered unchartered territory after they managed a haul of two gold, five silver and six bronze, reaching greater heights than their predecessors before them.

Brunei Darussalam captured its second gold medal in this year’s edition through polo, making it the first time that the country’s athletes stood on the top of the podium on a foreign soil more than once.

The national contingent bagged a record of four gold medals, 12 silver and 32 bronze in 1999 but they were the hosts of the biennial meet that year, which remained to be their most successful appearance.

His Royal Highness Prince Haji Jefri Bolkiah brought home gold as part of Brunei’s polo team that made sporting history with a 7-4 win over Malaysia in the 0-2 low goal final.

With two gold, five silver and six bronze under their belt, the class of 2019 eclipsed a longstanding record which stood for 32 years when they amassed one gold, six silver and 18 bronze in the 1987 SEA Games in Jakarta.

Running out of sports to be in a medal-winning position, Brunei was seemingly poised to end the tournament as the second most successful team with the 1987 team’s record held intact.

Brunei’s most recent contingent surpassed the feats of the 2005 team that collected one gold and four silver in Manila when the wushu pair of Majdurano Joel Majallah Sain and Mohammad Safiee Shayferan bin Roslan won the country’s fourth silver medal.

The label of the second best team in SEA Games history was made possible having acquired bronze medals, prompting the other participating sports to step up their interest of overhauling the accomplishments of the 1987 team.

Wushu contributed to the medal rush with one gold, three silver and two bronze, winning a medal in six of the seven categories contested.

Philippines 2019 will be remembered as one of the most successful sporting stories the country has witnessed with athletes grabbing a piece of the metal in their maiden appearance.

One of the standout performers was Brunei’s latest pencak silat star Anisah Najihah binti Abdullah who bagged bronze in the women’s artistic singles in her debut appearance.

Two of the Roslan siblings rose to prominence with Muhammad Adi Salihin cementing his place among the country’s sporting greats with gold in the combined nandao and nangun events while younger brother Mohammad Safiee won silver in his debut appearance.

Besides wushu (two), netball, pencak silat and polo, the other bronze medal came in karate.

Health workers make up 7% of COVID-19 cases in PH