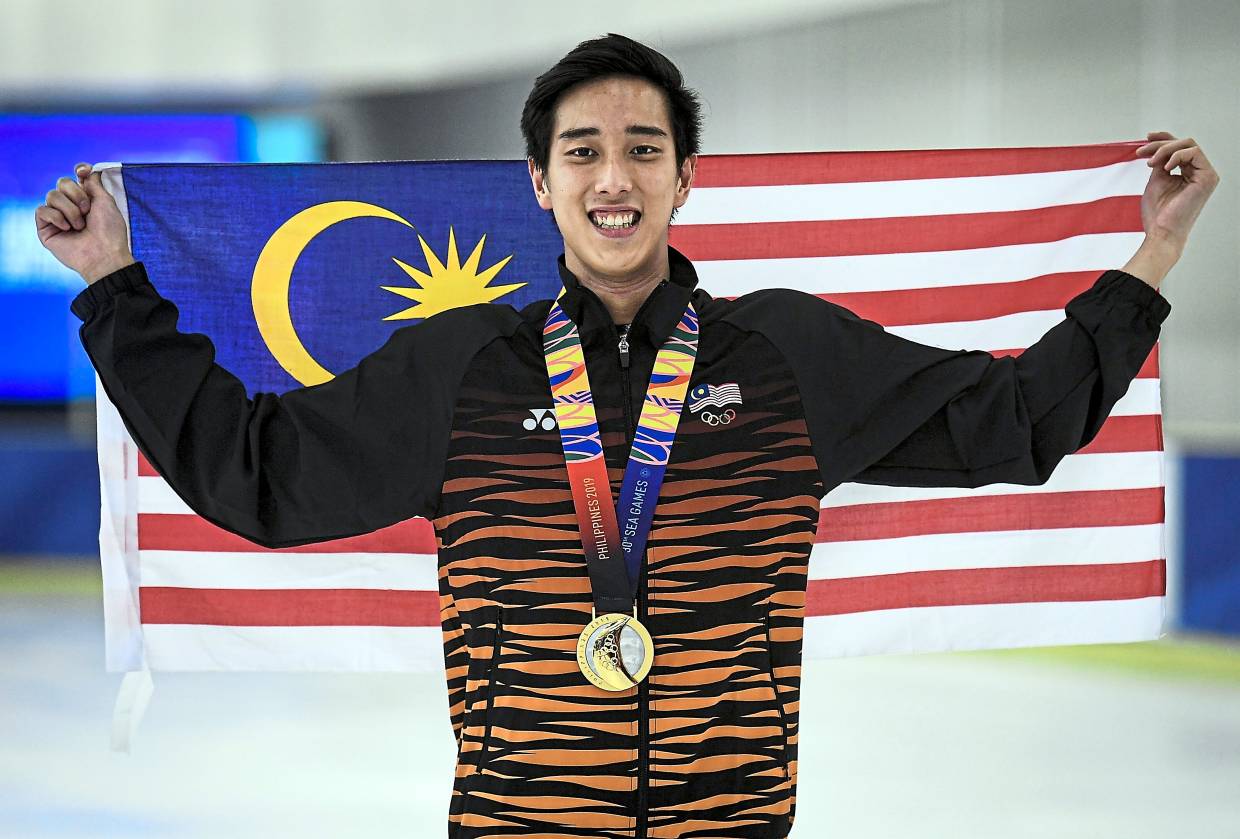 Malaysian figure skater Julian Yee were among the winners for his country in the 30th Southeast Asian Games. Photo via The Star My

FAIL. That’s the verdict on Malaysia after the contingent missed out by a mile the target of reach 70 gold medals set by the National Sports Council (NSC) and Olympic Council of Malaysia (OCM).

Malaysia will return home with 56 golds, 57 silvers and 71 bronzes as the fifth overall team at the end of a challenging Philippines SEA Games yesterday.

That’s 14 golds off of the target, almost a quarter short.

Youth and Sports Minister Syed Saddiq Syed Abdul Rahman had announced a target to secure 70 golds, 51 silvers and 105 bronzes during the flag handing ceremony on Nov 21 and the idea was to see Malaysia placed fourth overall which achieving their best ever finish in a SEA Games outside home.

The previous best finish for a SEA Games held outside Malaysia was in Thailand, 2007, when the contingent returned home with 68 gold medals.

Chef de mission Datuk Megat Zulkarnain Omardin was resigned to the failure. He said the management would accept the responsibility and he did not want the blame the athletes or coaches.

“We identified at this early stage a few contributing factors to this overall performance.

“There was overconfidence in some sports because we arrived in the Philippines as the overall defending champions.

“We won big in sports like archery, sailing and bowling in the last few SEA Games and we were too confident of repeating the success.

“There were also some sports being contested in Philippines for the first time and we had no background. We were given an assurance that we could win two golds in obstacle sports but we missed totally. “This SEA Games was a really big challenge. I have been involved in eight to nine SEA Games but never faced this kind of situation where the management had to be divided into three main clusters – in Manila, Clark and Subic.

“The organizers could not get things right at the start and complicating things was the typhoon.

“Many sports schedule were changed and some of our teams almost missed the competition as their flights into Philippines were delayed with the airport in Manila closed.

“We will do a post-mortem to identify the shortcomings in every aspect, ” said Megat.

“We targeted 26 sports to deliver the 70-gold target. But only 18 sports manage to win 50 golds while we got six more from sports we had not targeted in the first place.

“Sports like sailing, archery, ice skating, bowling and obstacle sports failed to achieve what they said they could.

“However, we have to give credit to the sports that shone this time. The gymnastics team won a total of nine golds, the karate team surpassed their target by one despite the absence of Syakilla Salny Jefry Krisnan who pulled out at the last minute, the badminton team who only aimed for one came back with three golds and esports, which is being contested for the first time.“We are optimistic esports can contribute to our gold medal haul if included in future SEA Games, ” said Shapawi.