Amid hotshot passers, old men Brady and Brees roll on 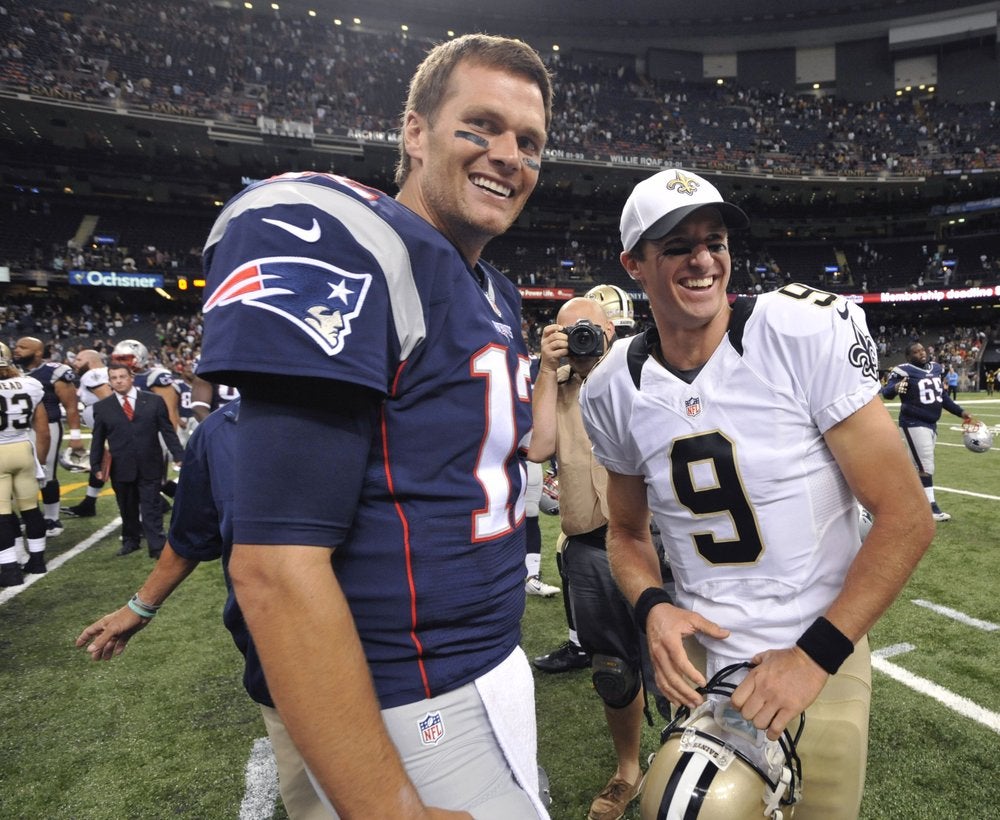 FILE – In this Aug. 22, 2015, file photo, New England Patriots quarterback Tom Brady (12) and New Orleans Saints quarterback Drew Brees (9) greet each other after an NFL preseason football game in New Orleans. Between them, Brady and Brees have played 38 pro football seasons, 39 if you count 2008 when the New England star wrecked his knee in Week 1, and could be doing so against each other on Feb. 2 in a little thing called the Super Bowl. (AP Photo/Bill Feig. File)

Between them, Tom Brady and Drew Brees have played 38 pro football seasons, 39 if you count 2008 when the New England star wrecked his knee in Week 1. Both probably should be long retired and counting the days until their induction into the Pro Football Hall of Fame.

Instead, they’re still slinging away — and could be doing so against each other on Feb. 2 in a little thing called the Super Bowl.

No, 40-year-old quarterbacks should not still be setting NFL records. Yet Brees always seems to be doing so.

And certainly 42-year-old QBs don’t even belong on the field. But Brady has the Patriots in position for — not that most of America wants to read this — a fourth straight trip to the Super Bowl, and his 10th overall, with six wins.

The influx of hotshot arms, from Patrick Mahomes to Lamar Jackson, from Carson Wentz to Deshaun Watson, has captured so much attention through the football galaxy. Still, it’s the two 40-somethings who lord over the quarterbacking universe, possibly for their final seasons.

Adding spice to their continued presence center stage are the stats. Consider the career touchdowns passing mark that Peyton Manning held until Brees broke it in Game 14 for the Saints. He now has 544, beating Brady to the record in part because New Orleans has a more dangerous, dependable and varied attack than does New England these days. Brady is at 539.

While neither passer is a stats freak, they certainly are aware of the numbers they have compiled.

“Obviously, before the season you know you are a certain distance away, but then once the season starts, you just focus on winning games and doing what I need to do as a quarterback of this team to put us in the best position to succeed,” Brees says. “With that, I guess the statistics come, and maybe they add up, and then all of a sudden, you’re close enough to be within striking distance of some of those things.”

With Michael Thomas running routes for him, Brees could always be closing in on unthinkable numbers. Thomas already has broken the single-season record for receptions with 145, and he caught 42 of those from Teddy Bridgewater while Brees was sidelined for five games with a thumb injury.

The presence of Thomas, running back Alvin Kamara, a solid offensive line and coach Sean Payton could be enticing enough for Brees to come back next year. Or he could walk away from the NFL with nothing to prove, particularly if the Saints can win a second NFL title since he ventured to the Big Easy in 2006. That’s certainly doable: If New Orleans beats weak Carolina on Sunday while Green Bay and San Francisco lose, the Saints will be the NFC’s top seed. A simple victory over the Panthers earns a bye.

New Orleans could wind up in an odd position for 2020 at quarterback because Bridgewater will be a high-demand free agent. The Saints would love to hang on to the 27-year-old Bridgewater, who went 5-0 replacing Brees. But at what price if Brees is still around?

New England has similar questions to answer, and they will magnify after the playoffs. Brady has had an inconsistent season with little established talent around him. His only dependable veteran target is Julian Edelman, and the protection has been spotty at best. Unlike Brees, who still has the mobility to make plays outside the pocket, Brady is pretty much stationary.

He’s also perhaps the greatest pocket passer ever. Surely, the fiery, often combative (on the field) Brady is the most accomplished quarterback with his six rings. To ever dismiss him is foolish, and the Patriots are 12-3, just like the Saints.

But there are more negative vibes around Brady than ever. His passer rating could wind up his lowest since 2003. His contract ends after this season. There have been rumblings he wants out of New England, whether by retirement or, if you can imagine, by joining another club as a free agent.

Brady notes that there really is not a status quo in sports — not even for a quarterback with nearly two full decades of play on his resume.

“Yeah, there’s a lot of new pieces and you’re always trying to incorporate from week to week,” Brady says. “And every year, it’s a little bit different, the challenges are different. You just can’t rely on, ‘Oh well, we’ll just do exactly what we used to do,’ or, `We’ll do exactly what we did last week.′ You have to kind of reinvent yourself every week. How the game plan takes shape and what guys are asked to do in order to execute takes shape.

“It’s always a little bit of a challenge, but football season is not supposed to be easy. It’s a hard grind for us. … We’re in the middle of it, we’re deep into it and just got to have the mental toughness and the competitive stamina to keep showing up every day and working as hard as you can to be ready to compete when we’re called upon.″

That’s something Brady and Brees always have been able to do. Entering their 40s has had no effect. The same might be true when they are 50.