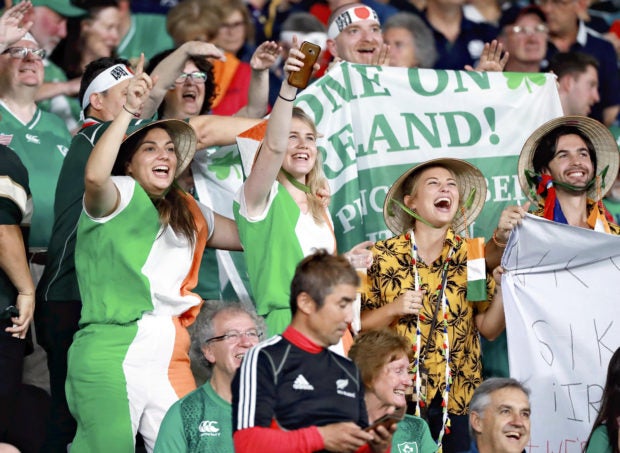 TOKYO — The number of tourists to Japan from countries that participated in the 2019 Rugby World Cup increased by 29.4% in September and October compared with the same period last year, the Japan National Tourism Organisation announced recently.

According to the organization, there were 764,100 visitors from all participating countries during the two months, up by about 170,000 from the same period last year. Also, the number of tourists from each of the countries increased from last year. But at the same time, the total number of all foreign tourists declined by 0.6% in the two months due to a sharp fall in South Korean tourists amid that country’s deteriorated ties with Japan.

There was evidence of the growth phenomenon continuing beyond the World Cup, with the number of British tourists increasing by 37.5% year on year in November. At the World Cup, four teams — England, Wales, Scotland and Ireland — were from the British Isles. The first three represented parts of Britain, while the Ireland team represented both the Republic of Ireland and British Northern Ireland.

According to a rough estimate, more than 70% of tourists were visiting Japan for the first time, and most tourists stayed for two weeks or more. The World Cup was held from Sept. 20 to Nov. 2 at 12 venues around Japan.

A survey of host cities conducted by the organization after the World Cup found that foreign tourists tended to spend significantly on watching the games and on nightlife experiences, while their accommodation expenses seemed to be relatively low.

Restaurants and bars such as pubs were thriving in the host cities and the tourist information centers received many inquiries about places where foreign tourists could drink beer or watch TV.

It was noted that some visitors traveled widely in Japan, such as on a tour from Kyushu to Osaka. High interest in natural scenery and natural experiences such as trekking was also confirmed.

Things that impressed foreign tourists included the kindness of Japanese people, cheap but delicious food, and maps of restaurant locations in multiple languages.

Things that tourists said they wanted more of included high-quality souvenirs (even if they were expensive), restaurants to remain open late at night, and one-day programs in which tourists could communicate with local Japanese.

“We need to leverage the success at the Rugby World Cup for the 2020 Tokyo Olympics and Paralympics,” said Tadashi Kaneko, executive vice president of the organization, at a press conference on Wednesday in Shinjuku Ward, Tokyo.