‘Not easy’: Rafael Nadal gets 2020 season underway with a win 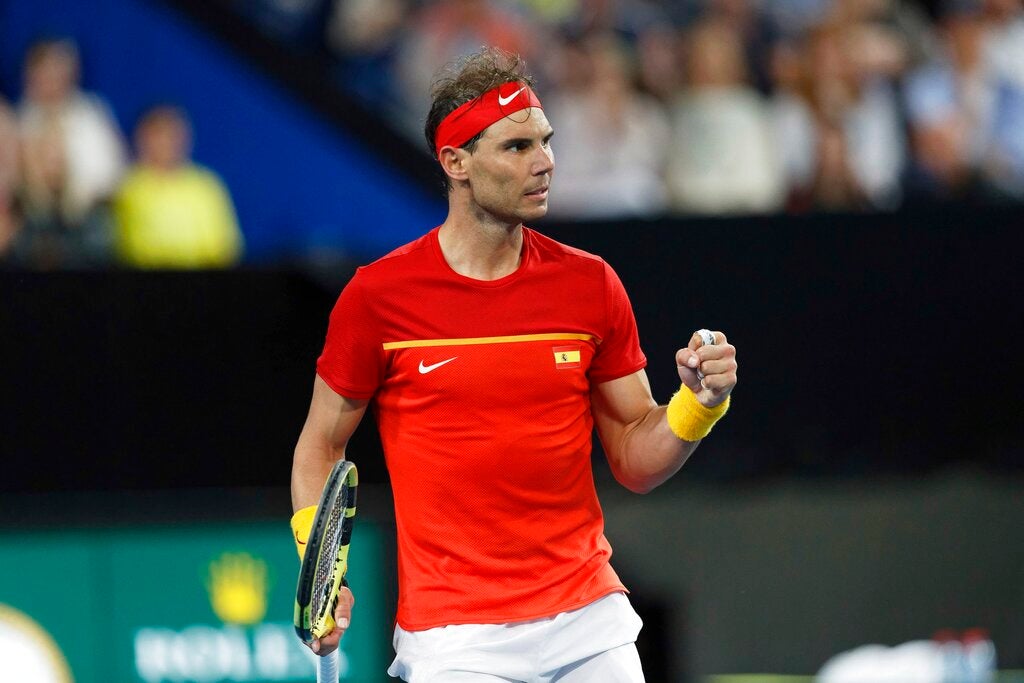 World number one Rafael Nadal overcame sluggish serving to start his season with a 6-3, 7-5 victory over Nikoloz Basilashvili on the second day of the inaugural ATP Cup on Saturday.

Nadal was made to work in the contest lasting one hour and 49 minutes, his first of the season as he eyes equalling Roger Federer’s record Grand Slam tally — of 20 titles — at the Australian Open late this month.

“It was a tough first match-up of the season. It was not an easy start,” Nadal said. “I had some mistakes but was able to close it out.”

It was his first match since he spearheaded Spain’s Davis Cup title on home soil alongside Bautista Agut in November.

“We had great experiences playing on the team and representing our country and here we are again. We want to try our best,” he said.

Nadal started slowly against Basilashvili and was broken in the opening game to quieten the near capacity crowd in his first-ever match in Perth.

But he bounced back immediately and gained the break with a sizzling winner down the line.

World number 26 Basilashvili, who had been soundly beaten by Nadal twice previously, was undaunted and impressively countered on the baseline to stay in the contest.

Nadal, however, made his move with a break in the eighth game to gain control and draw first blood shortly after.

In the earlier match, Bautista Agut expectedly crushed world number 679 Metreveli, who was playing his first match on the ATP Tour.

Metreveli, 26, started enterprisingly and had a golden opportunity to get on the board early but lost a marathon 15-minute second game on serve. It was one way traffic from there as Bautista Agut took command with pinpoint groundstrokes to rattle his inconsistent opponent.

“I asked players who knew him for information because I had never seen him play,” Bautista Agut said. “I was focusing on my game and I played a great match.”

Nishioka put on a masterclass over a dispirited Cuevas, but was helped by his lackluster opponent who did not hit a winner during a grim first set.

The left-handed Nishioka caused the world number 45 problems and clinched the tie after Go Soeda put Japan ahead with a comfortable 6-1, 6-3 victory over Martin Cuevas, Pablo’s younger brother.

Soeda had replaced world number 13 Kei Nishikori, who withdrew from the tournament and the Australian Open with an elbow injury.

Read Next
No distractions for Raymond Almazan as PBA Finals set to begin
EDITORS' PICK
New virus has infected more than 77,000 people globally
Mallorca City: Home of Cavite’s finest industrial hub
US intel officials say Russia boosting Trump candidacy
Filipino among new cases of COVID-19 in UAE
The fight of the decade: The Gypsy King vs The Bronze Bomber
Baldwin sees less reliance on PBA in Gilas’ future
MOST READ
‘AshMatt’ nuptials: ‘Divine knowledge’ leads to blotter entry
LOOK: Heart Evangelista wears ‘Quiapo headband’ at Paris Fashion Week
Mark Bautista on love: ‘She has to be understanding of my situation, that I’m bisexual’
Lacson, Honasan get awards at PMA alumni homecoming
Don't miss out on the latest news and information.