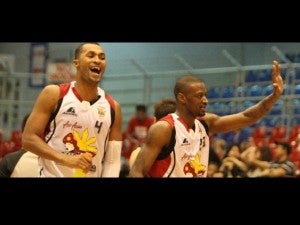 Making up for his one-game absence, Anthony Johnson came back with a 34-point explosion and rallied the AirAsia Philippine Patriots past the Westports Malaysia Dragons, 90-87, Saturday at the Maba Stadium in Kuala Lumpur.

Johnson dropped his personal season-best after a one-game suspension to lead the Patriots to a thrilling comeback where they fell back by as many as 16 points, 49-65, in the second half.

Nakiea Miller and Bogs Raymundo, the top local performer in the game,  also came through in the final six minutes as the Patriots kept the solo lead with a 10-2 record.

“I’m proud of the boys because even if we were facing a 16-point [deficit] on the road, they found a way to catch up,” said Patriots coach Glenn Capacio.

Miller fired 19 points, the last two on clutch free throws with 10 seconds left, on top of 14 rebounds and four blocks.

Raymundo—who just like Miller suited up as an import for the Dragons last season—also shone in the end game to finish with 12 markers and six boards.

The Beermen vie for a repeat of their first-round mauling of the Cobras, 94-59, with Aries Dimaunahan and Junjun Cabatu back from a one-game suspension.