Minus Embiid and Simmons, Tobias Harris leads 76ers past Knicks 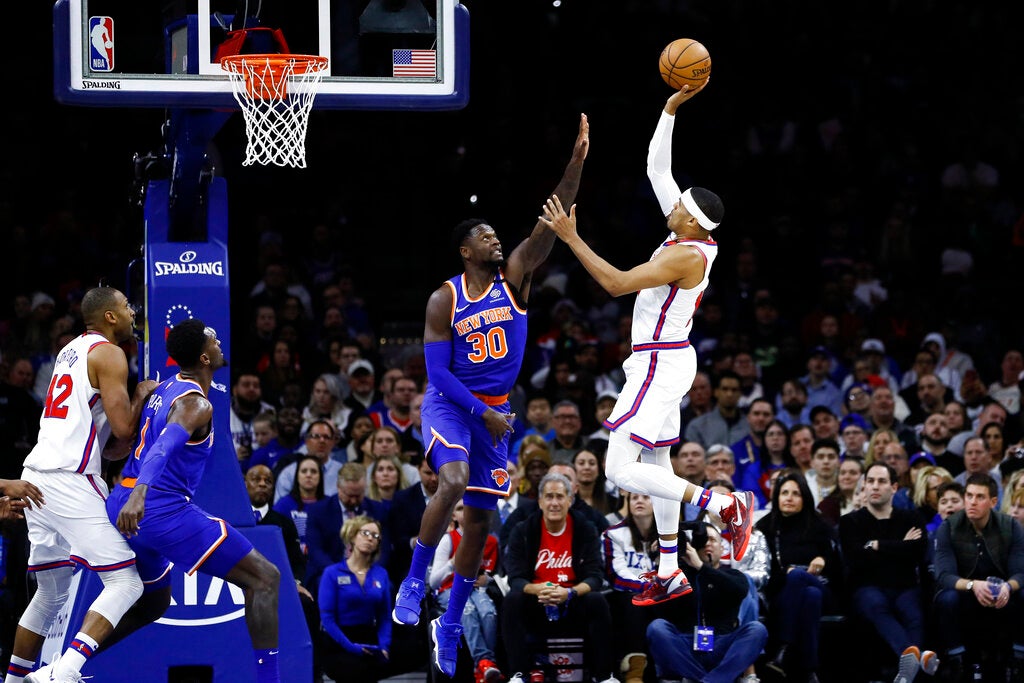 Philadelphia 76ers’ Tobias Harris, right, goes up for a shot against New York Knicks’ Julius Randle during the first half of an NBA basketball game, Thursday, Feb. 27, 2020, in Philadelphia. (AP Photo/Matt Slocum)

PHILADELPHIA — Tobias Harris’ performance had the 76ers feeling good during the game, and the doctor’s report on Joel Embiid afterward had them feeling even better.

Harris scored 34 points to lead short-handed Philadelphia to a 115-106 victory over the New York Knicks on Thursday night.

The 76ers played without injured All-Stars Embiid and Ben Simmons.

Embiid was hurt in Wednesday night’s loss at Cleveland when he collided with Ante Zizic. After Thursday’s victory, the 76ers learned that their star center didn’t have any structural damage. He has a sprained left shoulder and will be re-evaluated in about a week.

Before the game, Brown discussed playing without Embiid and Simmons.

“It’s a painfully obvious bind,” Brown said. “We’re missing two All-Stars. You yank that from the team and it’s painful.”

The duo’s absence didn’t hurt against the woeful Knicks.

Shake Milton scored 19 points and Al Horford added 15 for the 76ers, who improved to their NBA-best home record to 28-2.

Harris signed a five-year, $180 million deal in the offseason. He usually takes a back seat offensively to Embiid or Simmons, but Philadelphia needed him to be the go-to player against New York.

“Just taking the opportunities that were presented,” said Harris, who added seven rebounds and seven assists. “We had a good pop to our offense and I was able to get in-the-flow plays.”

“Bottom line, we have to do a better job (defensively),” Knicks coach Mike Miller said. “Tonight it was the second quarter. I like the way we played in the second half.”

The Knicks were within 107-102 with 2:08 left after Randle made the first of two free throws, but consecutive 3-pointers by Harris and Milton gave Philadelphia breathing room.

Harris had 23 points in the opening half to help Philadelphia to a 61-46 lead at the break. Milton went 4-for-4 from the field including three 3-pointers in the first half. Randle had 15 points at the intermission for the Knicks.

New York got within four points on Moe Harkless’ 3 with 5:09 left in the third period. But Philadelphia had an 87-79 advantage to start the fourth.

Embiid sat for the 17th time this season due to injury or suspension.

Simmons missed his third game. Injured in a practice, he has a nerve impingement in his lower back and will miss at least two weeks.

Milton finished 5-for-5 from 3-point range.

“For me, it’s just about staying ready and putting in the work,” he said.

76ers: Brown pushed back against a published report in which Robinson said his role hasn’t been clearly defined since the 76ers acquired him from Golden State. “That is not true,” Brown said. “He has an important role and we hope to see more of it. This is a ‘show me’ league.” Robinson had four points. … Race car drivers Mario Andretti and his son, Marco, rang the replica Liberty Bell before the game.

Knicks: Open a five-game homestand against Chicago on Saturday.

76ers: Begin a four-game trip at the Clippers on Sunday.