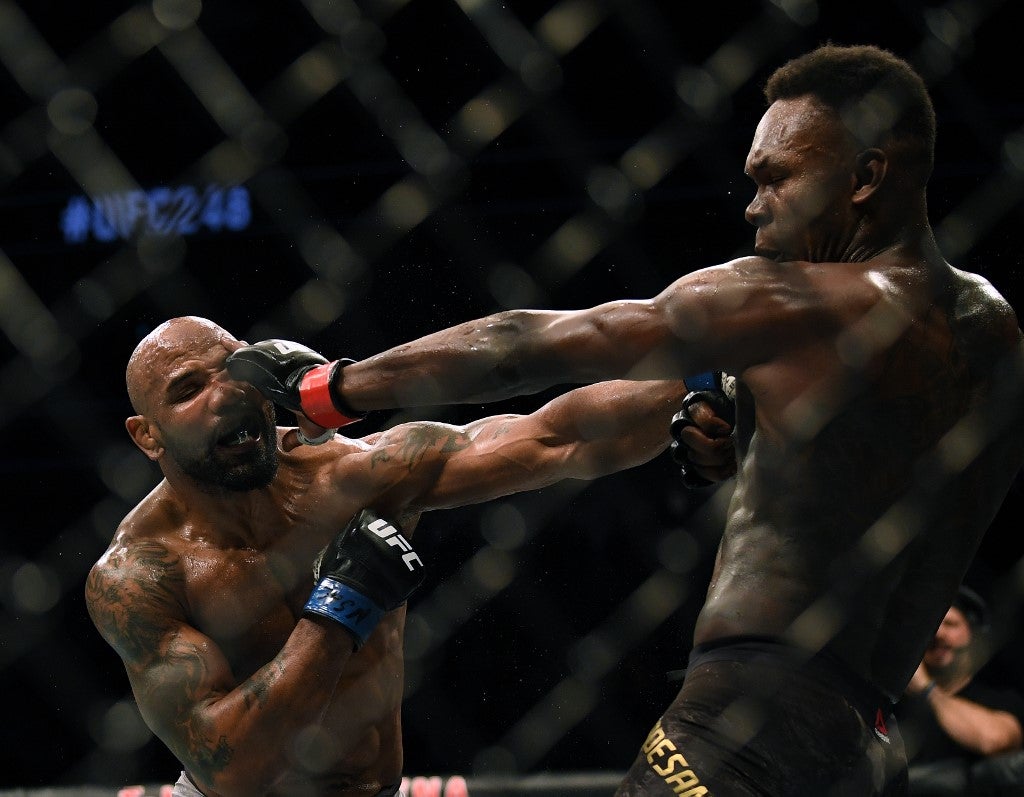 Israel Adesanya then defended his middleweight title with a dull unanimous decision over Yoel Romero in the main event at T-Mobile Arena in the UFC’s hometown.

Zhang (21-1) and Jedrzejczyk (16-4) traded brutal punches and kicks throughout five technically fascinating rounds, badly damaging each other’s faces. After the last of several standing ovations from the Las Vegas crowd, Zhang won the fight 48-47 on two judges’ cards, while Jedrzejczyk won 48-47 on the third.

“I had a long way to get here,” said Zhang, who had to move her training camp out of China due to the coronavirus outbreak. “It was very serious, but we made it. I’m so happy now.”

After Zhang and Jedrzejczyk put on one of the most viscerally entertaining bouts in recent UFC history, Romero and Adesanya staged a snoozer that had fans booing and chanting obscenities.

Romero (13-5) fought an extraordinarily passive fight. Adesanya appeared unable to figure out a way through the 42-year-old Brazilian’s defenses, but his efforts mattered more to the judges.

“I did what I had to do to win this fight,” Adesanya said. “He’s out there trying to lure me into a false sense of security. I needed 25 minutes of focus. You can’t (fight) with somebody who doesn’t want to dance.”

The Vegas crowd still got its money’s worth from Zhang and Jedrzejczyk, whose pre-fight animosity carried straight into an uncommonly brutal bout in which the fighters traded big punches to the face from the opening round. Zhang’s superior punching power appeared to make the difference early, and Jedrzejczyk’s face showed every ounce of it late.

But Jedrzejczyk gathered herself late in the second round and had an outstanding third, switching to a southpaw stance and battering Zhang. The fourth round was more of the same brute punishment for both fighters.

Jedrzejczyk’s forehead and eyes began to swell badly in the fifth round, while Zhang bled from cuts on her face. The fighters embraced in the cage afterward.

“She did great,” Jedrzejczyk said. “We both put on one hell of a performance. I’m proud of myself and my team.”

Zhang became the UFC’s first Chinese champion last year, and she is a key to the promotion’s hopes of growing in the world’s most populous nation. The personable brawler jumped at the chance to take on Jedrzejczyk, who defended the strawweight belt five times.

Jedrzejczyk was the UFC’s strawweight champion from March 2015 until November 2017, when she took the first of two straight losses to Rose Namajunas. After a failed attempt to move up to bantamweight, she returned to 115 pounds and quickly earned another title shot.

In the main event, Adesanya’s fearsome counterpunching skills were useless largely because Romero barely threw a punch in the first two rounds. Adesanya appeared unable to figure out how to penetrate Romero’s defenses, and Romero did well on the few occasions that he tried fighting offensively in the first four rounds.

Adesanya only joined the UFC in February 2018, but the Nigeria-born, New Zealand-raised fighter has been among the UFC’s fastest-rising stars since the moment he hit the cage. He won his first seven UFC fights while displaying his incredible athleticism and all-around skills, steamrolling the middleweight division once ruled by pound-for-pound legend Anderson Silva.

Zhang has similar potential to be part of the UFC’s desire for global growth. She is wildly popular in China, where MMA is rising in significance.

Before the title fights, lightweight Beneil Dariush knocked out Drakkar Klose in the second round with one perfect left hand at the end of a spectacular back-and-forth sequence. Dariush (18-4-1) was staggered by Klose before he responded by stalking Klose across the canvas and landing the left hand that dislodged Klose’s mouthpiece and rendered him unconscious on his feet.

On the preliminary card, elite bantamweight prospect Sugar Sean O’Malley went to 11-0 with a dramatic first-round stoppage of José Alberto Quiñónez. The bout was O’Malley’s first since March 2018, thanks to injuries and multiple positive doping tests.