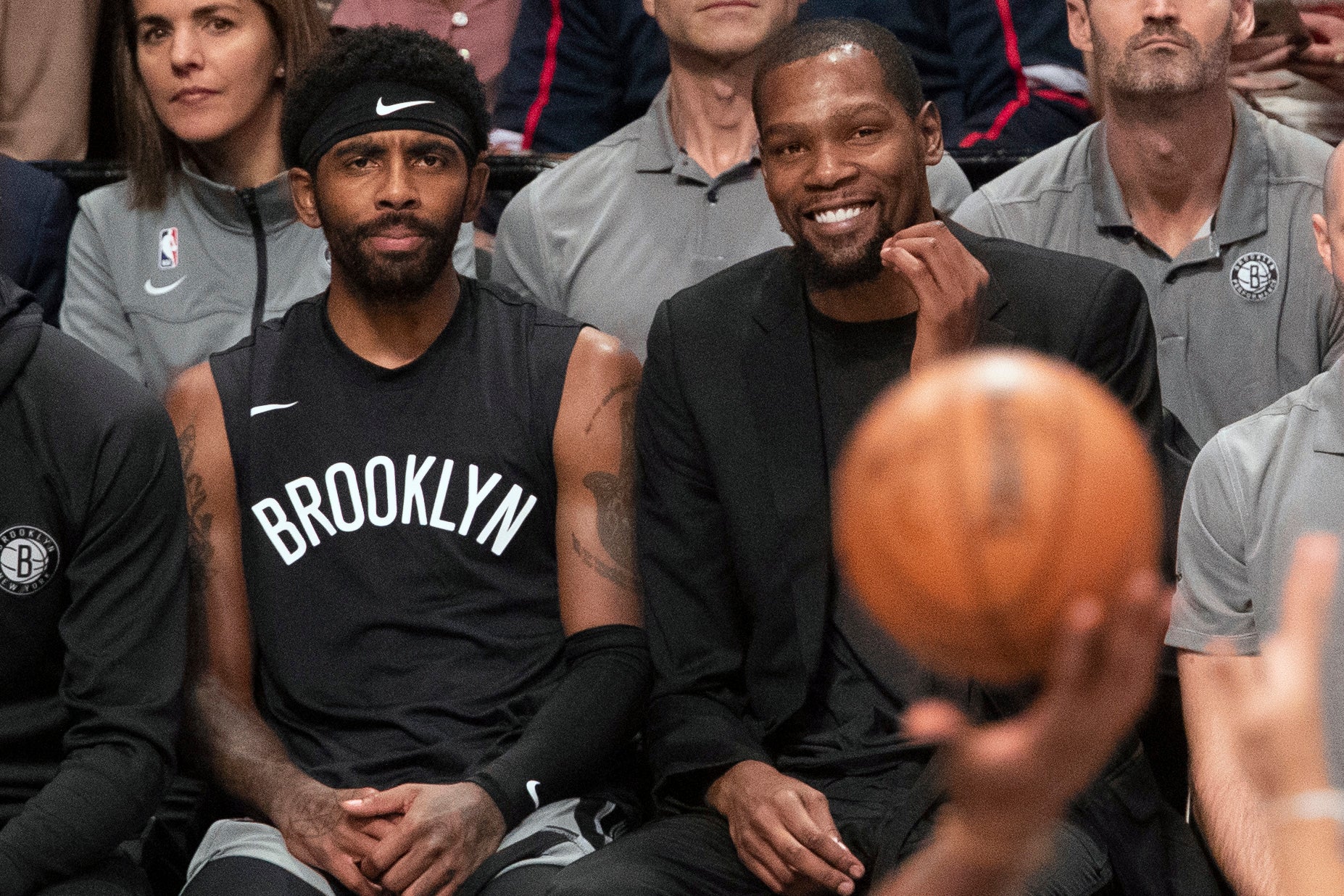 FILE – In this Nov. 1, 2019, file photo, Brooklyn Nets’ Kyrie Irving, left, and Kevin Durant watch the game action from the bench during the second half of an NBA basketball game against the Houston Rockets in New York. (AP Photo/Mary Altaffer, File)

NEW YORK—With so much uncertainty around the NBA season, Brooklyn Nets general manager Sean Marks is no longer ruling out Kevin Durant for the season.

Marks repeatedly had said he didn’t expect Durant to play this season while recovering from Achilles tendon surgery, but he acknowledged Wednesday that everything is unknown now that the season is suspended because of the new coronavirus.

Durant was injured in the 2019 NBA Finals, so he would have a year to recover if the league were to resume in June.

Even Kyrie Irving, who had shoulder surgery on March 3, might be available if play stretched into the summer.

But Marks said he couldn’t even give an answer if the superstars would be able to play this season.

“I don’t think that’s fair, one to those athletes, nor the performance team, to put a timeline on this. I think everybody is dealing with bigger items, far more pressing items,” Marks said during a conference call.

“I do know that those two players are continuing their rehab, but again, when you’re practicing social distancing and you’re in self-isolation, I haven’t physically seen them in three or four weeks. So it’s difficult for me to gauge, let alone the performance team, as to where they are.”

Irving played 20 games during an injury-plagued first season in Brooklyn before undergoing arthroscopic surgery to relieve a right shoulder impingement. There was no timetable for his return.

A potential extra couple of months could benefit the injured players. But with all team practice facilities shut, the time it takes to rehab may be lengthened.

“I think something we have to think about is our facilities are closed and just by getting time off, yes, does that make your body heal and so forth?” Marks said. “But there were several of our players that need the facilities, need game reps, need to be playing, and you could take the other side of this and say that this hiatus has set their rehabilitation back and it’s slowed them.”

And without the team being able to see them, only the players know for sure where they are.

“We’re talking to them and FaceTiming them and so forth, but it’s quite different to having those guys on the court,” Marks said. “And they know their bodies better than anyone else, so at the right time and when they’re a hundred present and they’re up for it, I’m sure they’ll be making those decisions.”

Marks also said that the four Nets players who tested positive for COVID-19 have completed their two weeks of quarantine and are now symptom-free. Durant had told The Athletic he was one of the players.

Durant had been working out and his participation in the Olympics hadn’t been ruled out before they were postponed a year.

Now, it’s the NBA that might be playing in July or August.

Marks had put everything on hold when the season was suspended March 11, telling the Nets to spend time worrying about their families. Now, they’ve begun having regular interactions through Zoom and FaceTime.

They had changed coaches just before play was halted, and Marks said he’s been impressed the way interim coach Jacque Vaughn and staff have interacted with the players. For now, Marks said he isn’t reaching out to anyone as the possible replacement for Kenny Atkinson.

But there’s plenty more work to do for a team on track to be in the postseason if the NBA is able to have one.

“I think they’re turning over every rock they possibly can to play and looking at every different outcome,” Marks said. “From a team perspective, all I can say is we have to be preparing for everything.”