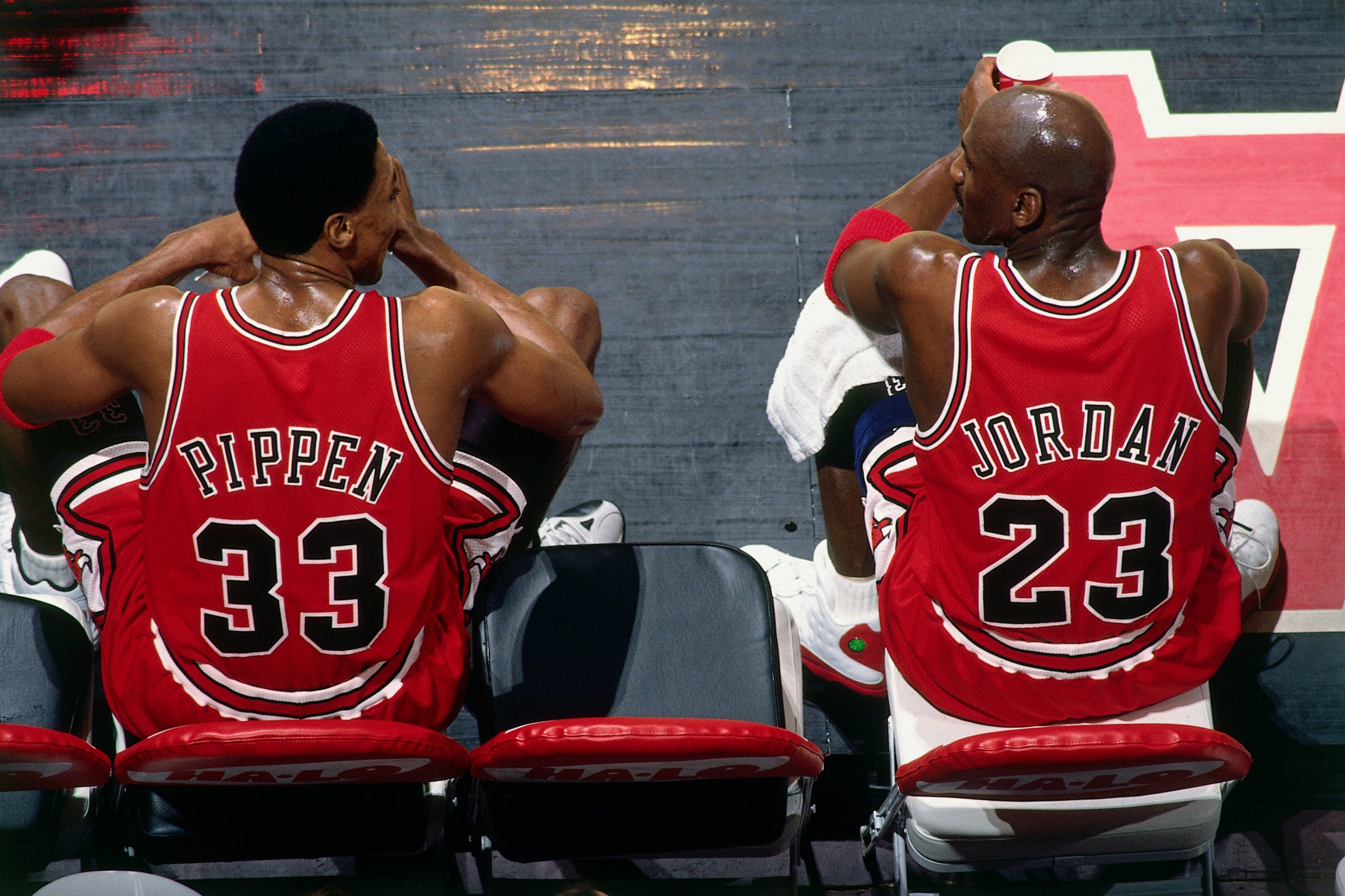 Scottie Pippen #33 and Michael Jordan #23 of the Chicago Bulls sit on the bench during the game against the Vancouver Grizzlies at General Motors Place on January 27, 1998 in Vancouver, British Columbia, Canada. Copyright 1998 NBAE (Photo by Andy Hayt/NBAE via Getty Images) Photo courtesy of Netflix

Clad in a black Chicago Bulls practice uniform and a pair of Concords, Michael Jordan takes shots inside the team’s training facility by his lonesome. His voice then pipes in, reducing the ambient noise of the bouncing ball to the background.

“We had just finished winning a fifth title,” Jordan’s voiceover says. “It’s a bit of uncertainty and management started talking about the franchise is gonna change or we’re gonna rebuild.”

The scene highlights the first 10 minutes of the first episode of “The Last Dance,” a 10-part documentary produced by ESPN that will drop on Netflix on Monday. Those opening minutes set the tone of the documentary, which tells the story of the Bulls’ chase for a sixth title in the 90s—one fraught with drama that enveloped the squad even before the 1997-98 NBA season began.

Spoiler alert: The Bulls end up winning the title. The team breaks up thereafter. And the opening minutes of The Last Dance foreshadows those events perfectly.

“After the fifth championship, we were looking at this team and we realized other than Michael, the rest of the guys were probably at the end of their high-productive years,” said Bulls owner Jerry Reinsdorf. “We had to decide whether we keep the team together or not and we realized this was the time to do a rebuild and not try to win a sixth championship.”

It was a decision Bulls GM Jerry Krause made clear when he told coach Phil Jackson before the season started and after signing him to a one-year extension that he wasn’t coming back the following year, even if he went 82-0.

Krause, often cast as the villain who dismantled a dynasty, is a polarizing figure in the documentary. Reinsdorf and center Bill Wennington remember him as a nice guy, the kind who was great around kids. But as Episode 1 of the documentary shows, he was eager to break up the ageing Bulls squad and grease the wheels of a rebuild.

Krause told Jackson there was no job waiting for him after the 1998 season. He might have told Jordan to scram as well. APRIL 2: Michael Jordan #23 and Phil Jackson of the Chicago Bulls look on against the Miami Heat on April 2, 1996 at Miami Arena in Miami, Florida. Copyright 1996 NBAE (Photo by Andrew D. Bernstein/NBAE via Getty Images) Photo courtesy of Netlfix

“If Phil’s not coaching, I’m not going to be part of a rebuild,” Jordan said.

Bulls fans all over the world will most likely get to relive the what-ifs with the documentary. What if management had squeezed all it could from the core of the champion team?

For Jordan, that was how the Bulls dynasty should have played out.

Immediately after winning their sixth title on June 13, 1998, Jordan addressed the uncertainty surrounding the team during a post-game interview.

“We are entitled to defend whatever we have until we lose it,” he said, scoffing at the idea of starting from zero anew. “No one’s guaranteeing rebuilding is gonna be two or three, four, five years.”

“The Cubs have been rebuilding for 42 years.”

But Reinsdorf and Krause had other plans. And in announcing those plans before the season, they inadvertently balled the Bulls into one united force that would tear through the NBA with only one goal in mind. When they reached the end, they would do so as champions.

“Phil always looked for a theme every season,” said Bulls guard Steve Kerr, now the coach of the Golden State Warriors. “And given that it was the last year we were going to be together, in typical Phil fashion, you know, he had a name for it.”

As the team gathered for its first official meeting before the season began, Jackson began distributing handbooks to the players. Wennington took his copy and looked at the cover page.

It read: The Last Dance. INQ