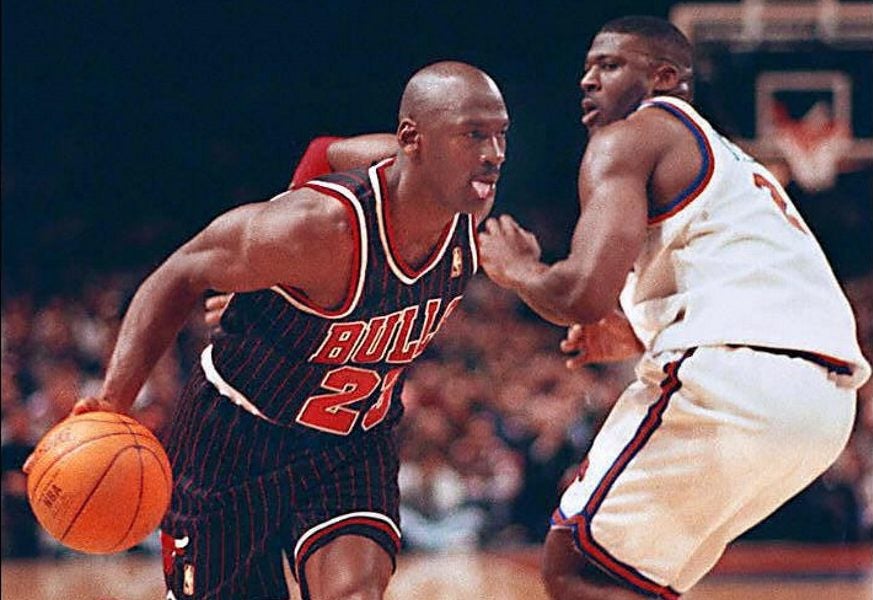 FILE – Michael Jordan (L) of the Chicago Bulls leaves Larry Johnson of the New York Knicks behind as he drives to the basket in the second quarter of their game at Madison Square Garden in New York. AFP PHOTO/Stan HONDA

But out of all the places he played in, Jordan said Madison Square Garden, the home of the New York Knicks, was his favorite stomping ground.

Several of Jordan’s long list of iconic performances happened at the Garden, which include a 55-point night in just his fifth game back from a 17-month layoff in 1995 and a 50-piece in 1986 to name a few.

Then there was his final game in New York as a Chicago Bull on March 8, 1998, which he vividly remembered in the fifth episode of “The Last Dance” documentary series airing Monday.

What made that game extra special was Jordan decided to pay a tribute to the Garden by wearing an OG pair of the Air Jordan 1 “Chicago” released in 1984.

The only problem was the pair he wore was a size too small that caused his feet to bleed by halftime.

But Jordan being himself, he never took it off and just kept scoring at will against the Knicks.

“I couldn’t take those shoes off fast enough. And when I took the shoes off, my sock was soaked in blood,” Jordan said as quoted by ESPN.

Jordan finished with 42 points, eight rebounds and six assists to lead the Bulls to a 102-89 win.

“It’s kind of fun to come back here and play, and remember some of the old days and some of the things, some of the games that I’ve had here, and the shoes was a part of that. My feet are killing me,” he said during the post-game interview.