ONE Championship making deliberate plans for return to cage 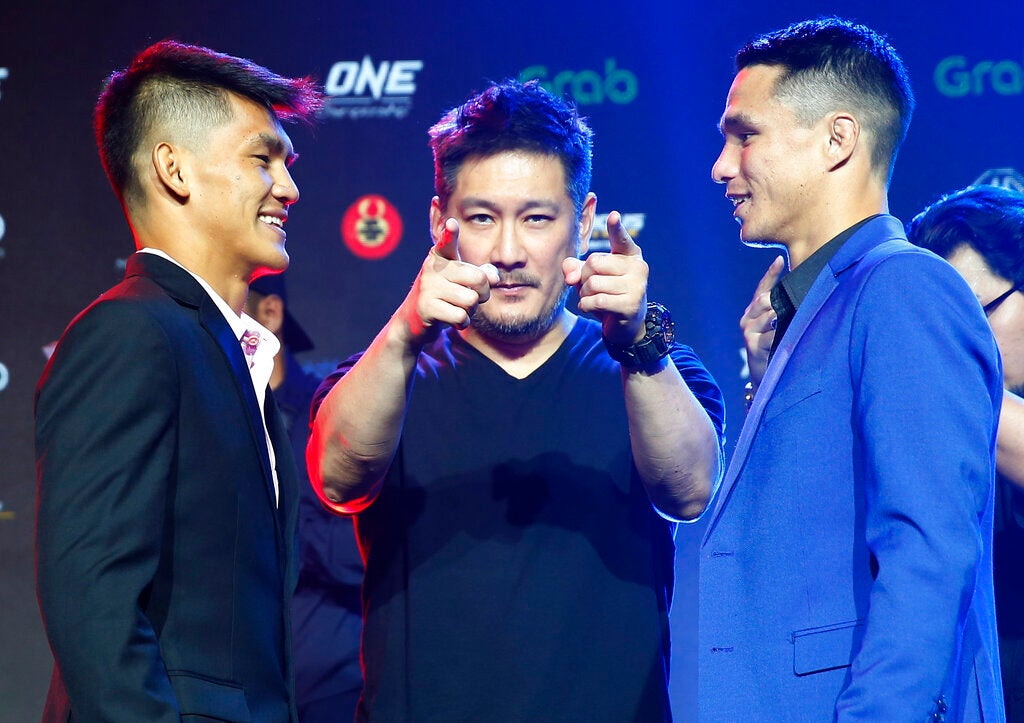 FILE – In this Tuesday, July 30, 2019 file photo, Chatri Sityodtong, Chair and CEO of ONE Championship, center, gestures as Reece McLaren, right, of Australia and Danny Kingad, left, of the Philippines face off during the media presentation for this Friday’s ONE Championship mixed martial arts fight dubbed: Dawn of Heroes. (AP Photo/Bullit Marquez, File)

Sityodtong still plans to be a bit more measured on his own path to get ONE Championship back in the cage during this unprecedented public health crisis.

ONE Championship definitely will return to action this summer, Sityodtong told The Associated Press on Wednesday. But the promotion has not finalized a date or location for its first fights.

Sityodtong is working with government officials and health experts on the fastest path back in China, Thailand and Singapore, ONE Championship’s hometown. Once he finalizes his plans, Sityodtong plans to speed up ONE’s calendar to hold as many events as prudently possible in 2020.

But ONE Championship, which held its most recent show Feb. 28, is proceeding down this difficult path more deliberately than the UFC.

“Of course I give mad respect to Dana White for having the courage and the vision to pull off events in such a tricky time,” Sityodtong told the AP. “At ONE Championship, we have the same level of intensity, but I would say we are a little more prudent, because safety is our highest priority. We are not in a rush to come back just for the sake of coming back due to our financial commitments to broadcasters and brands and whatnot. We want to come back in an environment where we are sure that we can do it safely for all parties involved.”

Sityodtong also faces far different public health obstacles than the UFC, which came up with a detailed safety protocol that assuaged athletic commissions in Florida and Nevada.

ONE Championship holds its fights all around the Pacific Rim and Asia, appearing in nine countries in 2019. Each nation provides unique health concerns, different fighter visa issues, and larger governmental regulatory bodies to appease than a state athletic commission.

“Different governments have different policies on their borders, as well as their lockdown policies, so that’s been a little bit tricky in getting everything up and running,” Sityodtong said. “But my team and I have been working on it nonstop, and we feel pretty good about it.”

In particular, Singapore has employed stringent measures to slow the spread of COVID-19. All sports in Singapore were halted nearly three months ago, and sports facilities in the wealthy island nation have only recently reopened. The soccer players in the Singapore league, the nation’s only pro sports league, still haven’t returned to training.

ONE Championship’s two most recent shows were in Singapore in late February, and Sityodtong is working with government officials to secure special access to the country for incoming fighters.

Sityodtong says he isn’t worried about trailing the UFC, which returned to action several months before the world’s other prominent MMA promotions. The UFC will hold its sixth show since returning this weekend in Las Vegas, and it plans two more shows in its hometown before the promotion decamps to Abu Dhabi next month for four shows on Yas Island.

Bellator still hasn’t announced a firm date for its return, while the Invicta promotion just announced plans for a show July 2 in Kansas, ending a nearly five-month absence. The Professional Fighters League scrapped its entire 2020 season, focusing its efforts on a strong return in 2021.

Sityodtong’s deliberate attitude toward ONE’s return fits the overall image of his Asia-centered promotion, which eschews the heavy-metal-and-testosterone flavor of the UFC and strives to create a brand of MMA focused on heroic storytelling and redeeming values.

But Sityodtong admits he’s also following the drama in the more combustible world of the UFC, where White’s disputes with Jon Jones and Jorge Masvidal over fighter pay have combined with Conor McGregor’s third abrupt retirement to rock the sport.

ONE Championship has signed the likes of former UFC champions Demetrious Johnson and Eddie Alvarez in recent years. Sityodtong would never discuss poaching contracted fighters from the UFC, but he’s always paying attention.

“We’re always talking to the top free agents around the world,” Sityodtong said. “Many managers have reached out to us, and we’re definitely interested in adding to our roster. I am a fan of Jorge Masvidal. There’s a lot of great guys out there. But we’re not going to do anything that would infringe upon contracts with the UFC.”